How to watch UFC 259 Adesanya vs Blachowicz live in Australia

How to watch UFC 259 Adesanya vs Blachowicz live in Australia UFC middleweight champion Israel Adesanya is going up a division to fight Jan Blachowicz for the UFC light heavyweight title in Las Vegas.

SUMMARY: You can watch the preliminary rounds from UFC 259 for free on any device with Kayo Sports by using this 14-day trial. The only way to watch the main card is on pay-per-view via UFC Fight Pass, Main Event or PlayStation.

This will be the first time a 185-pound champion has contested the 205-pound belt. Adesanya is hoping to create history as the only fighter to ever move up 20 pounds (9kgs) to win a UFC title.

The New Zealand-based Nigerian (20-0-0 record) told ESPN recently he is likely to be significantly less than 205 pounds (93kg) come fight time. "If I fought a guy that was 300 pounds, I could probably still beat him," the 31-year-old said.

Adesanya defended his middleweight title for the second time with a second round beating of Paulo Costa at UFC 253 in September last year. Poland's Blachowicz (27-8-0) caused an upset when he knocked out Dominic Reyes in the second round on the same card.

On a stacked card, there are two other belts on the line. Amanda Nunes, the biggest name in the women's game, defends her featherweight title against Australian Megan Anderson in the co-main event. Just prior to that, Petr Yan will aim to retain his bantamweight title when he faces Aljamain Sterling.

When is UFC 259 Blachowicz vs Adesanya?

The early prelims start at 10am AEDT, with the prelims getting underway at 12pm AEDT at the UFC APEX arena in Las Vegas. The main card will start at 2pm AEDT. Expect the main event to get underway around 4pm AEDT.

How to watch UFC 259 Adesanya vs Blachowicz

As usual you have a variety of options for catching the different stages of UFC 259. The preliminary card is on ESPN, with the main card exclusive to pay-per-view on Main Event. Take a look at our complete guide to watching the UFC for more information.

How to watch UFC 259 preliminary card

In Australia, you can find ESPN content on Foxtel iQ, Kayo Sports, Foxtel Now and Fetch TV. UFC Fight Pass is also another option for this event. Among those, Kayo is the pick for the preliminary card and more than 50 other live sports.
Live stream UFC 259 prelims on Kayo Sports

If you are yet to try Kayo Sports, it has a 14-day free trial. After the trial period, a Basic subscription is $25 a month which allows you to watch on 2 screens. There is also a Premium option for $35 a month that gives you another screen. You can check out our Kayo review for more information.

Kayo also has a wide range of special features, such as SplitView, where you can watch four sports on the same screen. The platform is compatible with a wide range of devices, including Android and iOS, Android TV, Telstra TV, Apple TV, Samsung TV (2017 or later), PCs, Macs, Chromecast and AirPlay.

How to watch UFC 259 Adesanya vs Blachowicz main card

The main card of this high-stakes match-up is a pay-per-view event you need to purchase through Main Event. Foxtel, UFC Fight Pass, Fetch TV and PS4 are the providers of the main card. 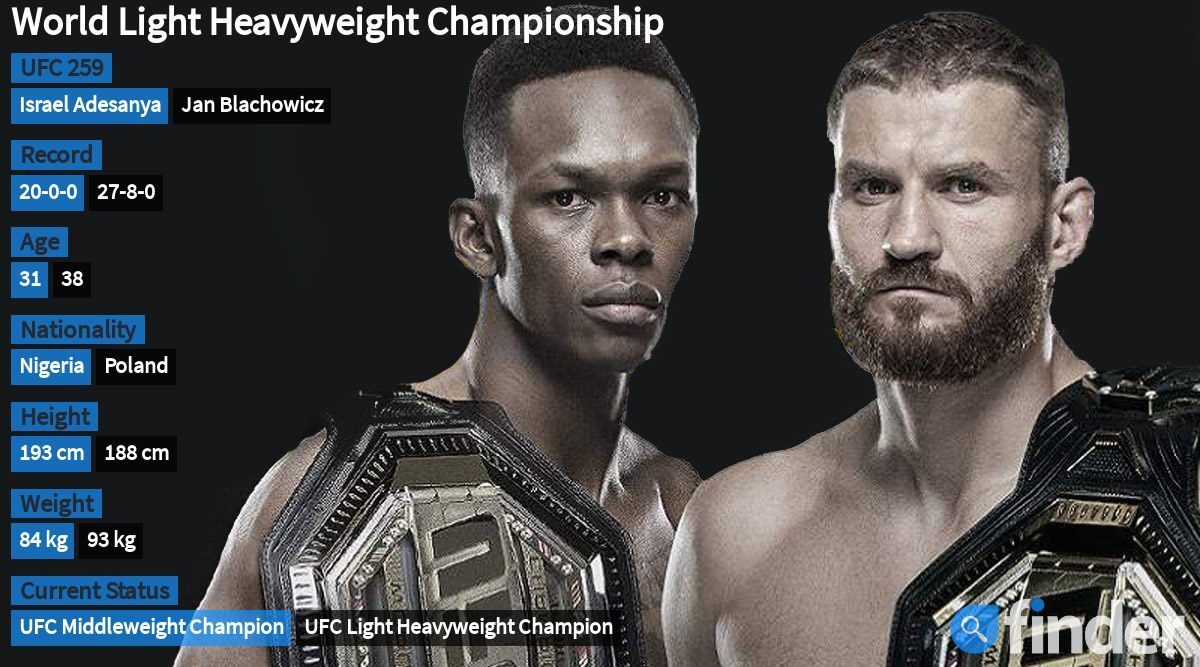 Live stream UFC 259 on your PlayStation 4 or PS5

If you have a PlayStation 4 or 5, look for Live Events in the PS Store. Once you have purchased the fight you can watch it through the "videos" menu. It has the same $54.95 price tag or there is a discounted price of $49.95 if you are a PlayStation Plus member.

Using your Fetch box, go to "manage" and then "subscriptions". Once you have paid the $54.95 purchase price, you can watch it on TV or mobile via the Fetch app.

Who will win UFC 259 Blachowicz vs Adesanya?

The undefeated Adesanya is the heavy favourite to win UFC 259 and rightly so. "The Last Stylebender" has been the UFC middleweight champion since October 2019 with 2 successful title defences. Out of his 20 wins, Adesanya has won 15 via stoppage (5 in the UFC), including thrashing the previously unbeaten Paulo Costa.

But Blachowicz is certainly no chump and has a significant weight advantage so he will be looking to pin down Adesanya and use his power to pull off a boilover. We're tipping Adesanya, who aims to become just the UFC's fifth double champion, to triumph in a battle between his sharp reflexes, speed and unorthodox movement and Blachowicz's "Polish power".