How to watch UFC 251 Usman vs Masvidal live in Australia 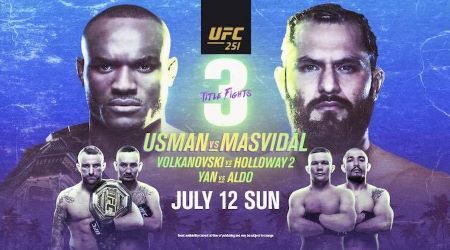 There are three championship fights on the card, including Australia's Alexander Volkanovski, when UFC's Fight Island hosts UFC 251. This is how to watch.

UFC 251 has fight fans bursting with anticipation over the best card put together since the start of the coronavirus pandemic. There is huge interest in the location. Back in April, president Dana White revealed the UFC had a mysterious venue called "Fight Island". It has since been announced as Yas Island in Abu Dhabi. There are four events scheduled there in July.

There are three title belts on the line in UFC 251, one of which has already been rocked by a positive COVID-19 test by welterweight Gilbert Burns. The UFC found a replacement in just six days and the main event is now Kamaru Usman vs Jorge Masvidal. Australia's Alexander Volkanovski also defends his featherweight crown in a rematch with Max Holloway.

When is UFC 251 Usman vs Masvidal?

UFC 251 is being held on Sunday 12 July in the United Arab Emirates. The preliminary card starts at 10am AEST with four fights. There are then five more bouts on the main card starting from midday AEST. Masvidal faces Usman in the main event.

Volkanovski's clash with Holloway is the co-main event and Petr Yan will take on Jose Aldo. The last fight is for the vacant bantamweight title following Henry Cejudo's retirement.

How to watch UFC 251 Usman vs Masvidal

For a top-shelf UFC event, there are a variety of viewing options in Australia. The preliminary fights are on ESPN. The main card is then exclusive to pay-per-view on Main Event. Take a look at our complete guide to watching the UFC.

How to watch UFC 251 preliminary card

The prelims get underway at 10am AEST on ESPN. You have a range of options to access ESPN, including Foxtel iQ, Kayo Sports, Foxtel Now and Fetch TV. UFC Fight Pass is another option. Among those, Kayo is the pick for the prelims and loads more live sport.

Kayo has access to more than 50 sports, including every UFC Fight Night and the UFC 251 prelims. The platform currently has a 14-day free trial. After that a Basic subscription is $25/month which allows you to watch on 2 screens. For $35/month a Premium subscription gives you another screen.

Kayo also has a range of features, such as SplitView, where you can watch four sports at once. It is compatible with Android and iOS devices, Android TV, Telstra TV, Apple TV, Samsung TV (2017 or later), PCs, Macs, Chromecast and AirPlay.

You can check out our full Kayo review for more detailed information.

How to watch UFC 251 Usman vs Masvidal main card

You need to purchase the main card to watch it live or on replay. Main Event on Foxtel, UFC Fight Pass, Fetch TV and PS4 are the providers of the main card.

UFC 251 costs $54.95 on Main Event with a Foxtel subscription and you have a few options in terms of ordering. You can go through the Main Event website, your Foxtel remote, with the My Foxtel app or over the phone. You can also order UFC 251 if you have Optus TV featuring Foxtel over the phone. Ordering through a phone agent will incur an additional $2 booking fee.

You can also catch all the action of UFC 251 through UFC Fight Pass. The UFC's own streaming service also costs $54.95 to access this event. You also have the option of subscribing to Fight Pass for $10.99/month or $104.99 for an annual pass. It is compatible with Apple TV, Xbox One, Xbox 360, Amazon Fire TV, iPad, iPhone and Android devices, Chromecast, PCs and Macs, Samsung smart TVs, Roku and LG smart TVs.

If you have a PlayStation 4, look for Live Events in the PS Store. Once you have purchased the fight you can watch it through the "videos" menu. It costs $54.95 or there is a discounted price of $49.95 if you are already a PlayStation Plus member.

Using your Fetch box, go to "manage" and then "subscriptions". Once you have paid the $54.95 purchase price, you can watch it on TV or your mobile using the Fetch app.

Who will win UFC 251 Usman vs Masvidal?

What an incredible schedule of fights there are for MMA fans. Holloway will be determined to square the ledger with Volkanovski and we think the American is a big chance. Many also feel veteran Jose Aldo is fortunate to get a chance for a vacant belt against Petr Yan. It will be some upset if Aldo manages to become a two-division champion.

As for the main event, Usman has a highly impressive 16-1 win-loss record and hasn't lost a fight since way back in 2013. He takes on Jorge Masvidal, his original opponent for this fight before contractual issues got in the way. Masvidal is 35-13 from his 48 fights, winning all 3 fights he contested in 2019. This is a tight one to call, but it's hard to lean towards anyone but Usman right now whenever he enters the Octagon.

Watford have disrupted a few parties this year and they'll be looking to do the same with Chelsea.