How to watch UFC 250 Nunes vs Spencer live in Australia 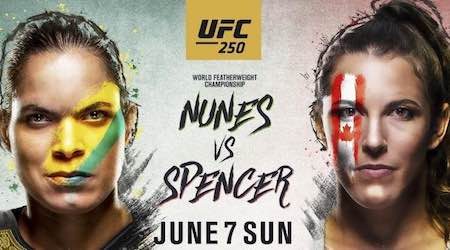 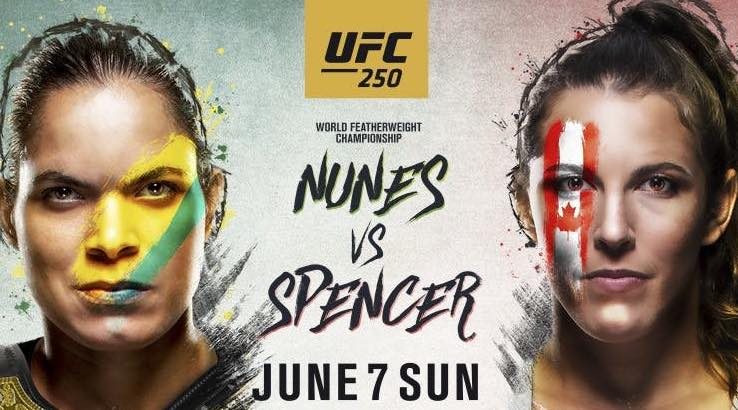 Superstar Amanda Nunes defends her Featherweight Championship against Felicia Spencer. This is how to watch UFC 250 live.

UFC 250 Nunes vs Spencer is a women's featherweight championship bout set for the purpose-built UFC APEX facility in Las Vegas. Amanda Nunes is a 2-division champion currently riding a 10-fight winning streak. The 32-year-old Brazilian is an overwhelming favourite to make that 11 straight when she takes on Canadian Felicia Spencer.

Nunes, who also holds the bantamweight title, is making her first defence of a belt she won with a 51-second knockout of Cris Cyborg back in December 2018. She has fought twice at bantamweight since then. The co-main event involves former bantamweight champion Cody Garbrandt and veteran Brazilian Raphael Assuncao in a likely title-fight eliminator.

There are four fights scheduled on the preliminary card, which gets underway at 8am AEST on Sunday 7 June. The main card then kicks off at midday with a further five clashes lined up.

How to watch UFC 250 Nunes vs Spencer

As fans will now be accustomed, there are a number of details needed to catch all of a UFC main event in Australia. ESPN will be showing the preliminary fights, while the main card is exclusive to pay-per-view on Main Event. You can see our complete guide to watching the UFC here.

How to watch UFC 250 Nunes vs Spencer preliminary card

The prelims on ESPN start from 8am AEST. That leaves Foxtel iQ, Kayo Sports, Foxtel Now, Fetch TV and UFC Fight Pass as your viewing options. Among those, Kayo is the pick of the bunch for live sport given its free trial.

How to live stream UFC 250 via Kayo Sports

Kayo traditionally offers more than 50 sports for you to choose from. Right now the platform has every game of the NRL season live, plus hundreds of hours of timeless content to keep you entertained as sports start to come back following the coronavirus pandemic.

Kayo also has access to every single Fight Night and the prelims for UFC PPV's. In terms of cost, a Basic subscription is $25/month which allows you to watch on 2 screens. For $35/month a Premium subscription gives you an additional screen.

Kayo has a 14-day free trial so you can see if it is right for you. It also boasts a range of features, such as SplitView, where you can watch four sports at once.

How to watch UFC 250 Nunes vs Spencer Main Card

Main Event on Foxtel, Fetch TV, UFC Fight Pass and PS4 are the providers of the main card. You will need to purchase the fight to watch it live or catch a replay through one of these options.

If you have a Foxtel subscription, UFC 250 costs $54.95. You can order it via the Main Event website, with the My Foxtel app, your Foxtel remote or over the phone. You can also order the fight if you have Optus TV featuring Foxtel over the phone. Ordering through a phone agent will incur an additional $2 booking fee.

The UFC's official streaming site is another option for watching Nunes vs Spencer. It also costs $54.95. You can also opt to subscribe to Fight Pass for $10.99 per month or $104.99 for an annual pass.

Watch Nunes vs Spencer on PS4

If you have a PlayStation 4, you also have access to the fights. Look for Live Events in the PS Store. Once you have purchased the fight you can watch it through the "videos" menu. It costs $54.95 or $49.95 if you are already a PlayStation Plus member.

Using your Fetch box, go to "manage" and then "subscriptions". Once you have purchased the event for $54.95, you can watch it on TV or your mobile using the Fetch app.

Who will win UFC 250 Nunes vs Spencer?

Spencer has demonstrated her ability with eight wins from her nine fights to date. She bounced back from her sole defeat to Cris Cyborg by unanimous decision in July last year with a first-round TKO of Zarah Fairn Dos Santos to earn her shot at Nunes.

But at this stage it would take a very brave pundit to bet against Nunes. The UFC Octagon is her playground right now and until someone finds a way to stop her, we at Finder won't be predicting anything but a victory for the sensational Brazilian.