How to watch UFC 248 Adesanya vs Romero live in Australia: Updated

How to watch UFC 248 Adesanya vs Romero live in Australia: Updated 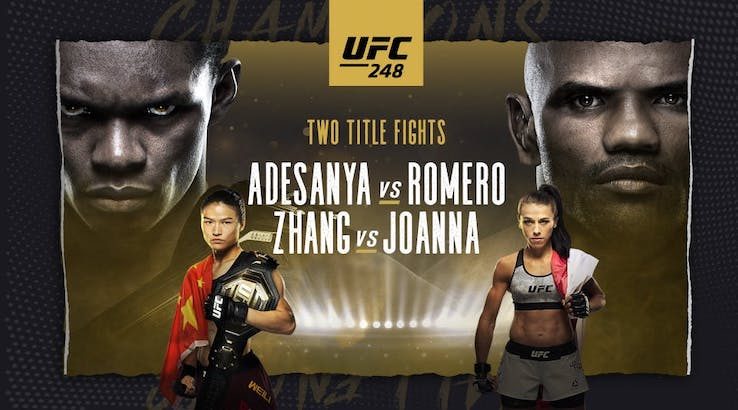 UFC 248 Adesanya vs Romero headlines a packed card for UFC248 at T-Mobile Arena in Las Vegas. Brash, unconventional middleweight Israel Adesanya called out veteran Yoel Romero as the man he wanted to face for his first championship defence.

The undefeated Nigerian-born Kiwi is desperate to fast-track his legacy. Victory over Romero, one of the sport's greatest ever exponents, would certainly add a little lustre to his already impressive resume.

What time does Adesenya vs Romero UFC 248 start in Australia?

You can tune in on Sunday 8 March. The preliminary card begins today at 12pm (AEDT) while the main card starts at 2:00pm.
Here's the expected time you need to be at the ready for Adesenya vs Romero depending on where in Australia you are.

How to watch UFC 248 Adesanya vs Romero

As usual, it's a bit of a mixed bag when it comes to watching UFC 248. ESPN is showing the preliminary fights, while the main card is exclusive to pay-per-view on Main Event. You can see our complete guide to watching the UFC here.

How to watch UFC 248 Adesanya vs Romero preliminary card

The prelims are on ESPN, with the broadcast starting from midday AEDT. So you can follow along with Foxtel, Kayo Sports, Foxtel Now, Fetch TV and UFC Fight Pass. Among these options, Kayo is the pick for live sport.

How to live stream UFC 248 via Kayo Sports

Kayo has more than 50 sports for you to choose from, including access to every single UFC Fight Night. In terms of cost, a Basic subscription is $25/month which allows you to watch on 2 screens. For $35/month a Premium subscription gives you 3 screens.

Kayo currently has a 14-day free trial so you can see if Kayo is right for you. It has a range of features, such as SplitView, where you can watch four sports at once.

How to watch UFC 248 Adesanya vs Romero Main Card

Main Event on Foxtel, UFC Fight Pass, Fetch TV and PS4 are the exclusive providers of the main card. You will need to purchase the fight to watch it live or catch a replay or you could head to your nearest venue.

If you have a Foxtel subscription, UFC 248 costs $54.95. You can order it via the Main Event website, using the My Foxtel app, your Foxtel remote or over the phone. You can also order the fight if you have Optus TV featuring Foxtel, over the phone only. Ordering through a phone agent will incur an additional $2 booking fee.

The UFC's official streaming site is another option for checking out Adesanya vs Romero. It also costs $54.95 through UFC Fight Pass. You can also opt to sign up for Fight Pass for $10.99 per month or $104.99 for an annual pass.

Stream Adesanya vs Romero UFC 248 on your PlayStation 4

If you have a PlayStation 4 console, you also have access to the fights. Look for Live Events in the PS store. Once you have purchased the fight you can watch it through the "videos" menu. It is $54.95 or $49.95 if you are a PlayStation Plus member.

Using your Fetch box, go to "manage" and then "subscriptions". Once you have made the purchase for $54.95, you can watch it on TV or your mobile using the Fetch app.

Which pubs are showing Adesanya vs Romero?

These are the venues in Australia that are licensed to access PPV events via Main Event. Though we recommend ringing ahead to confirm if they'll be showing UFC 248 Adesanya vs Romero.

Who will win Adesanya vs Romero?

We've had some great UFC match-ups in recent times, but this one has to be right up there.

Romero is an ageless wonder. At 42 years old, he has still retained his quickness and wrestling ability and could provide some problems for the 30-year-old Adesanya.

Both men weigh in at around 94kg, but Adesanya has a significant height and reach advantage. The Kiwi will need to be careful, but he has barely put a foot wrong in his MMA career to date and we see that undefeated record continuing in Vegas.

We're now set and ready to go. Both fighters have made weight meaning the Middleweight Championship is officially up for grabs.

Now the only question that remains is if The Last Stylebender will have another exuberant entrance again.