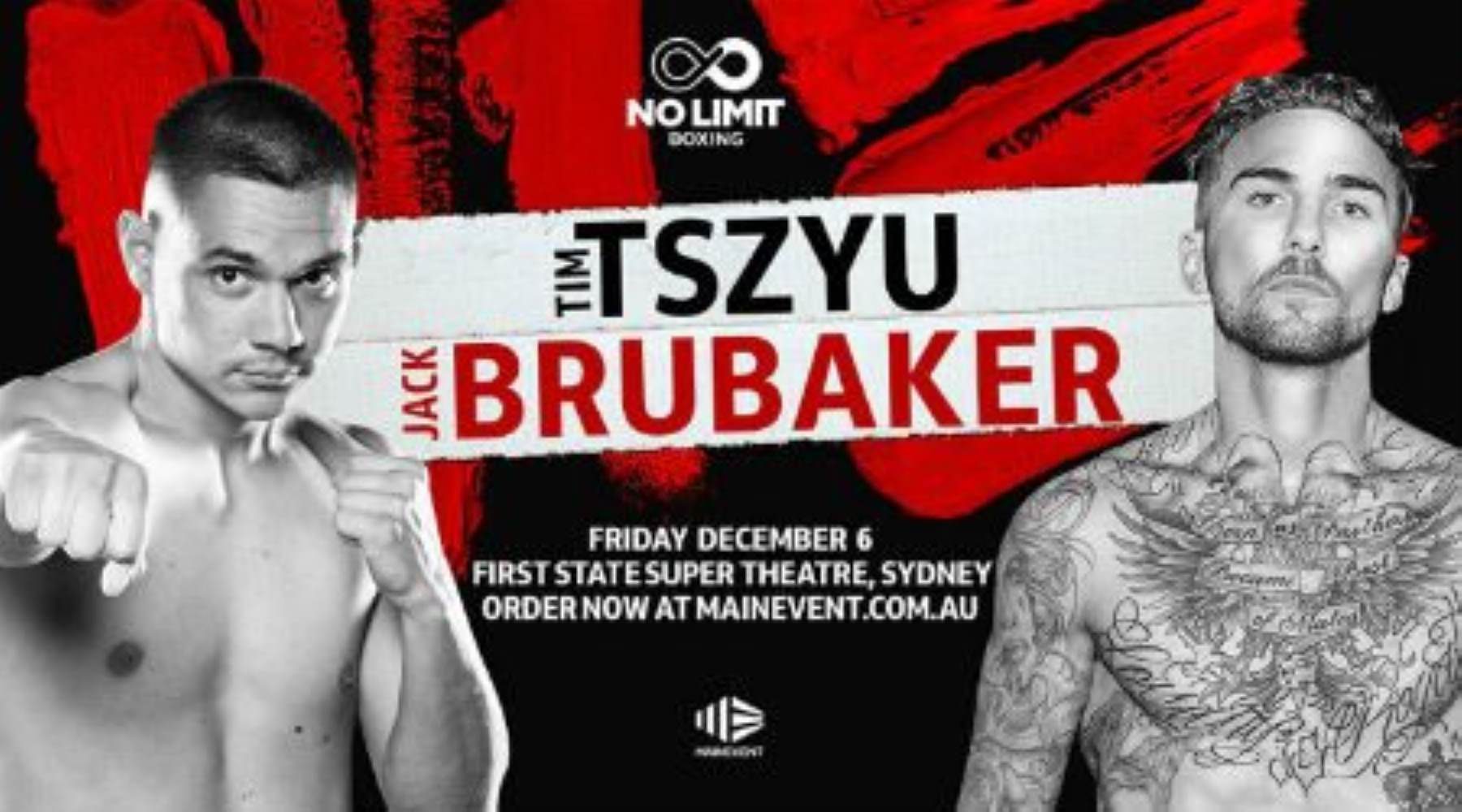 Tim Tszyu and Jack Brubaker go toe to toe for the IBF Australasian Super Welterweight title. Here's how you can watch live.

Promising young boxer Tim Tszyu has massive shoes to fill, trying to follow in the wake of his decorated and hugely popular father Kostya, but the 25-year-old has made the right moves so far in his fledgling career.

Unbeaten through 14 fights, Tszyu will defend his IBF Australasian Super Welterweight title for the first time against the big-talking Brubaker, who has 16 wins, 2 draws and 2 losses in his career.

When is Tim Tszyu vs Jack Brubaker?

This fight is live and exclusive to Main Event, with the program scheduled to start at 7pm AEDT on Friday 6 December. There are 6 fights on the card, with the Tszyu–Brubaker battle likely to start around 9:30pm–10pm AEDT.

How to watch Tim Tszyu vs Jack Brubaker

As Main Event holds the exclusive rights, the only way to watch the fight at home is to order it through a Foxtel subscription via pay-per-view at a cost of $49.95.

Foxtel subscribers can order Tim Tszyu vs Jack Brubaker through the Main Event website, using the My Foxtel app, remote or phone.

Your local pub could also be an option to watch the fight, while to get you in the mood Kayo Sports has a documentary titled Tim Tszyu: All Access, which takes viewers behind the scenes in the lead-up to his last fight against Dwight Ritchie.

Which pubs are showing Tim Tszyu vs Jack Brubaker?

Who will win Tim Tszyu vs Jack Brubaker?

If you listen to Brubaker's pre-fight comments, he expects to make light work of up-and-coming star Tszyu. Few outside of Brubaker's camp believe that will be the case.

Tszyu's biggest concern may be complacency as he has already stated his goal for 2020 is to get his hands on a world title belt.

For now he needs to focus on the 28-year-old Brubaker, an orthodox fighter who has far more experience than his younger opponent and 3 wins and a draw from his past 4 bouts.

It would be a major surprise if Tszyu wasn't to add a 15th straight win to his resume and move on to bigger and better things.

Who will win Justin Hodges vs Darcy Lussick?

Hodges, a former Australia and Queensland representative, has easily won his first 2 fights and is taking on a 30-year-old making his debut in the ring.

If Hodges wins, as widely predicted, next up would be a clash with fellow former Origin star Paul Gallen, which Hodges says would be his final bout before retiring.

At 193cm and 114kg, Lussick has a height and weight advantage over Hodges but clearly lacks experience.

The prop spent time with Manly and Parramatta during his time in the NRL and last season helped the Toronto Wolfpack secure promotion to the UK Super League.