It's sixth versus seventh as the Swans and West Coast clash in a huge game in Geelong in round 16 of the AFL.

SUMMARY: Swans vs Eagles is live on Channel 7 in NSW/ACT and on delay on free-to-air TV in Western Australia. For live coverage across the country, check out Fox Footy. Unless you're already a Foxtel customer, your best option is to watch live on Kayo Sports. You can watch for free using this 14-day trial.

The AFL's decision to bring every team to Victoria means footy fans are in for some rare events. The Sydney Swans hosting the West Coast Eagles in Geelong is perhaps the rarest of them all.

Neither team holds much of a record at Geelong's home ground – we'll get to those later – but previous form at the venue will be way in the background when these fierce rivals of the early 2000s meet to jostle for positions inside the top 8.

When is Sydney vs West Coast?

The opening bounce is at 1:10pm AEST at GMHBA Stadium in Geelong on Sunday 4 July.

How to watch Swans vs West Coast

Channel 7 and Foxtel share the rights to AFL matches in Australia and the broadcasts vary from state to state. As mentioned above Swans vs West Coast is on free-to-air TV in NSW and the ACT. It's not a great result for Eagles fans in WA, as the match is delayed by 3 hours into Perth on Channel 7.

But you can still catch the match live and for free by taking advantage of Kayo Sports or Foxtel Now's free trial. Across the country, Foxtel iQ, Foxtel Now and Kayo Sports each have every game live and on demand.

We have a full guide to watching the AFL season here. Kayo Sports is our pick of the bunch, a platform that allows you to get Fox Sports without committing to Foxtel.

As mentioned you can watch Swans vs Eagles for free using Kayo's 14-day free trial for new users. After the trial, a Basic subscription is $25 a month to watch on 2 screens or $35 a month for a third screen. You can check it all out in our Kayo Sports review.

Kayo also has a wide range of special features you won't find anywhere else. SplitView lets you watch up to 4 sports at once on the same screen. Other features include Interactive Stats, No Spoilers, Key Moments and more.

In total Kayo broadcasts more than 50 sports. After the Swans take on the Eagles, you can watch more AFL with the Bulldogs taking on North Melbourne. You could also switch over to NRL or some live Formula 1 a little later in the evening. 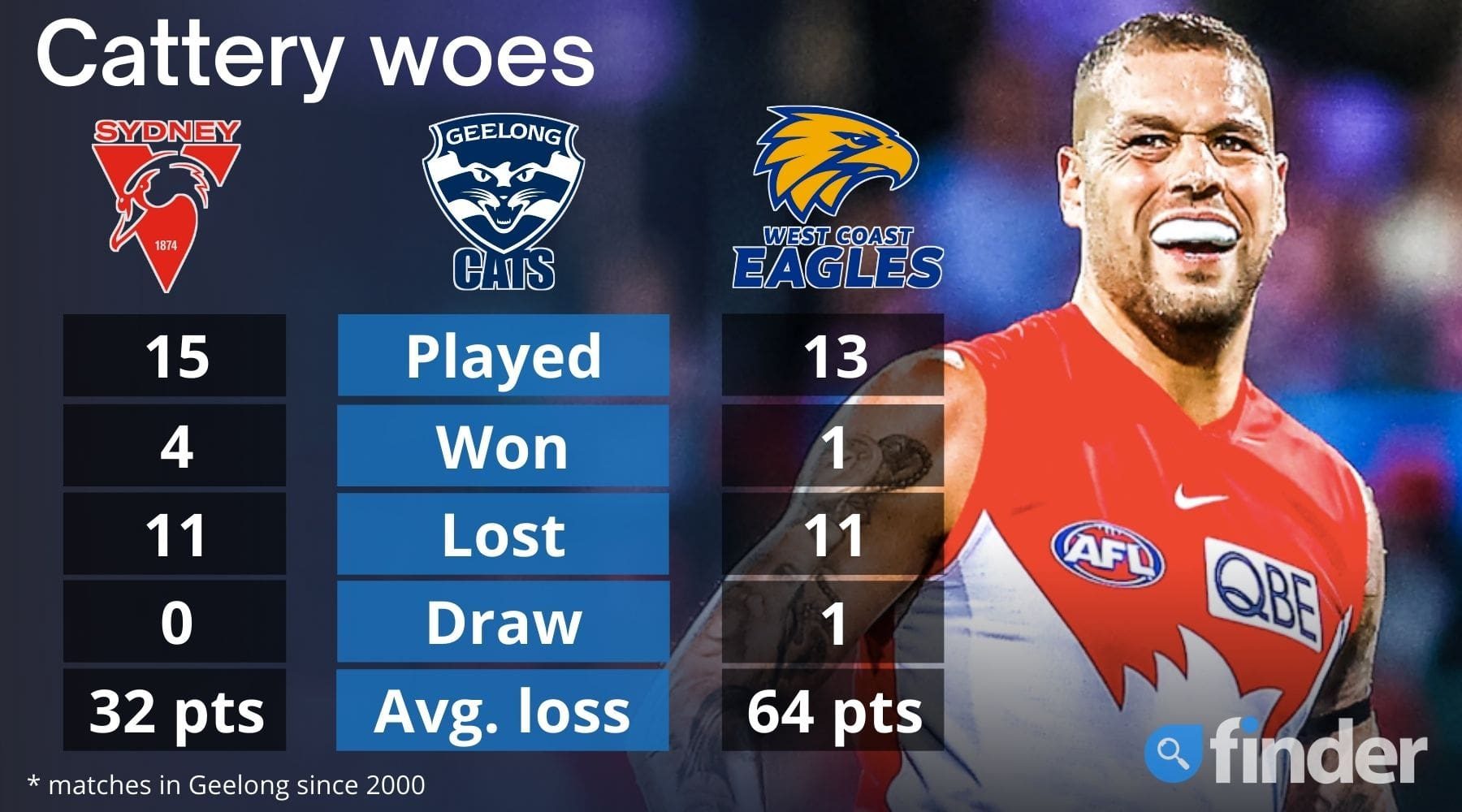 First to the respective records at this ground: since 2000, the Swans have played 15 times at GMHBA Stadium – all against Geelong – winning 4 and losing 11. Those losses have come at an average margin of just over 32 points. Significantly, the Swans have won 3 of their last 4 games at the ground, all of them solid victories over the Cats.

Both carry losing form into this round 16 clash; the Swans having lost their last 2, while the Eagles dropped their last game against the Bulldogs at home.

The Eagles' record isn't good reading for West Coast supporters. The Eagles have played 13 times at the ground since 2000 – again all against Geelong – notching 11 losses, a draw and just the 1 triumph. Their losses have come at an average margin of 64 points. The Eagles played at the ground in April and were smashed by the Cats by 97 points.

Head-to-head, the Swans hold a commanding 12-3 record over the Eagles since 2008, including 3 of the last 4. The Eagles got the chocolates last meeting, though, at neutral venue Carrara on the Gold Coast last year.

Overall at neutral venues – Geelong is a neutral venue for these teams – it's West Coast 2 wins (the other the 2006 grand final at the MCG) and Sydney 1 (the 2005 grand final, again at the MCG). What's all that mean? Perhaps not much.

West Coast had their full midfield contingent playing together for the first time in a year last round. They were humbled by the Western Bulldogs' midfield brigade, a fact noted by Eagles coach Adam Simpson after the game. That same group is available to Simpson this week and will likely run out again. The coach will expect them to gel this week.

Win the midfield and then all the Eagles need to worry about is stopping the great Lance "Buddy" Franklin, with the big fella showing last week against Port Adelaide he retains the form and flair that has made him a superstar for well over a decade.

The Swans hold all the tickets in this game – higher on the ladder, a winning record against their opponents and better form at the ground – but we're terrible tippers. So we think West Coast's better midfield and bigger bodies will end a rotten run in Geelong, defeating the Swans by 7 points.