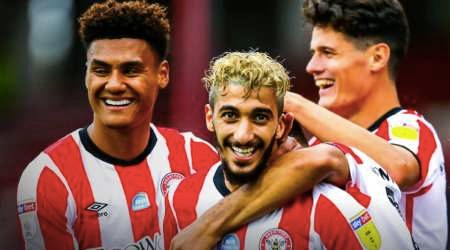 Swansea City take on Brentford in the Championship play-off semi-finals as the race to reach the Premier League intensifies. This is how you can tune in.

The EFL Championship play-offs are here, with four teams battling it out for the incredibly lucrative prize of Premier League football. Brentford lost their last two matches of the season to miss out on automatic qualification by just two points. Those spots were filled by Leeds United and West Bromwich Albion.

Swansea City produced an extraordinary Houdini act on the final day of the season to sneak into sixth place and claim the final play-off spot. Needing to beat Reading, hope Nottingham Forest lost to Stoke City and turn around a significant goal difference, the Swans benefited from all three. Now they will hope to continue their unexpected run against the favoured Bees in the semi-finals.

When is Swansea vs Brentford EFL Championship play-off?

The semi-finals are held over two legs. The opening match is at 3:30am AEST on Monday 27 July at Liberty Stadium in Wales. The second leg will be at Griffin Park in London on Thursday 30 July.

How to watch Swansea vs Brentford in Australia

In Australia, the rights to the EFL Championship are held by beIN SPORTS. That means you have a number of options if you want to catch the excitement of the play-offs. Kayo Sports, Foxtel iQ, Foxtel Now and Fetch TV all give you access to beIN. You can also watch directly via streaming service beIN SPORTS CONNECT.

For full details on watching the EFL, you can check out our comprehensive guide.

If you're a big football fan then you may want to take a look at a streaming service dedicated to beIN SPORTS content. beIN SPORTS CONNECT is the direct broadcaster of some of the biggest leagues in the world including EFL, La Liga and Bundesliga. They also have access to some WTA tennis and rugby union. Best of all you can test it out with a 14-day free trial.

If you are yet to give Kayo Sports a test run, you can watch the semi-finals and so much more for no cost using its 14-day free trial. There are no lock-in contracts and you can cancel at any time.

After the trial period, a Basic subscription then costs $25/month and you can watch your favourite sport on 2 screens or devices. There is also a Premium option for $10 more per month that gives you a third screen.

All up, Kayo has access to more than 50 sports. We have put together a full review of the service for you. It also has an awesome array of special features, such as Kayo Minis, SplitView, Interactive Stats and a Key Moments Timeline.

Who will win Swansea vs Brentford EFL Championship play-off?

The Bees will be kicking themselves at the opportunity missed to secure automatic promotion. But they need to quickly put that aside and focus on the task at hand. The last time Brentford were in England's top flight was way back in 1947.

Swansea City, meanwhile, must almost feel like they are playing with house money. Few expected them to grab sixth position but they pulled it off and must be thinking there's no reason they can't go further. We think Brentford will win the tie, but we'll opt for a 1-1 draw in the first leg.