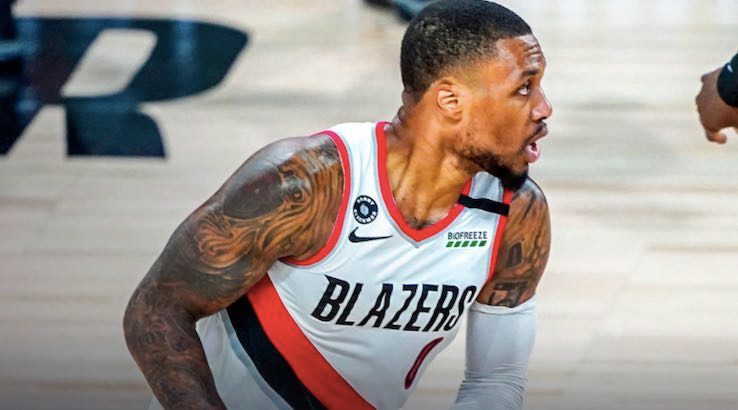 Portland and Memphis are fighting for the final playoff spot in the Western Conference. Here's how to watch the NBA's first ever play-in tournament.

SUMMARY: Portland vs Memphis is exclusive to both ESPN and NBA League Pass. So unless you're already a subscriber to either Foxtel or Fetch TV your best option is to watch to take advantage of League Pass's 7-day free trial or Kayo Sports using this 14-day free trial.

Thanks to a superhuman performance from Damian Lillard in the NBA bubble and a last-second miss from Brooklyn's Caris LeVert, Portland's playoff hopes are well alive. Trail Blazers superstar Lillard scorched his last 3 opponents for 154 points across his last 3 games. Portland are now in the driver's seat to the eighth seed.

They now have the upper hand over Memphis who entered the restart as the NBA's eighth seed, but have now been bumped down to ninth. The pair now meet in the NBA's unique play-in tournament, where only one will prevail and book a first-round date with LeBron James and the Lakers. As Portland finished the higher seed they require a single win.

When is Portland vs Memphis?

It's an early start for the first game between Portland and Memphis, with tip-off scheduled for 4:30am AEST on Sunday 16 August. If a second game is required it'll be played the following day at 6:30am AEST on Monday 17 August.

How to watch Portland vs Memphis live in Australia

As we mentioned earlier, this game is exclusive to ESPN and NBA League Pass. Australians are able to watch ESPN via Foxtel, Kayo Sports, Foxtel Now or Fetch TV. For a further breakdown check out our how to stream NBA guide which includes the playoff TV schedule.

Like the rest of America's big league sports, the NBA also has its own streaming service known as League Pass. It's the only way you can stream every single game from the NBA season live in Australia. Unlike ESPN, NBA League Pass will have every single playoff game live.

Currently League Pass's annual package is available for a flat rate of $68.99 which runs through until the end of October. There's also a monthly pass which is $39.99/month. Either gives you access to every game so you'll see right up to the end of the NBA Finals and the upcoming draft before the annual package will be repriced and auto-renewed.

Kayo is your best bet if you don't want to commit to League Pass. It comes with a free trial twice as long and a cheaper monthly cost compared to League Pass. You can subscribe to Kayo for either $25/month (2 screens) or $35/month (3 screens).

However, it's important to remember while it will have majority of the biggest playoff matches, it relies on ESPN's feed so some teams feature more than others. Similarly to League Pass, Kayo also now has ESPN NBA mini games which are available up to 72 hours after completion of a game.

Kayo also has access to the rest of America's popular sporting leagues such as the NFL, MLB and NHL. Closer to home they have every single game of the NRL and AFL seasons live and ad-free. You can see the full list of sports here.

The NBA's play-in tournament is a special best-of-two series. The eighth seed is only required to win a single game to be able to progress to the NBA playoffs. For the ninth seed they need to win both games. So if the ninth-seeded Grizzlies drop the first game they'll need to pack their bags and head home from the NBA bubble.

Whoever wins takes on the LA Lakers in a best-of-seven series beginning on Wednesday 19 August at 11:00am AEST.

Who will win Portland vs Memphis?

Portland enter requiring just a single win to advance to the playoffs and are heavily favoured to do so. As mentioned Lillard is leading the way scoring at will. However, you can't write Memphis off completely. The Grizzlies were the higher seed for majority of the season. Led by likely rookie of the year Ja Morant the Grizz have pleasantly surprisied everyone.

Basketball can be unpredictable at times and on any given day a team's shot refuses to go in. Add in this with a win or go home aspect and there's a March Madness feel. As basketball fans would know shock upsets are the norm in that scenario. So while we're tipping the Blazers to advance, having to achieve it in two games isn't out of the question.

Where to buy NBA jerseys