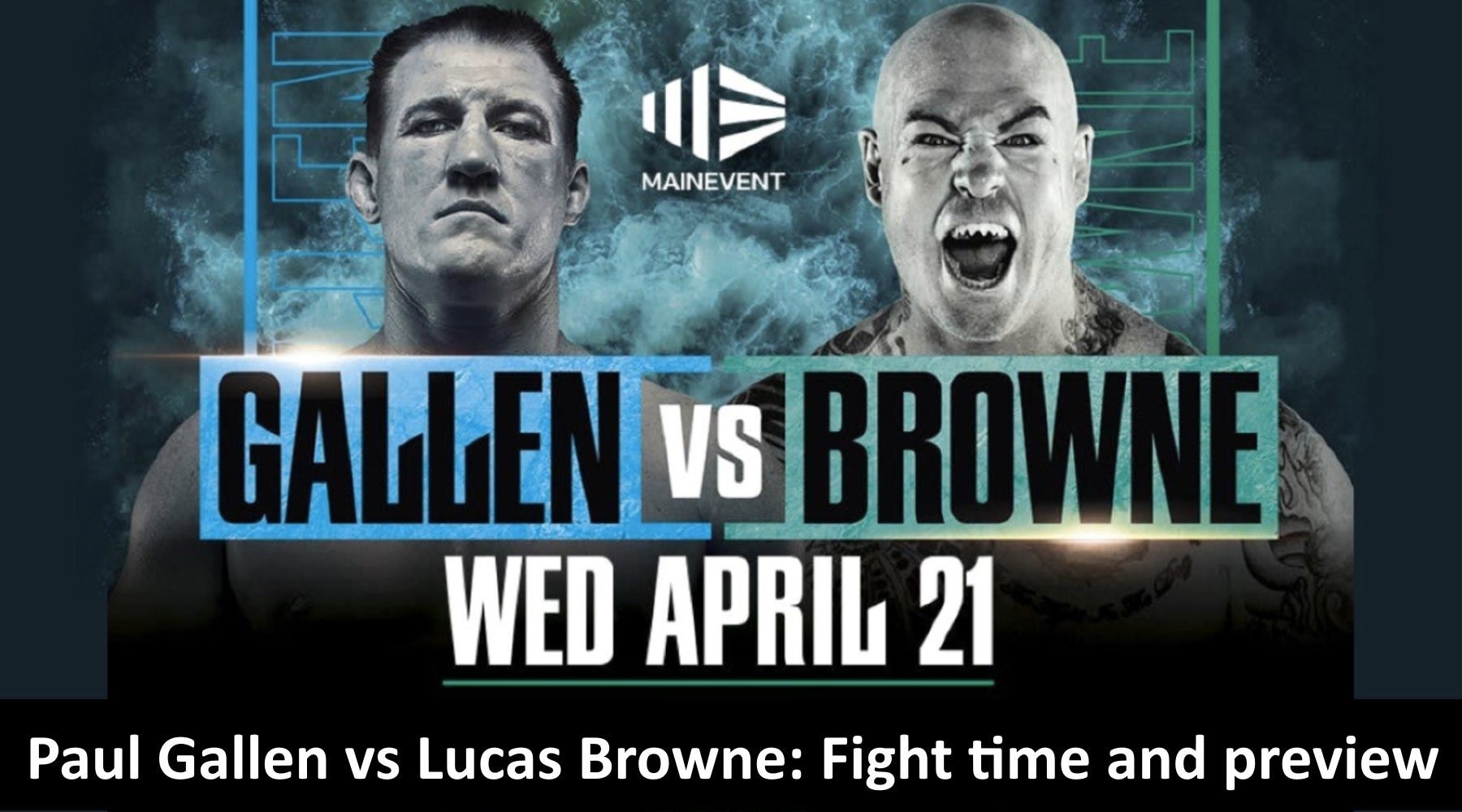 If there are as many punches landed as there have been sledges, Paul Gallen vs Lucas Browne is sure to be a slobberknocker.

SUMMARY: Paul Gallen vs Lucas Browne is live and exclusive to Main Event. The most accessible way to stream the fight live is through Main Event via Kayo Sports. That will also give you access to all its unique features and 50 additional live sports.

Paul Gallen is happy to admit Lucas Browne will be the toughest test of his boxing career. Browne is a former world heavyweight champion and has Gallen covered in terms of experience, reach and height advantage.

"I can combat that (height disadvantage) and get around it," the 39-year-old Gallen told Fox Sports. We're not so sure about that.

Gallen vs Browne is a six-round fight. Capped to go a maximum of 18 minutes, there won't be any tip-toeing around from the combatants.

When does Paul Gallen vs Lucas Browne start?

The undercard at WIN Entertainment Centre in Wollongong starts at 6pm AEST on Wednesday 21 April. Gallen vs Browne isn't expected to get underway until around 10pm AEST.

How to watch Paul Gallen vs Lucas Browne live

Main Event is the exclusive broadcaster of Gallen vs Browne. In Australia that leaves you with two options. Ordering the PPV via Foxtel or watching Main Event through Kayo Sports.

Both options will set you back $59.95, but ordering via Foxtel will only work for existing customers.

To access the PPV on Kayo simply head to this mainevent.kayosports.com.au. You'll need to enter your name, email address, phone number and payment details.

It doesn't matter whether you're an existing, new or returning Kayo Sports customer. You aren't required to have an account to order Gallen vs Browne.

Once you purchase the PPV for $59.95 you'll be given 7 days of free access to Kayo. That means you get a free week to watch this weekend's NRL or AFL big Anzac Day matches. You can also find a replay of Paul Gallen vs John Hopoate.

You can also stream Gallen vs Browne up until midnight on 25 April. All the information you need for this innovative option for watching top-class boxing can be found in this Main Event on Kayo guide.

The traditional way of accessing Main Event on Foxtel is your other option. However, if you're not already a Foxtel customer you can simply forget it and instead watch on Kayo.

Foxtel requires a technician to come and install it at your home, which isn't possible within hours of the fight.

Foxtel customers can order it directly on the Main Event website, by using the My Foxtel app, via your remote control or by phone. The fight also costs $59.95 on Foxtel.

Fox Sports has been plugging this fight for weeks and we can't get enough of "Big Daddy" Browne's message to the undefeated Gallen: "I just want to punch him in the nose," the 42-year-old says.

Browne clearly doesn't rate former Cronulla skipper Gallen, saying he's a footballer, not a boxer. It's great stuff but only the tip of the iceberg.

But Gallen returned serve two days before the fight with this cutting remark to Browne at a press conference: "For a bloke who's six-foot-five and covered in tattoos you're such a pussy." And that was one of the more cleaner remarks. Browne's response? "He's an absolute deadset donkey. He's just got a head that you want to punch."

Let's look past the trash talk for a minute and examine the record of these fighters. Gallen has won 10 fights (5 via knockout), with his only draw coming against former AFL champion Barry Hall in November 2019. Gallen can certainly take a punch and fitness won't be an issue. 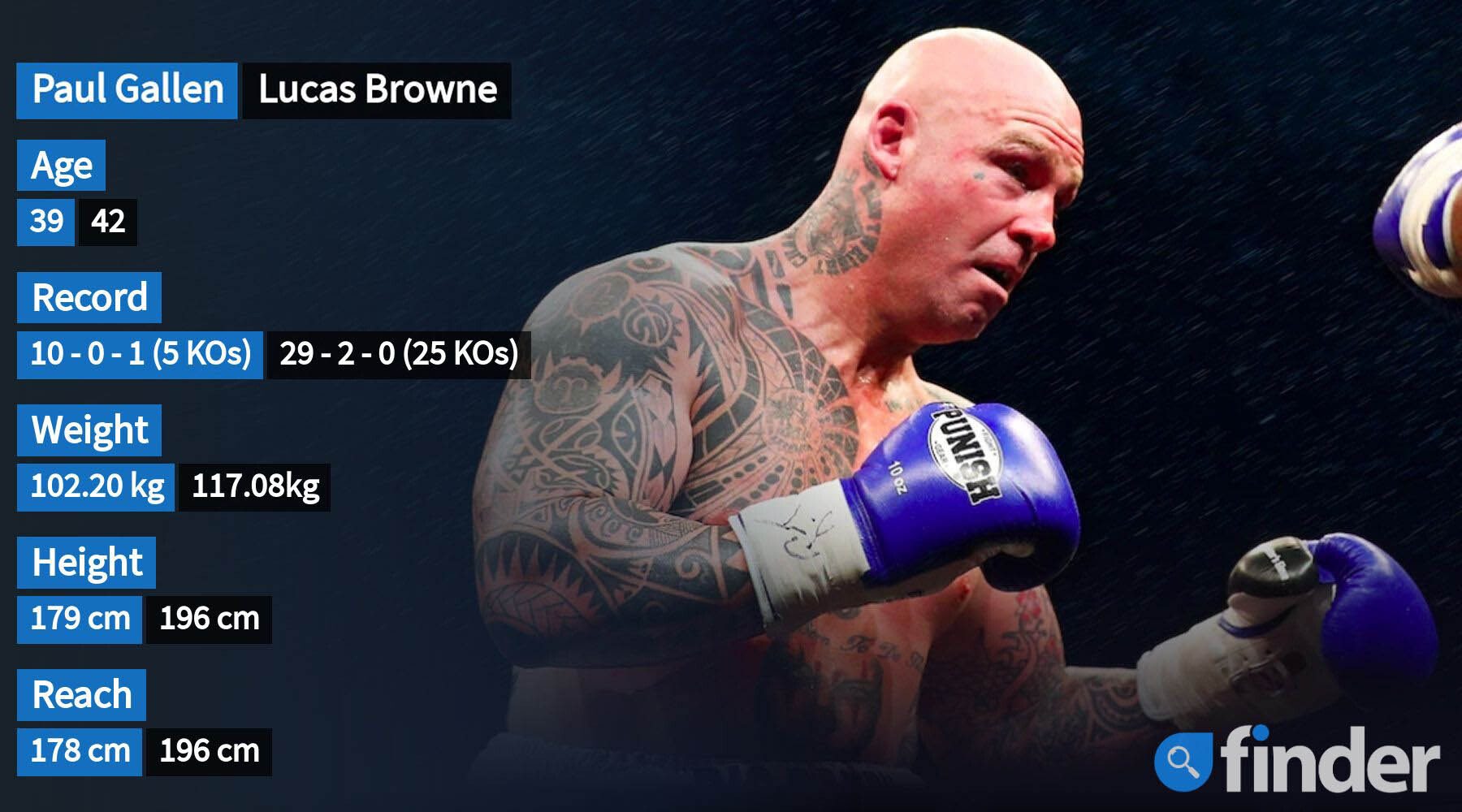 The 196cm Browne held the WBA (Regular) heavyweight title in 2016 when he defeated Russian Ruslan Chagaev to become the first heavyweight champion from Australia. But just two months later Browne was stripped of his world title after failing a drugs test.

In November 2016 it emerged the father of three had tested positive to the muscle strengthening substance Ostarine. He made his comeback in June 2017 when he beat journeyman Mathew Greer in Sydney.

Browne has won 29 out of his 31 pro fights. However, his career has suffered a setback with knockout defeats against British pair Dillian Whyte and David Allen.

But Browne poses a far more formidable threat than Gallen's other fights over the past two years in Hall, an overweight Mark Hunt and former NRL bad boy John Hopoate. We'll tip Browne in a unanimous points decision.