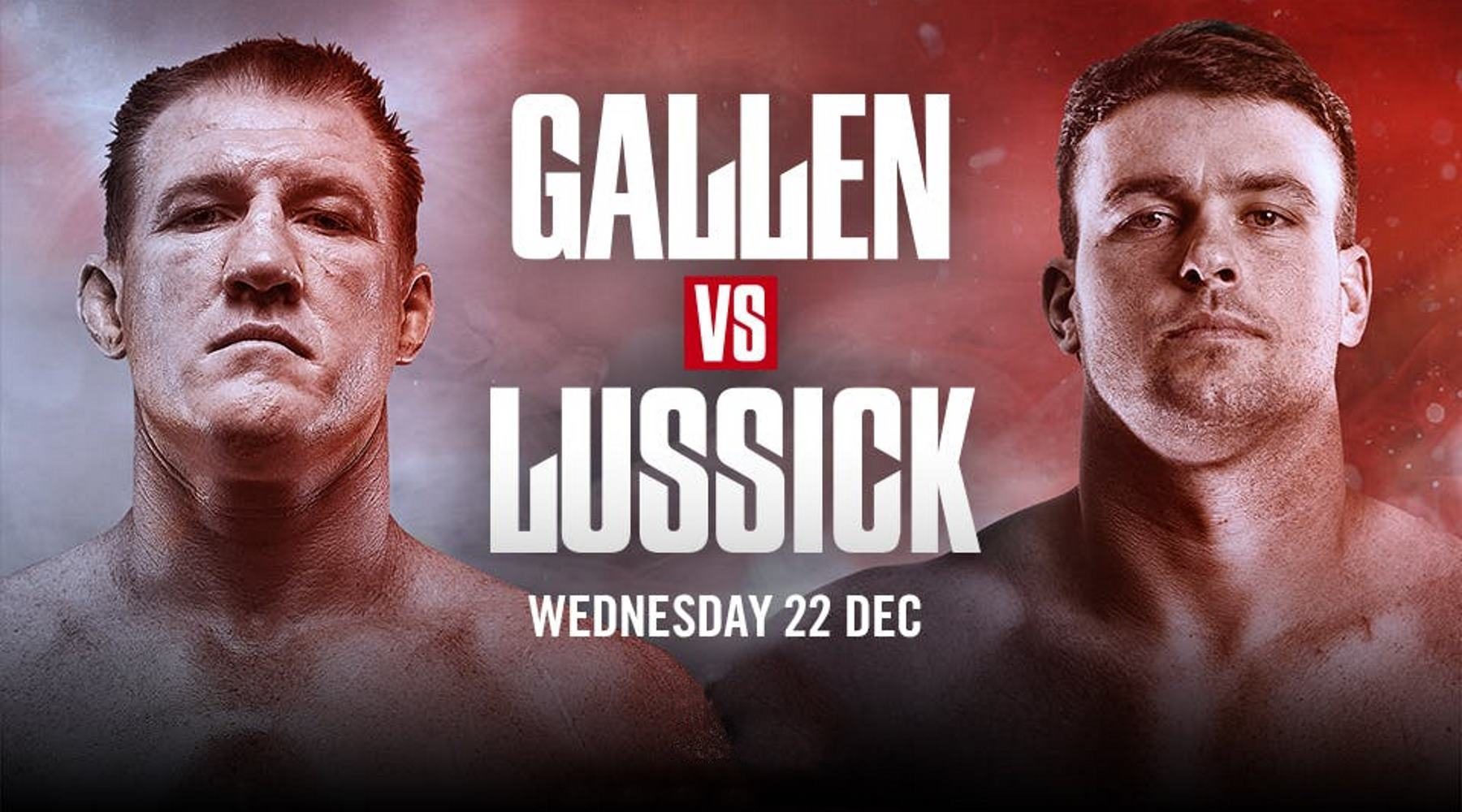 Paul Gallen steps into the ring for the first time since his June loss to Justis Huni to face another much bigger opponent, Darcy Lussick.

SUMMARY: Gallen vs Lussick is live and exclusive to Main Event. The most accessible way to stream the fight live is through Main Event via Kayo Sports. That will also give you access to all its unique features and 50 additional live sports.

For the fourth time in his boxing career, former NRL star turned boxer Paul Gallen is facing a giant. Comparatively, at least. The 180cm former Cronulla captain is taking on Darcy Lussick, who stands 193cm and is also a former rugby league player.

Gallen has had a mixed bag against the big guys in his fight career so far. He lost his last fight to Justis Huni (193cm), scored a lopsided win against Lucas Browne (196cm) and had a draw against former AFL player Barry Hall (194cm).

Lussick played more than 100 NRL games with Manly and Parramatta before continuing his career overseas before turning to boxing. He has had only 1 official fight so far. That came in December 2019 and lasted 39 seconds after Lussick knocked out Justin Hodges, another former NRL player.

There is also interest building in another fight on the card, with more ex-NRL players Chris Heighington and Joey Leilua squaring off in the ring, while Hodges is also scheduled to fight.

When does Gallen vs Lussick start?

Gallen (11-1-1, 6 KOs) and Lussick meet at The Star Event Centre in Sydney on Wednesday 22 December. The action begins at 6pm AEDT.

How to watch Gallen vs Lussick live in Australia

This big night of Aussie boxing is available on pay-per-view through Foxtel's Main Event. You can watch via Foxtel or stream Main Event through Kayo Sports. Both options will set you back $59.95.

Main Event can now be accessed via Kayo Sports. You don't have to be an existing Kayo Sports customer, this option is open to new, returning or existing subscribers.

Sign up online for $59.95 using this Main Event on Kayo Sports link and you can begin streaming as soon as the event gets underway. On top of that you'll be granted access to Kayo until 11:59pm AEDT on 26 December.

That allows you to stream any of the 50 sports on Kayo including UFC, NBA or boxing content like Chasing Tyson from the ESPN 30 for 30 series.

Watch Gallen vs Lussick on Main Event via Foxtel

Gallen vs Hunt on Main Event can be accessed a variety of ways. Foxtel customers can order the fight directly on the Main Event website, using the My Foxtel app, via your remote control or by phone. The fight costs $59.95.

Customers with Optus TV featuring Foxtel can also order this heayweight showdown, but only over the phone. Ordering with a phone agent will incur an additional $2 booking fee.

When is Chris Heighington vs Joey Leilua?

While there has been some spice in the build-up to Gallen vs Lussick, this match-up of ex-league players has also generated plenty of heat. Leilua promised "to take (Heighington's) head off his shoulders" in the pre-fight press conference. Good stuff. This is the third to last fight on the night so will start around 9:30pm AEDT.

Harry Garside, who earned plenty of fans when he won a bronze medal for Australia at the Tokyo Olympics, is also making his professional debut in the penultimate fight of the night.

Who will win Gallen vs Lussick? 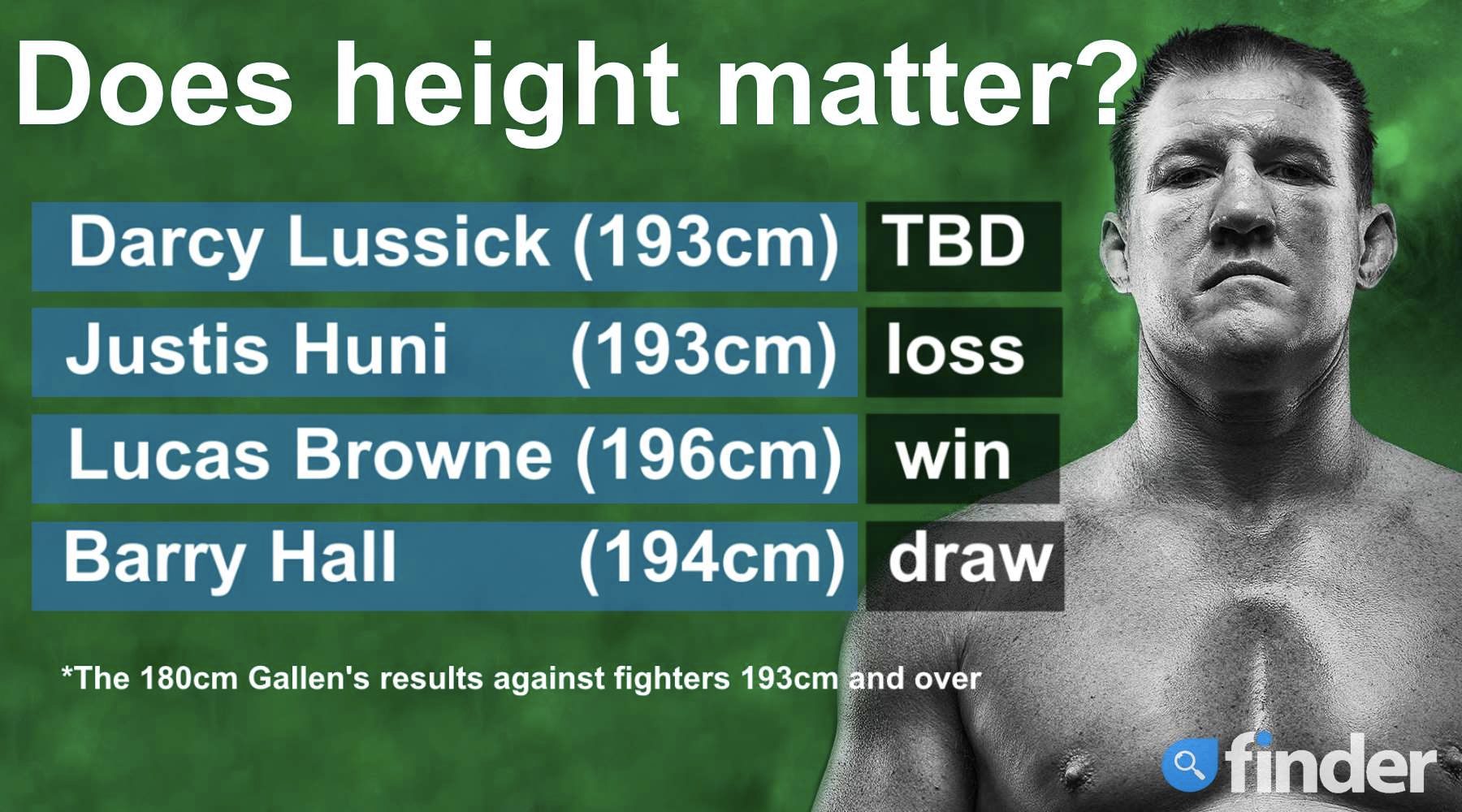 "I'm going to smash you." Those are the words Gallen said to Lussick in the pre-fight press conference. And the premiership skipper should expect to easily account for his opponent, who has stepped into the fight at late notice after the withdrawal of Josh Aloiai, who contracted COVID.

The fight is scheduled for just 3 x 2 minute rounds, something Gallen says he is unhappy about. Still, it should leave plenty of time for him to win. Easily.

Making things a little juicier, promoter George Rose has put a $20,000 bonus on the line for the fighter that delivers the best knockout on the night.

You can see a comparison of Kayo vs Foxtel here. Want more information on boxing? Check out our guide on how to stream boxing live online in Australia.