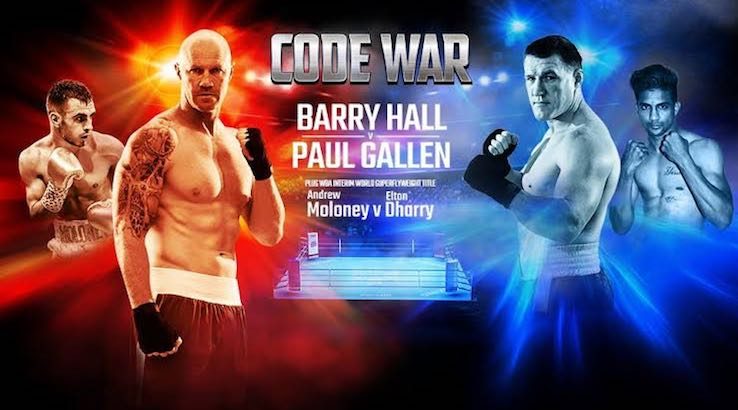 The Code War match is set to be one of the biggest boxing matches in Australian history. Which is something that the greater Australian boxing community I'm sure will cringe over.

That's due to the fact that Hall is making his professional fighting debut and is known from his AFL career. On the other hand, Gallen has at least been between the ropes going undefeated in his nine fights. Though again, he's known for his storied rugby league career.

It's AFL vs NRL, Victoria vs New South Wales – call it what you want, everybody will be watching the fight.

When is Barry Hall vs Paul Gallen?

Hall and Gallen will go toe to toe 15 November at Margaret Court Arena. Main Event has advertised the program to begin at 7:00pm (AEDT). Though don't expect the Gallen vs Hall fight to start until 9:30pm (AEDT) or later.

How to watch Paul Gallen vs Barry Hall

Paul Gallen vs Barry Hall is live and exclusive on pay-per-view (PPV) to Main Event. Gallen vs Hall actually isn't even the main event of the card but rather the co-main event. Elton Dharry and Andrew Moloney will fight for the WBA Interim World Super Flyweight Title.

For Foxtel subscribers, you can order the Paul Gallen vs Barry Hall fight a few ways. The event can be ordered directly on the Main Event website, My Foxtel app, via remote or phone. Customers with Optus TV featuring Foxtel can also order the contest but only by phone.

If you're able to though, avoid ordering with a phone agent as you'll incur a $2 booking fee. The Gallen vs Hall PPV in total will cost $49.95.

Which pubs are showing the Gallen vs Hall fight?

If you aren't keen on forking out for the fight, you're probably in with a chance of finding it at a pub or bar. Below is a list with all the Australian pubs with access to Foxtel and Main Event. Though make sure to ring ahead, as it's no guarantee they will put Gallen vs Hall on.

Who will win Gallen vs Hall?

Finder already has an everything you need to know article for Gallen vs Hall, that includes a fight preview. Gallen will head into the fight as a favourite but may be starting to feel the pressure.

The two have also exchanged a war of words in the lead up to the fight and now seem to genuinely dislike each other.

Gallen has been extremely vocal about Hall only agreeing to fight 6 x 2 minute rounds, rather than the standard 3 minutes. That probably tells you all you need to know about Hall.

Hall has never had a professional boxing fight despite being a teenage state champion. Which would make it all the more embarrassing if Gallen lost to Hall on debut.

As the fight is taking place in Melbourne also expect the crowd to be pro Hall. The Victorian state will also be hoping that the AFL can get bragging rights over the NRL.

Strong rumours have also floated around that if Gallen wins he has a $4 million deal in place to fight Sonny Bill Williams.

You can run your eye over Paul Gallen's last fight against John Hopoate on Kayo Sports. Use a 14-day free trial to see if Gallen looks up to scratch.

A week of festivities reaches its climax with 25 cars taking on the legendary Mount Panorama circuit in the Bathurst 1000.

How to watch UFC Fight Night: Edgar vs Munhoz live and free in Australia

How to watch UFC Fight Night 174: Whittaker vs Till live and free in Australia