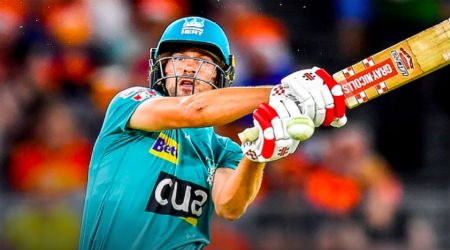 Melbourne Stars vs Brisbane Heat brings a title-chasing team up against another trying desperately to stem the bleeding as the finals loom.

The Stars and the Hurricanes are the only teams yet to claim a Big Bash title. With the Victorians sitting clear atop the ladder with a 10-3 record at the time of writing, they look ready to end that streak. Melbourne Stars vs Brisbane Heat can help shore up that top spot.

When Brisbane (5-7 record) produced a streak of four wins in five games mid-season, they also looked to be right among the title contenders. But they have lost three straight games and are now one point behind Sydney Thunder for the fifth and final play-off spot with two games left.

When is the Melbourne Stars vs Brisbane Heat match?

This match commences at 7:10pm AEDT on Saturday 25 January at the MCG.

How to watch Melbourne Stars vs Brisbane Heat

Channel 7 opted not to show 16 of the 56 fixtures in this year's BBL competition. That includes Stars vs Heat, which is exclusive to Fox Cricket. Channel 7 also can't stream the game on 7Plus. Kayo Sports and Foxtel are the only broadcasters to show every single match of the BBL season live.

Unless you are already a Foxtel iQ or Foxtel Now customer, Kayo Sports is the way to go. This is how you can watch every game of the BBL season live, including Stars vs Heat.

Kayo Sports has access to more than 50 sports. If you are yet to try it, it also offers a 14-day free trial and you can cancel at any time. There are no long-term contracts.

Kayo also has a range of special features, such as SplitView, when you can watch four sports at once. Alternate Camera Angles, including the Flying Fox camera used in the recent Australia vs New Zealand Test series, offers a unique perspective on the action. A Key Moments Timeline and Interactive Stats are also great additions.

Kayo will cost you $25/month for a Basic subscription and that lets you watch on 2 screens or devices. For $10 more per month, you can get a third screen with a Premium subscription.

The streaming platform also has access to every Australian Test and WBBL game. Plus, unlike Channel 7, it broadcasts all of Australia's ODIs and T20Is.

These 2 sides have met on 11 occasions. To date, the Queensland side has firmly held sway, enjoying a 7-4 return. The Stars actually won two of the first three matches against the Heat. But a dominant five-match winning streak then turned the tide in Brisbane's favour.

Who will win Melbourne Stars vs Brisbane Heat?

This may well depend on which Heat team shows up at the MCG. At their best, the talented Brisbane line-up can compete with anyone in the BBL. But they have failed to fire on anything like a consistent basis.

The Stars on the other hand have been a model of consistency. Marcus Stoinis has been superlative with the willow, backed up beautifully by Glenn Maxwell. Haris Rauf has been a pleasant surprise with ball in hand and the Stars' combinations have fired all tournament.

With a first BBL title tantalisingly close, the Melbourne side will be hell-bent on carrying their form into the looming finals series and should be too strong for a desperate Brisbane.