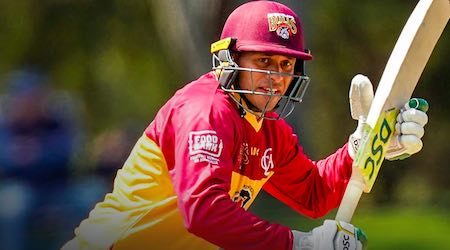 It's Queensland vs WA in the 2019 Marsh One-Day Cup final.

The summer of cricket isn't only about the international scene. Australia's domestic competition also heats up, which is highlighted by the Marsh One-Day Cup final and closely followed by the BBL.

It'll be Queensland vs Western Australia in the final after both sides managed to win five out of seven matches. The pair have met twice already in the competition, managing a win each.

Dropped from the Test side, Usman Khawaja has been in great form with the willow for Queensland in the Marsh One-Day Cup. During the tournament, Khawaja has led the way with the bat averaging 93.00. In his last innings he finished up 86*.

Fellow ex-Australia squad members Shaun Marsh, Cameron Bancroft and D'Arcy Short have been in good knick with averages all above 33. WA sport a deep batting line-up and can get contributions all the way down to number nine.

When you run your eye down the bowling attacks there are a few well-known names too. The Queensland Bulls are led by paceman Mark Steketee with 11 wickets to his name. The rest of the squadron contains Billy Stanlake, Michael Neser and young spinner Matthew Kuhnemann.

Michael Neser, like Cameron Bancroft, has been released from the Australian Test squad to play in the final.

They're WA's leading wicket takers but it's Coulter-Nile who stands out with the most scalps in the tournament at 14.

When is the Marsh One-Day Cup final?

The first ball of the final in the Marsh One-Day Cup is set to be bowled at 10am AEST (11am AEDT) on 26 November.

Where is the Marsh One-Day Cup final?

Hosting the Marsh One-Day Cup Final is the sunshine state Queensland. Queensland vs Western Australia will be played at Allan Border Field in Brisbane.

The Marsh One-Day Cup final is live and exclusive to the FOX CRICKET channel. In short that means you can only see Queensland vs WA on either Kayo Sports or Foxtel.

With over 50 sports and the entire summer of cricket, true fans should really consider Kayo Sports. Kayo has every Australian international including the ODIs and T20Is that aren't on free-to-air, plus all of the BBL and WBBL.

You can start watching on Kayo for free thanks to a 14-day free trial. After that you can continue on with a subscription from either $25 or $35 monthly. The only way the two subscriptions differ is that the more expensive option lets you watch from three devices simultaneously.

Where Kayo really separates itself is with its special viewing features. SplitView lets you watch up to four sports on the same screen at once, plus there's Interactive Stats to give you an insight into the game.

There's a Key Moments timeline too, so you can easily skip ahead to the best bits and more. As the Marsh One Day-Cup final is on while most people are at work, you can make use of the discrete pop-out window so you can still watch live.

Just last week Kayo received international recognition when it won an award for the best user experience at the SportsPro awards in Spain. You can watch Kayo Sports on iOS and Android devices, Mac and PC, Apple TV, Telstra TV, Android TV and Chromecast. If you're still after more information see our full Kayo Sports review.

Existing Foxtel customers are able to add the Sports HD channel pack on for $25/month. Given the short turnaround here, if you're a new customer you'll likely be unable to get Foxtel iQ installed in time.

You could subscribe and get immediate access to Foxtel GO, which comes standard as part of your subscription. This would allow you to stream to iOS or Android devices or through a supported web browser.

If you were to still consider this as an option the price comes to $74/month for sports content. That's because you must have the new base Foxtel Plus package which is $49/month.

Typically there are Foxtel IQ deals available so you may be able to get a cheaper bundle. You'll also be eligible for the Foxtel First customer loyalty program.

Foxtel Now is another way to watch Foxtel but it's exclusively a streaming service. Again existing customers can contact Foxtel and simply add the Sport pack to their existing subscription for $29/month.

Once more, new customers are troubled by the mandatory base Essentials pack costing $25/month. So at minimum you'll have a monthly bill totalling $54/month. So while it's cheaper than the iQ options it's still far more expensive than Kayo Sports.

One positive is the range of devices Foxtel Now is compatible with. It's able to be watched via the Foxtel Now box, iOS and Android devices, Android TV, Telstra TV, Playstation 4, Chromecast, Airplay, PC and Mac.

Yet again you'll also have access to watch from the Foxtel GO app. New customers are also offered a 10-day free trial.