NBA superstars Steph Curry and LeBron James face off as the Warriors and Lakers try to seal a spot in the Western Conference playoffs.

SUMMARY: Lakers vs Warriors is on ESPN. Unless you're already a Foxtel or Fetch customer, your best option is to watch live on Kayo Sports. You can watch for free using this 14-day trial.

Lakers vs Warriors is a dream match-up for all basketball fans. The Warriors, led by Steph Curry, held off Memphis on Monday to wrap up the number eight seed and book a clash against four-time NBA champion LeBron James and his Lakers.

The Lakers finished in seventh spot in the Western Conference. Decimated by injuries to key players, the defending champions fell dramatically after sitting top of the table in January. Both James and All-Star teammate Anthony Davis missed extended periods that severely impacted their regular season.

When is Lakers vs Warriors?

Tip-off between LA and Golden State is scheduled for 12pm AEST on Thursday 20 May at the Staples Center, Los Angeles.

How to watch Lakers vs Warriors live in Australia

ESPN and NBA League Pass are your options for LeBron vs Steph. ESPN can be accessed via Foxtel, Kayo Sports, Foxtel Now or Fetch TV. For a further breakdown check out our how to stream NBA guide.

Kayo Sports is a great option for a wide variety of sports and its list of special features. It also has a 14-day free trial for new users so you can take it all for a spin. After that, you can subscribe to Kayo for either $25 a month (2 screens) or $35 a month (3 screens).

Kayo doesn't have access to every single game of the playoffs. But it has all the play-in, Conference Finals and NBA Finals matches, along with some of the first and second round.

All up Kayo offers more than 50 sports for you to choose from, including the NFL, MLB and NHL. Closer to home it has every single game of the NRL and AFL seasons live and ad-free.

The platform is compatible with PC, Mac, iOS and Android devices, Chromecast, Apple TV, Android TV, Telstra TV, Sony Bravia TV and Samsung smart TVs (2017 models or later). If you're stuck working today you can utilise the pop out window feature to discreetly watch Lakers vs Warriors in the corner of your screen.

For more information check out our extensive Kayo review.

The NBA also has its own streaming service, NBA League Pass. It's the only way you can stream every single game from the NBA season live in Australia. Unlike ESPN, NBA League Pass has every playoff game live.

There are usually a range of subscription options, but right now there is only one pass for $39 a month. It also has a seven-day free trial for new users. 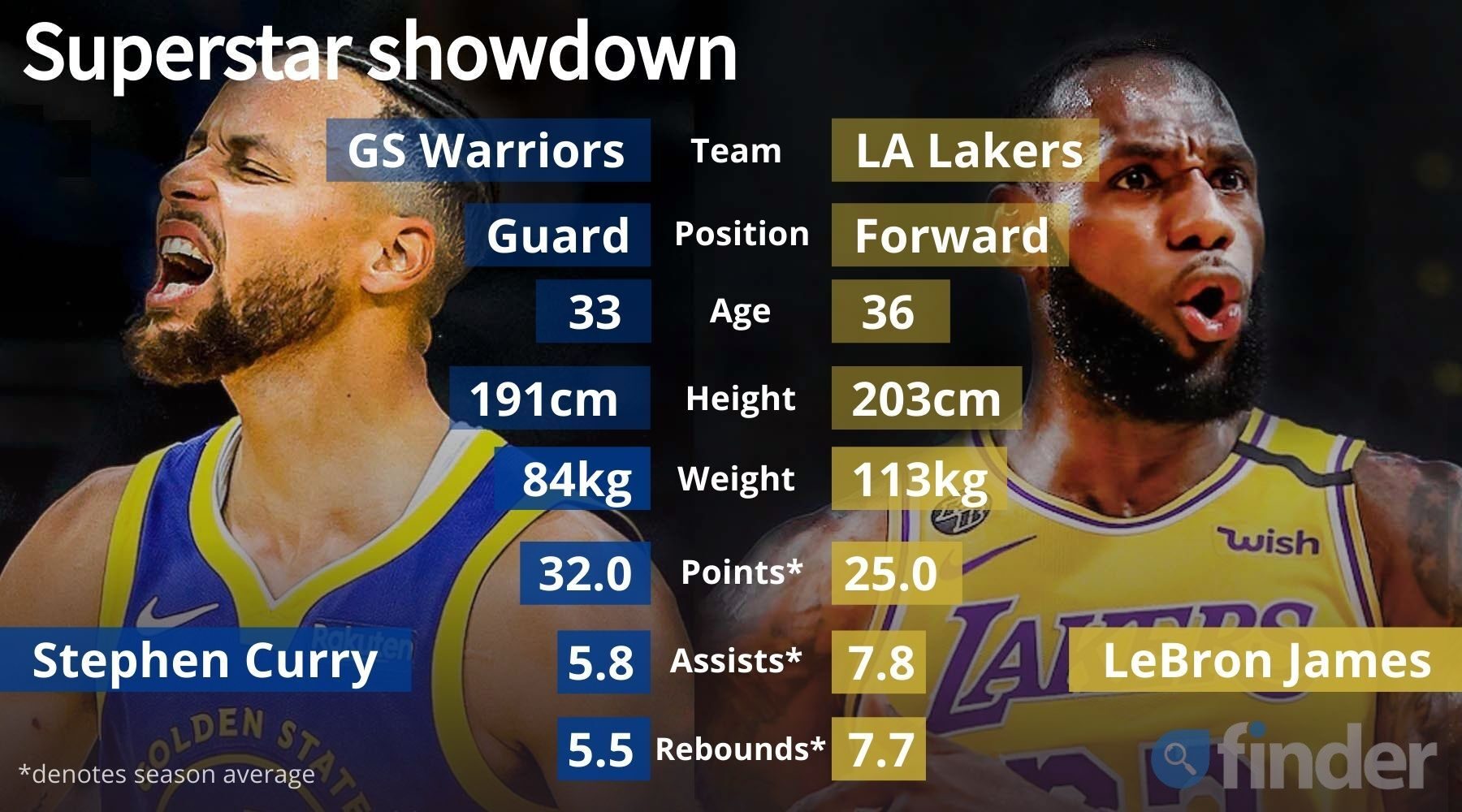 Steph vs LeBron. That's all we need to say to sell this blockbuster, which has worldwide ratings gold written all over it. The Lakers are hot favourites but with Curry energising the Warriors, anything is possible.

Curry, 33, became the oldest scoring champion since Michael Jordan in 1998, finishing with 46 points against the Grizzlies.

Bear in mind too that King James has been struggling with an ankle injury, although even a half-fit LeBron is a scary proposition for rivals. Davis was kept quiet in the season finale, scoring just 14 points in the Lakers' 110-98 victory over New Orleans. Davis entered the contest having averaged 31.5 points and 10 boards over his previous 4 games in an injury-plagued season. He played in only 36 of his team's 72 matches.

The last time these teams met the Lakers thrashed Golden State 128-97 when Davis and Marc Gasol were sidelined. But the Lakers will fear the Warriors, with Curry arguably having the season of his life. James has openly admitted Curry deserves the MVP award. The Warriors are coming off back-to-back wins against Utah and Phoenix but we think the Lakers will be too strong in a close one.

Following a model that was adopted during last year's coronavirus-impacted season, four teams in each conference compete for the final two spots available in the full post-season.

The winner of the single game between the Lakers and Warriors will be the number seven seed and face number two seed Phoenix in the opening round of the Western Conference playoffs.

The loser will meet the winner of Spurs vs Memphis in a single elimination game for the eighth seed. That team will then take on Joe Ingles' Utah Jazz, the top overall seed in the West.

You can see a comparison of Kayo vs Foxtel here. If you love your US sport, we also have a guide to watching the current NHL playoffs.