How to watch UFC 239 Jon Jones vs. Thiago Santos in Australia 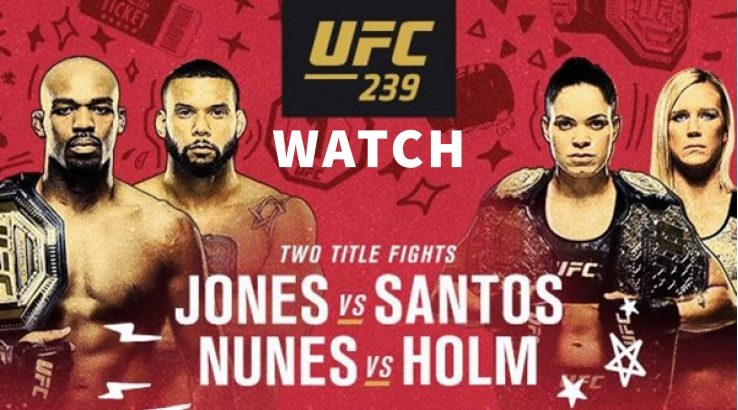 UFC 239 is set to be one of the biggest events in MMA history with two headline events. Here's how you can live stream Jones vs Santos, Nunes vs Holm and the whole UFC 239 card.

It doesn't get any bigger than UFC 239. In what's become a packed 2019 UFC schedule, this event stands out for two big reasons. Arguably the best male UFC fighter of all-time, Jon Jones, and the best women's UFC fighter of all time, Amanda Nunes, are both putting their belts on the line in UFC 239.

If that's not enough to get you excited, there's a further 10 battles unfolding, for a total of 12 bouts - a feast of fists for fighting fans. Here is everything you need to know about UFC 239, including how you can live stream Jones vs Santos, and live stream Nunes vs Holm.

Who will win Jones vs Santos UFC 239 Live

A controversial figure, Jon Jones has two drug related bans under his belt, but he does indeed have a belt to put them under. The current UFC Light Heavyweight champion, Jones' record of 24 wins from 26 fights is impossible to argue with. The American is proficient in Gaidojutsu and Jiu-Jitsu, with a near even split of victories by knockout, submission and decision. At 193cm, he's a big man and goes into the fight a favourite.

Brazilian Thiago Santos may stand shorter at 1.88, but with 27 fights (21 wins) he's not short on experience. A Muay Thai specialist, it should be no surprise he has 15 wins by knockout. But Santos is also well-versed in Jiu-Jitsu, which ensures he has multiple weapons at his disposal. As the number two ranked fighter in the division, he is every chance of a victory in what should be a tight contest.

Who will win Nunes vs Holm UFC 239 Live

Amanda Nunes is a legend already at 31. The first women to ever hold two belts simultaneously as Bantamweight and Featherweight champion, she is also considered the sixth best fighter on the planet pound-for-pound. Proficient in Boxing, Brazilian Jiu-Jitsu, Judo and Capoeira, she is known for her power. Of the 17 wins she has notched up in 21 fights, 12 have been from knockouts. Nunes, a Brazilian, will be hard to beat.

American Holly Holm is no walkover, however. This is the fighter who gave Ronda Rousey her first ever loss, claiming the Bantamweight title in the process. Her specialties lie in boxing, kickboxing and Gaidojutsu, bringing a different style to the table than Nunes. With 16 fights to her name, including 12 victories, she is not light on experience, especially when you add on top of that 60 professional boxing and kickboxing bouts. Can Holm take the Bantamweight title off Nunes?

Below you will find the estimated start times for each of the fights on the UFC 239 card for July 7. Of course, you never know how long each individual fight will go for, so there is a chance that these times may shift slightly. With that in mind, give yourself plenty of padding before turning on the TV. Look for a comparison of the various broadcast options after the table.

If you're not familiar with the way the major UFC fight nights work, it's a little bit convoluted. The only way to what the preliminary bouts and the Jones vs Santos / Nunes vs Holm Main Card is through the pay-per-view services we'll detail in the next section. However, the Undercard (see the UFC 239 schedule of fights above), is also broadcast on EPSN.

You can access ESPN through three methods in Australia; Kayo Sports, Foxtel and Fetch.

The most exciting disruptor to the Australian live sports landscape in three decades is Kayo Sports. This service broadcasts all the content from the Fox Sports 1-8, beIN Sports 1-3, ESPN 1-2 and Racing.com channels – which works out to over 50 sports live and on demand – through its own standalone service. And it does so for substantially less than the competition, at $25/month.

The good news is you can try it out with UFC 239 for free, thanks to the 14-day trial . Kayo Sports works on iOS and Android mobiles and tablets, PCs, Macs, and TVs via ChromeCast, Apple TV, Android TV and Telstra TV.

You can also look to the more traditional Foxtel services. On Foxtel IQ, adding the premium Sports pack to your package for the month ($29/month + $10/month for HD) will grant you access to ESPN. You can then also stream UFC 239 to your mobile or tablet with the Foxtel Go app. The minimum cost for the month is $68.

Alternatively, there is Foxtel Now. This offers similar sports content to Kayo Sports, without featuring any of the unique viewing modes or the great user interface. The benefit is that getting the Sports Pack for Foxtel Now also comes with the Essentials Pack. This includes non-sport content such as HBO (Game of Thrones, Walking Dead, Westworld), Selling Houses Australia and Fox 8.

The ESPN channels are also available through Fetch. For an additional $6/month you can add the Vibe Pack to your existing subscription. This will give you access to ESPN and therefore the Undercard for UFC 239. The overall cost of this option, however, is determined by the package you originally signed-up for to access Fetch in the first place.

You can only watch the Undercard through ESPN as detailed above, but you can watch the entire card – the Preliminaries, Undercard and Main Card – through pay-per-view. There is no way around this if you want to watch Jones vs Santos and Nunes vs Holm on your own terms. There are three ways of accessing UFC 239 on pay-per-view: Main Event, UFC Fight Pass and PlayStation 4.

How to watch UFC 239 on Main Event

The most common solution for most people looking to watch UFC Main Event programming at home is to order it through an existing Foxtel IQ or Foxtel Now subscription. You can do this direct through the user interface, through the myfoxtel app, by phone or on the Main Event website. Just look for the Jones vs Santos, Nunes vs Holm visuals if you get lost.

How to watch UFC 239 on UFC Fight Pass

Naturally, there is the official UFC website and UFC app, Fight Pass that can solve your live stream UFC 239 needs. It costs $60.49 for SD, or $71.49 for an HD live stream of the one day event, although you can dodge this if you are a new customer through the 7-day free trial. UFC Fight Pass is geared for long-term subscribers, as it only costs $25 more to get a six-month HD subscription at $98.46.

The UFC Fight Pass works on Amazon Fire TV, Apple TV, Android, iOS, LG Smart TVs, Samsung Smart TVs and Xbox One. Or you can live steam UFC 239 through the UFC website in your browser.

How to watch UFC 239 on PlayStation 4

It is possible to watch a UFC 239 live stream through a PS4 video games console. Find it under Live Events in the PlayStation Store. A single UFC event costs $71.49 on PS4, but if you're a PlayStation Plus member you get a 10% discount, bringing it down to $64.34. However, you can only watch the Main Card – which is the final five fights – on a PS4. Look for it in the My Events app once purchased.

Which pubs are showing the Jones vs Santos and Nunes vs Holm fight?

If none of the above options suit your needs, you can also look to watch UFC 239 unfold at your local watering hole. If a pub or RSL has Foxtel, which most who show sport will, then they have the power to order a Main Event and showcase it in the venue. It doesn't mean they will, however. So, while the below list shows all the pubs with the capability of showing UFC 239, you should ring ahead before arrival to be sure.