SUMMARY: Titans vs Warriors is exclusive to Fox Sports. That means your best option is to watch live on Kayo, unless you're already a Foxtel customer. You can watch for free using this 14-day trial.

A win of 11 or more points against the Warriors will see the Titans steal the final top 8 spot. A Raiders loss to the Roosters, followed by a Sharks loss to the Storm has left the Titans with their fate in their own hands.

It's astonishing the Titans are even in with a chance of still making the top 8. The Gold Coast comes into the game on the back of 3 straight losses, and although the Titans are favourites, they're on a bigger losing streak than the Warriors.

The Titans and Warriors kick off at 2:00pm AEST Sunday 5 September from Cbus Super Stadium.

How to watch Titans vs Warriors live

As mentioned above, the Titans and Warriors fixture is exclusive to the Fox League channel, so you've got 3 options to pick from: Kayo Sports, Foxtel iQ or Foxtel Now. However, given that this match is on today, your only 2 realistic options are Foxtel Now or Kayo, as they don't require installation by a third party.

Of the 2, Kayo is superior due to it being a dedicated sports streaming service. You can see an in depth breakdown in our Kayo vs Foxtel article. It's also worth noting that this game isn't on Kayo Freebies.

Take Kayo Sports' Basic or Premium plan for a spin and stream over 50 sports live and completely free for 14 days.

Stream Titans vs Warriors on Kayo

This is the last NRL fixture that won't be on free-to-air for the rest of the season. Kayo is your easiest way around that. You can simply make use of the 14-day free trial, watch the Titans and Warriors, then cancel.

But we would recommend making the most of your 2 weeks trial. Right now, you could get access to the US Open, UFC, PGA Tour, or F1 Netherlands Grand Prix, all of which aren't on free-to-air. Over the next month, it will also have the NFL, IPL and Carabao Cup. There are over 50 sports in total, you can see the full list of those on Kayo here.

After the free trial, it will cost you $25 per month. Or if you'd like to watch on 3 devices at once instead of 2, you can pay $35 monthly. There's also a handful of viewing features on Kayo that you won't find anywhere else. You can check it all out in our Kayo Sports review.

It's a simple equation win by 11 or more, and the Gold Coast will guarantee their first finals berth since 2016 and a date with the Sydney Roosters. An 11 point win would see the Titans finish on equal points differential with the Sharks. For those wondering how the Titans progress over the Sharks under that scenario, it's to do with percentages. Essentially, as both teams have a negative point differential, it will come down to Gold Coast having scored more points.

No matter the result, the Sharks or Titans will be in the record books as the worst top 8 side in history. No team will have previously made the finals with just a 41.6% winning record, as pointed out by the Sydney Morning Herald. 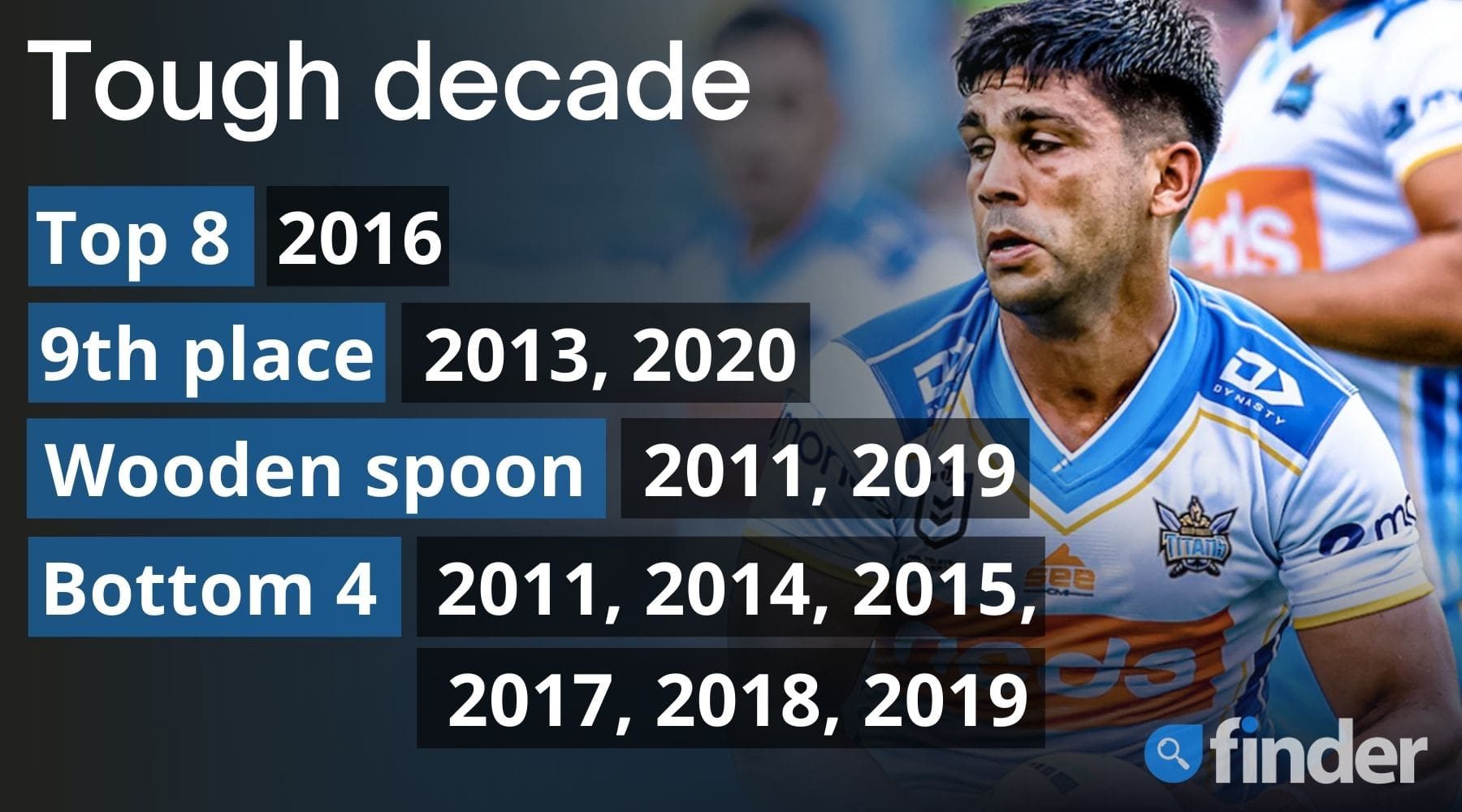 The Titans will need to improve drastically on their performance last week to get through. While they dominated possession and were arguably the better side for the majority of the contest, like most of the season, the Titans lacked the class to execute.

For that reason, it will be interesting to see who Titans coach Justin Holbrook puts in his final 17. Currently Tyrone Peachey and captain Jamal Fogarty are named in the halves. However, 20-year-old rookie half Toby Sexton still remains in the extended squad.

While Sexton has only played 4 games to date so far, he may end up on the bench or in the halves with Peachey dropping to the interchange given his utility value. Sexton could help alleviate the kicking duties and attacking organisation that Fogarty struggled with last week.

Pundits will also be sure to pick apart Holbrook's decision-making with how he uses star forward David Fifita. Through the back half of the season, Fifita has switched between starting and coming off the bench.

Given the importance of the result, it would be a bold move to not start Fifita, who showed how talented he was with a solo try last week when he carried Knights defenders over the line.

For the Warriors, their biggest threat to the Titans on Sunday will be their attack. The Titans have recorded the sixth worst defensive record in the competition and the Warriors play an expansive attacking style.

If the Gold Coast can't contain Warriors youngsters Reece Walsh or Chanel Harris-Tavita early, then no doubt the winning margin will start playing on the Titans' minds.

We're leaning towards the Titans winning, but by how much is tough to predict. We'll opt for the Titans to win by 14 points and secure the required margin with a late try.

For more information on watching the footy, see our How to Watch NRL Guide. If you're looking for more info on Kayo, then check out all of its available features for each sport.