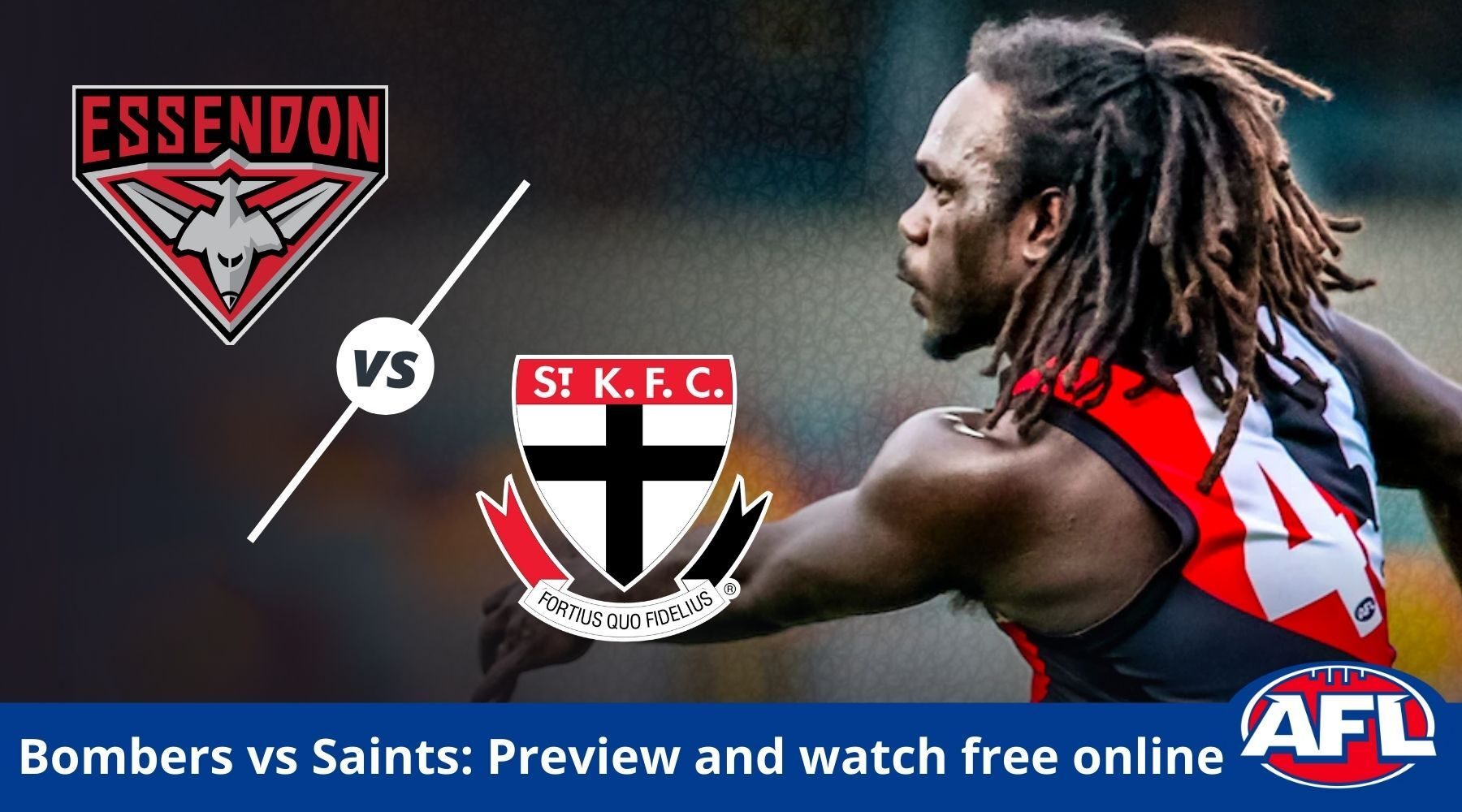 Both the Bombers and Saints are coming off last-start AFL losses, so who wants this one more?

SUMMARY: Bombers vs Saints is exclusive to Fox Footy right across the country. Unless you're already an existing Foxtel customer, your best option is to watch live on Kayo Sports. You can watch for free using this 14-day trial.

Early in the 2021 campaign, the Bombers (0-2 record) are already in disarray. Torn apart by injuries to key players, after taking on the Saints they face a tough run of matches against Sydney, Brisbane and Collingwood.

St Kilda (1-1) are coming off an emotional week in which they honoured late club great Danny "Spud" Frawley. They couldn't draw on that emotion in their loss to Melbourne last weekend and will aim to bounce back against Essendon.

When is Essendon vs St Kilda?

The match begins at 3:45pm AEDT at Marvel Stadium, Melbourne on Saturday 3 April.

How to watch Essendon Bombers vs St Kilda Saints

This match is exclusive to Fox Footy. The only way to tune in – and guarantee yourself access to every regular season game this year – is via Foxtel iQ, Foxtel Now or Kayo Sports. We have a full guide to the AFL season here.

Essendon and St Kilda are among the most renowned clubs in Aussie Rules history. We think the best way to catch their 217th overall meeting is through Kayo Sports. It currently has a 14-day free trial for new users.

After the trial, a Basic subscription is $25 a month and you can watch on two simultaneous screens. There is also a Premium option for $35 a month and a third screen. You can check it all out in our Kayo Sports review.

Kayo also has a range of unique features. You want to watch up to four sports at once on the same screen? Well you can thanks to SplitView on Kayo. There are also Interactive Stats, No Spoilers, Key Moments and more. In total Kayo broadcasts more than 50 sports.

Essendon's history is infinitely more decorated than St Kilda. The Bombers have 16 AFL/VFL premierships, the most all time alongside great rival Carlton. St Kilda remains stuck on just a solitary flag, earned way back in 1966.

The recent history of these clubs makes pretty sorry reading. The Bombers have made the finals twice in the past five seasons, once more than the Saints. But both clubs have become accustomed to losing far more games than they win.

Anyone that follows football could tell you it is the Saints with the brighter future under coach Brett Ratten. They impressed all with their sixth-placed finish last year. They then overcame the Western Bulldogs in their elimination final before succumbing to eventual premiers Richmond.

The Bombers, meanwhile, are still recovering from the supplements scandal that engulfed the club in 2016. With injury problems and a lack of depth, it could be some time yet until they are in position to challenge for a 17th flag. Who will win Essendon vs St Kilda?

The Saints should win this comfortably. The Bombers will be missing key trio Sam Draper (ankle), Dylan Shiel (knee) and Jye Caldwell (hamstring) for an extended period. Skipper Dyson Heppell (back) has been named in the team but is no certainty to return this week.

Saints wingman Brad Hill will be looking to make amends after a shocker in his side's loss to Melbourne. Coach Brett Ratten told AFL 360 this week that "skill errors" are hurting his team. If the Saints can find their targets better, they could rack up a cricket score.