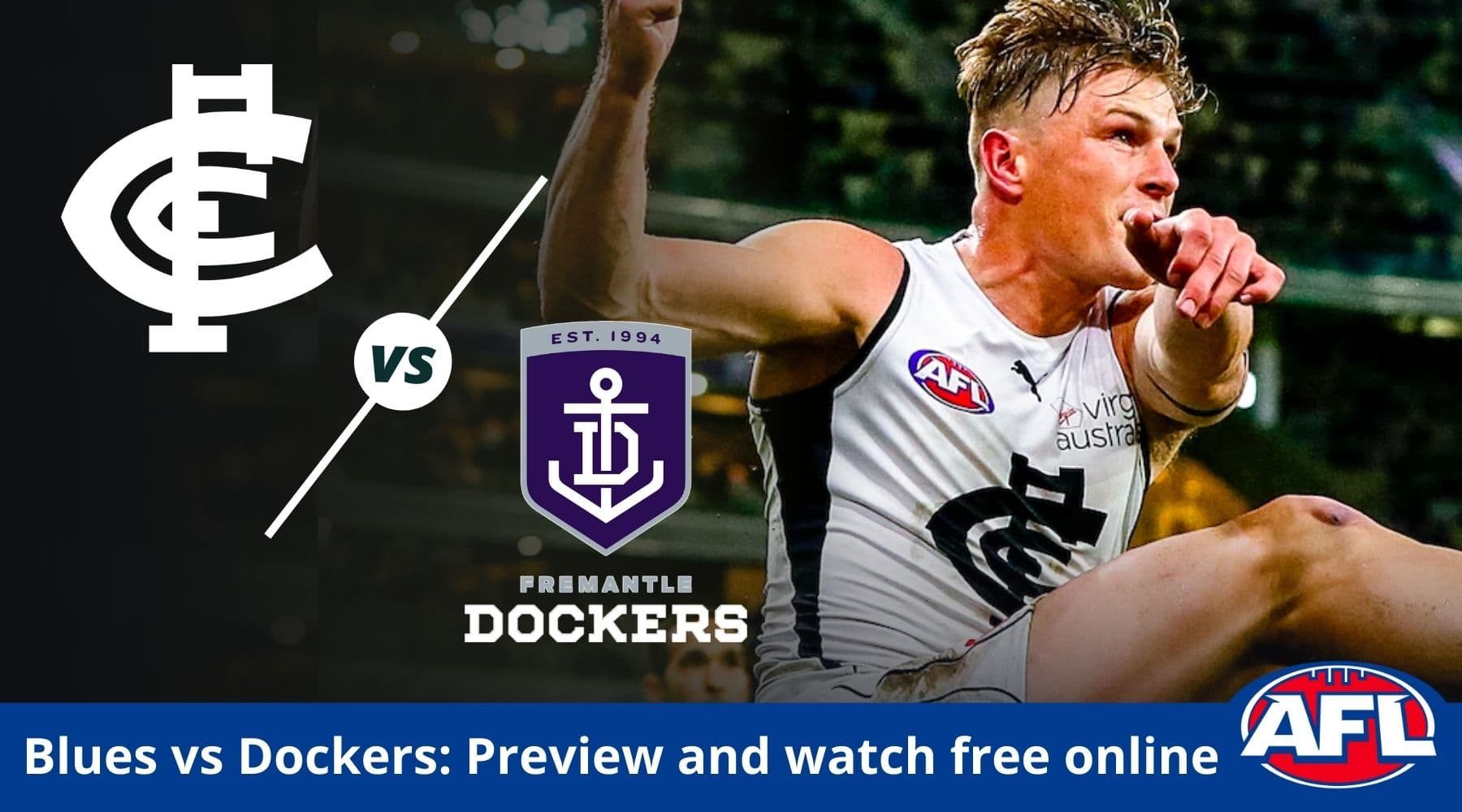 Missing their skipper Nat Fyfe, can the Dockers keep the Blues winless this AFL season?

SUMMARY: Blues vs Dockers is on 7mate in WA. Everywhere else in the country it's on Fox Footy. So unless you're already an existing Foxtel customer, your best option is to watch live on Kayo Sports. You can watch for free using this 14-day trial.

Carlton face a serious challenge to stay in the finals hunt after two losses to start the year. Skipper Patrick Cripps' struggles reflect the battling Blues, although the club says he has benefited from an extended break and expect him to fire this week.

The Dockers are relying on the speed and energy of their young guns and sit in eighth spot with a 1-1 return. If they can jag a victory here, they face winnable games against Hawthorn, Adelaide and the Kangaroos.

When is Carlton Blues vs Fremantle Dockers?

The opening bounce is at 3:20pm AEST at Marvel Stadium, Melbourne on Sunday 4 April.

How to watch Carlton vs Fremantle

Channel 7 and Foxtel have the rights to broadcast AFL matches in Australia and it varies from state to state. This game is on free-to-air TV in Western Australia. If you live anywhere else in the country, you will need a subscription service.

Fox Footy is the only way to guarantee you have access to every AFL game in 2021. Foxtel iQ, Foxtel Now and Kayo Sports are your options for this clash outside WA. There is also Watch AFL if you are overseas. We have a full guide to the AFL season here.

For Blues fans outside Western Australia who want to see if their side can get its season going, we suggest you take a look at Kayo Sports. Kayo is offering a 14-day free trial for new users.

After the trial period, a Basic subscription is $25 a month and you can watch on two simultaneous screens. There is also a Premium option for $35 a month and a third screen. You can check it all out in our Kayo Sports review.

Kayo also has a range of unique features for you. SplitView lets you watch up to four sports at once on the same screen. There are also Interactive Stats, No Spoilers, Key Moments and more. In total Kayo broadcasts more than 50 sports.

Blues vs Dockers tats that matter

It has been slim pickings for both of these teams over the last five years. As you can see below, the best either side has finished in the 18-team competition in that time is 11th. There isn't a single post-season appearance between them.

While the Blues have been mired in mediocrity or worse for the best part of two decades, the Dockers endured a significant slump. Minor premiers in 2015, when they reached the preliminary finals, Freo haven't tasted the finals series since.

The two clubs are attempting to rebuild with relatively young lists and fledgling coaches. Perhaps we will get a glimpse which club is making greater progress in this match-up on Sunday. 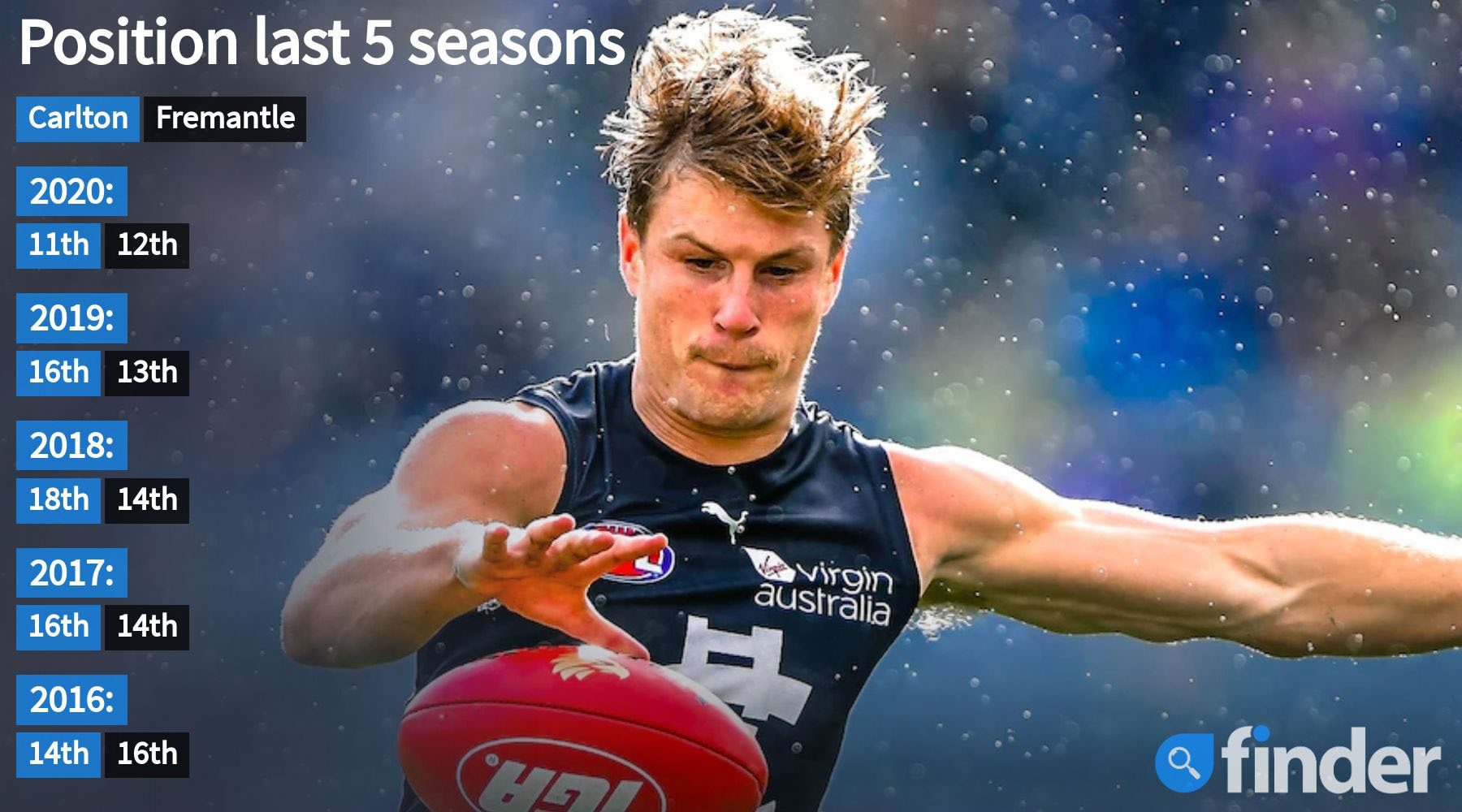 Dockers captain Nat Fyfe is unavailable after suffering concussion from a Sam Reid bump in Freo's victory over GWS. With the dual Brownlow Medallist out, we're tipping the Blues to post their first win of the season at home.

It won't come easy for Carlton if they can't fix their alarming defensive issues. David Teague's men have conceded more than 100 points in losses to Richmond and Collingwood. They also need to improve their ball use, with turnovers a major issue in their last-start defeat against the Magpies.

Carlton's Jack Martin and Zac Fisher are set to miss the next six weeks after suffering knee and ankle injuries last week respectively. Still, we think they can get the four points at home.