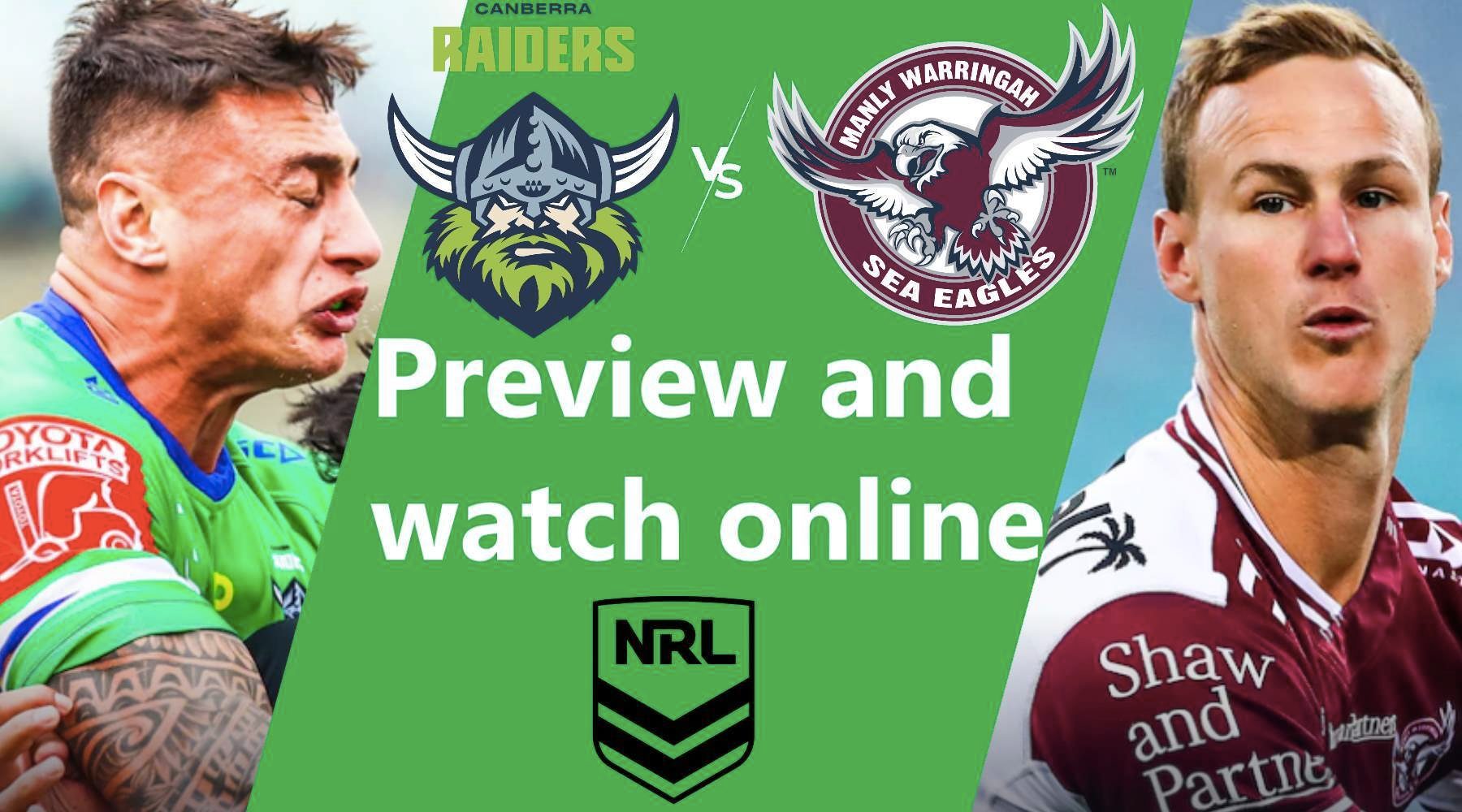 The Canberra Raiders' hopes of a finals berth face a stiff test against the in-form Sea Eagles.

SUMMARY: Raiders vs Sea Eagles is exclusive to Fox League. If you're an existing Foxtel customer you're all set, otherwise your best option is to watch via Kayo Sports. You can watch for free using this 14-day trial.

For the second time in 43 days, Canberra and Manly face each other with plenty on the line. Last time, in round 17, the Raiders stormed back into finals contention with a shock 30-16 win over the Sea Eagles at 4 Pines Park.

This time around, the Raiders are still in a battle to secure a finals berth but meet a Sea Eagles team in simply sparkling form albeit without Tom Trbojevic.

When is Raiders vs Manly?

This match kicks off at 6pm AEST on Friday 20 August at Suncorp Stadium in Brisbane.

How to watch Raiders vs Manly Sea Eagles live online

Kayo Sports, Foxtel iQ and Foxtel Now are your only options for watching this match-up. It is not on Channel 9. Considering its price, free trial and accessibility, we think Kayo is the way to go. You can see further details in our comparison of Kayo vs Foxtel.

This match-up will not be shown on free-to-air television. In fact, none of Manly's 3 remaining games will be shown on Channel 9, while only 1 of Canberra's is on free-to-air. That means fans of either team should strongly consider signing up to Kayo to ensure you get every game of every round live or on demand.

All up the platform has more than 50 sports for you to choose from including AFL, NBA, UFC, Formula 1, MotoGP and much more.

New customers to Kayo get a 14-day free trial to test it all out. After that, Kayo costs $25 a month and you can watch the action on 2 screens or devices at once. There is also a premium option for $35 a month which gives you an extra screen. You can check it all out in our Kayo Sports review.

Unlike other broadcasters, Kayo has a wide range of special features. They include SplitView, which lets you watch 4 sports at once on the same screen. Interactive Stats, No Spoilers, Key Moments and choose your own camera are also options. 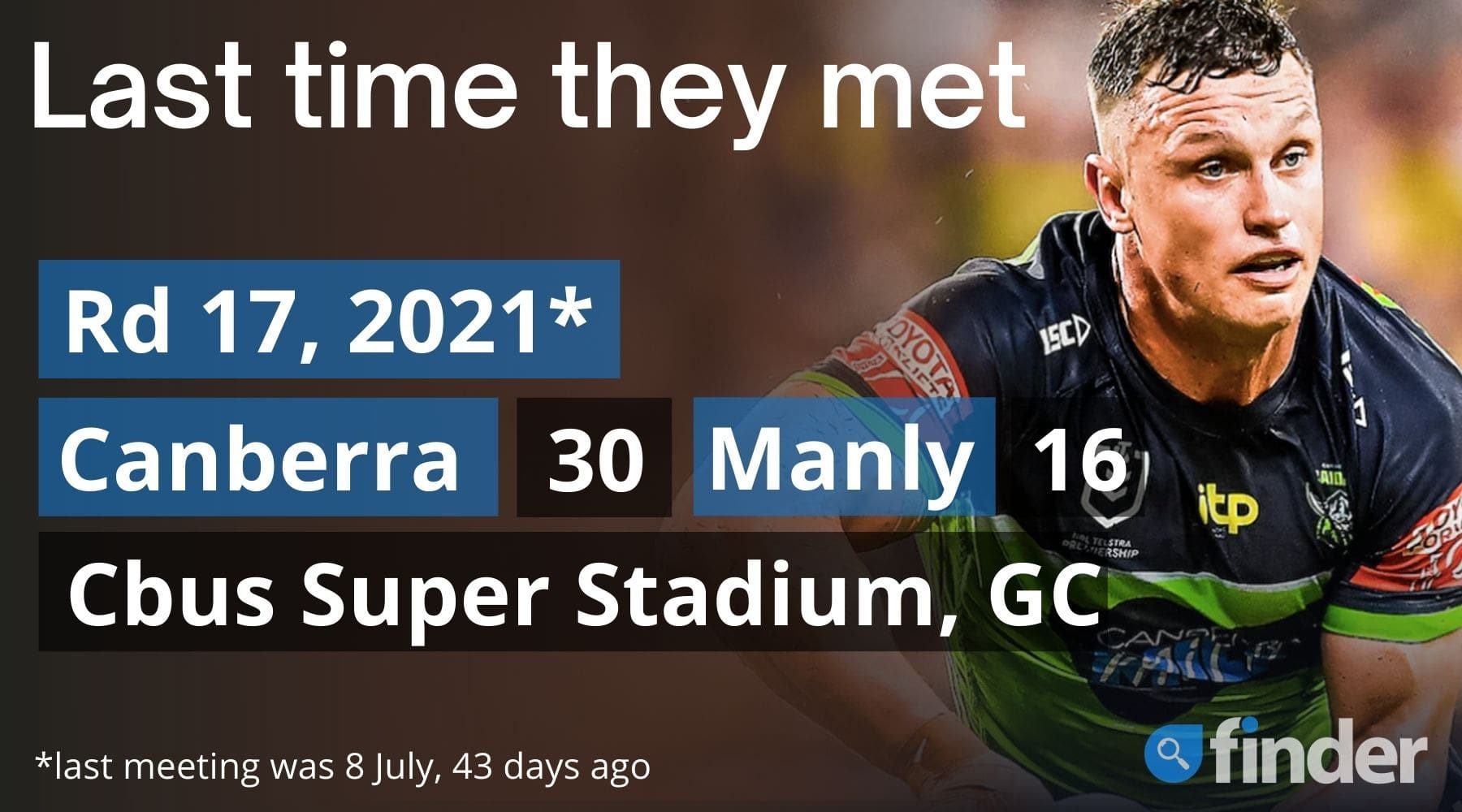 Manly had named superstar full-back Tom Trbojevic for the Sea Eagles' massive clash against Canberra, but he has since been ruled out after a cheekbone scare suffered in last week's stunning 56-10 win over Parramatta.

Tevita Funa was named at fullback in jersey 19 to replace Tommy Turbo, but we're expecting Ruben Garrick to play there instead.

Both teams have already changed centres at the selection table. The Sea Eagles have lost Brad Parker after he was knocked out due to a dangerous tackle from Parramatta star Ryan Matterson, who copped a 3-match ban from the NRL for the hit. Parker has been replaced by Moses Suli. Raiders skipper Jarrod Croker, out after a head knock, has been replaced by Sebastian Kris at centre.

Canberra's 30-16 win over the Sea Eagles last time out was a surprise to many. Sam Williams helped himself to a pair of tries in what was his 101st NRL game. Williams was ably helped by Matt Frawley, with the pair's kicking games heaping pressure on Manly throughout the match.

Gallant losers last week to runaway title favourites Melbourne, the Raiders simply cannot afford to drop this game. They sit in ninth following the loss, equal on points with eighth-placed Gold Coast but with a final round match against the Roosters, who thumped Canberra by 28 points last time out, a loss here spells doom.

Manly, meanwhile, just want to keep winning and scoring following the 10 tries they ran in against the Eels last round. The Sea Eagles have now scored the third most points in the competition this season. With games against Canterbury (currently 16th) and North Queensland (14th) to come before finals, Manly can enter September with real zeal should they avenge the round 17 loss to the Raiders this weekend. We think they will.

Want more information on sports streaming? You can see a comparison of Kayo vs Foxtel here. You can see our full 2021 NRL season draw here..