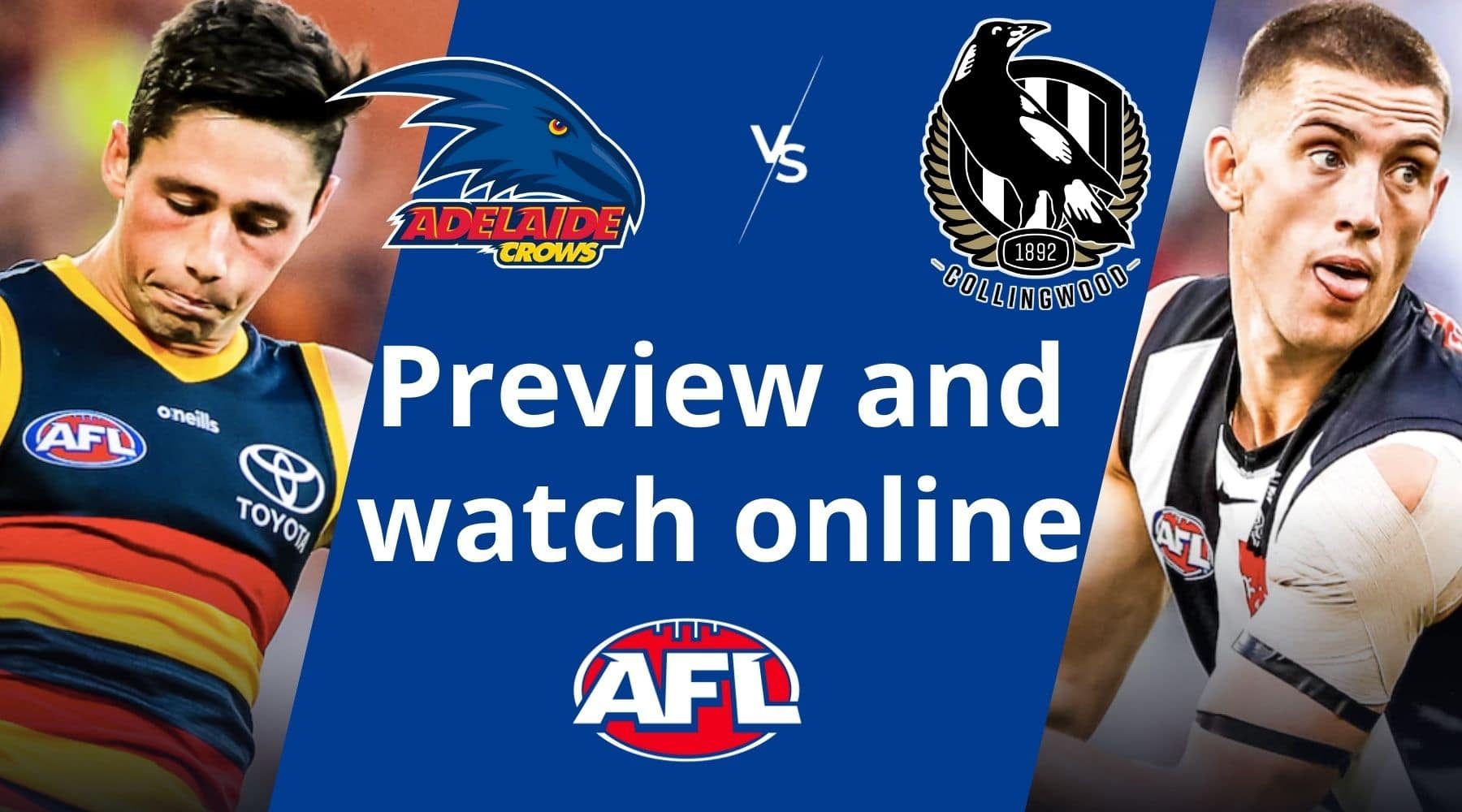 Much-improved Adelaide hosts the fly-in, fly-out Collingwood Magpies at Adelaide Oval on Saturday. This is how you can tune in.

SUMMARY: Crows vs Magpies is on Channel 7 in South Australia. Everywhere else in the country you need access to Fox Footy. Unless you're already a Foxtel customer, your best option is to watch live on Kayo Sports. You can watch for free using this 14-day trial.

Adelaide can end a five-year drought when they host an understrength and under seige Collingwood at Adelaide Oval on Saturday. The Crows enter the game full of confidence after three solid performances against West Coast, Melbourne and Richmond in recent weeks and will fancy their chances of knocking off the Pies for the first time since 2016.

Collingwood, meanwhile, endured another difficult week in what's becoming a season of difficult weeks. The Pies were whacked by all and sundry after managing just one goal in three quarters against Geelong. All up they have lost eight of their last nine matches and have just two wins for the season. They've also lost star ruckman Brodie Grundy to injury for at least the next fortnight.

When is Adelaide vs Collingwood?

The opening bounce is at 5:05pm AEST at Adelaide Oval on Saturday 5 June.

How to watch Adelaide vs Collingwood

Channel 7 and Foxtel share the rights to AFL matches in Australia and the broadcasts vary from state to state. As mentioned above this game is on free-to-air TV in South Australia. Anywhere else in the country you need access to either Foxtel iQ, Foxtel Now or Kayo Sports.

We have a full guide to watching the AFL season here. Kayo Sports is our pick of the bunch as it allows you to get Fox Sports without committing to Foxtel.

You can watch Adelaide vs Collingwood and much more live sport for no cost using Kayo's 14-day free trial for new users. After the trial period, a Basic subscription is $25 a month to watch on 2 screens or $35 a month for a third screen. You can check it all out in our Kayo Sports review.

In total Kayo broadcasts more than 50 sports. After the Pies take on the Crows, you can watch more AFL, tune into some NRL with the Storm taking on the Titans or a bunch of motorsport, including both Formula 1 and MotoGP qualifying.

Kayo also has a wide range of special features to add to your viewing experience. SplitView lets you watch up to four sports at once on the same screen. Other features include Interactive Stats, No Spoilers, Key Moments and more. 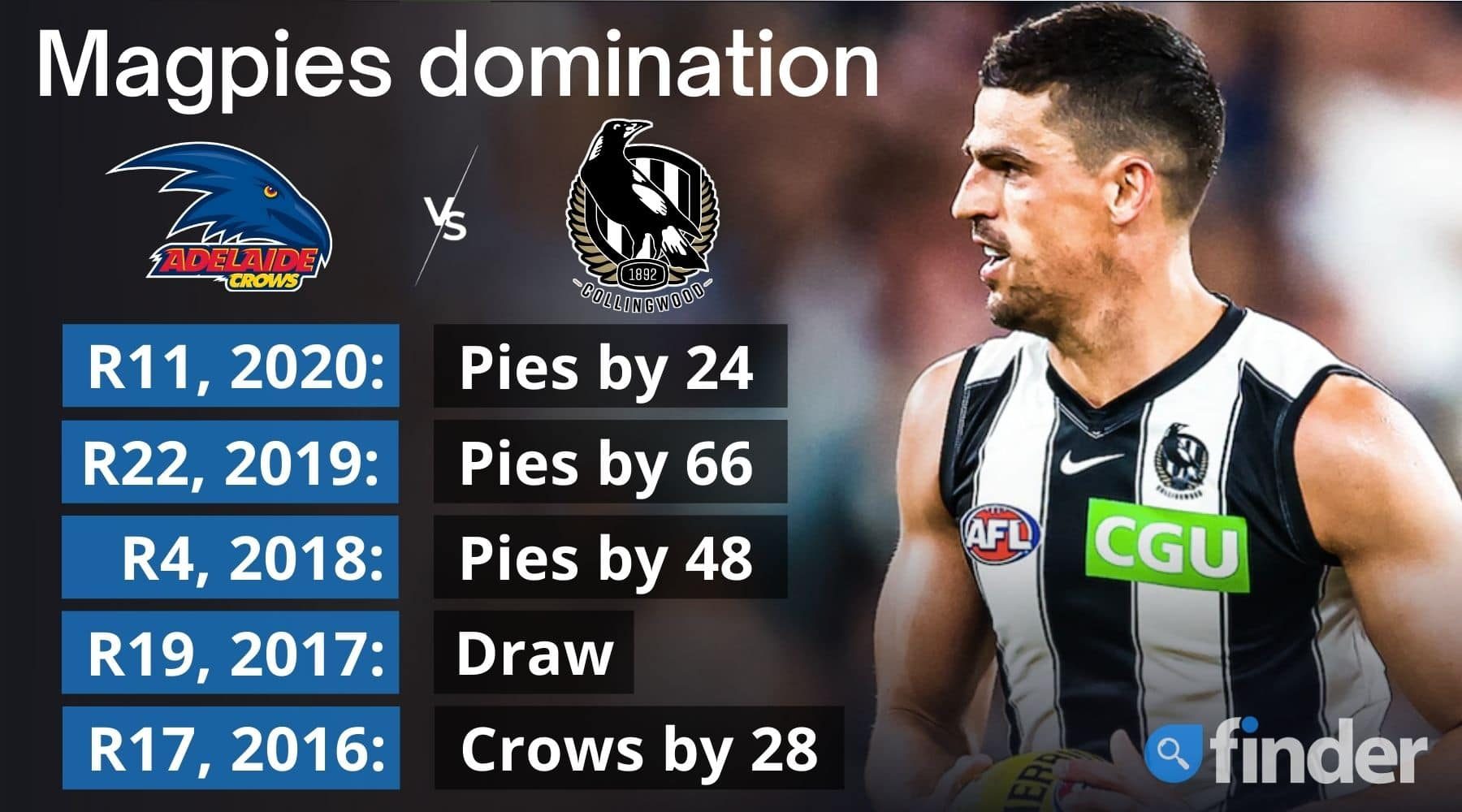 Who will win Adelaide vs Collingwood?

We think the Crows. Further evidence of Adelaide's improvement under Matthew Nicks was on display in a strong effort against powerhouse Richmond last week. The Crows kicked six first-quarter goals and led the reigning champs until late in the second quarter before the Tigers took control.

Rory Sloane was impressive, clocking up 16 contested possessions and 9 inside 50s to go with 29 disposals for the game while old mate Taylor Walker continued his football revival show, bagging 4 goals. They'll each be vital against the Pies.

Grundy's loss and the ordeal they face just getting to this game due to coronavirus protocols will prove too much. Adelaide's last win against the Pies came way back in round 17, 2016. They'll end that drought with a six-point win on Saturday.