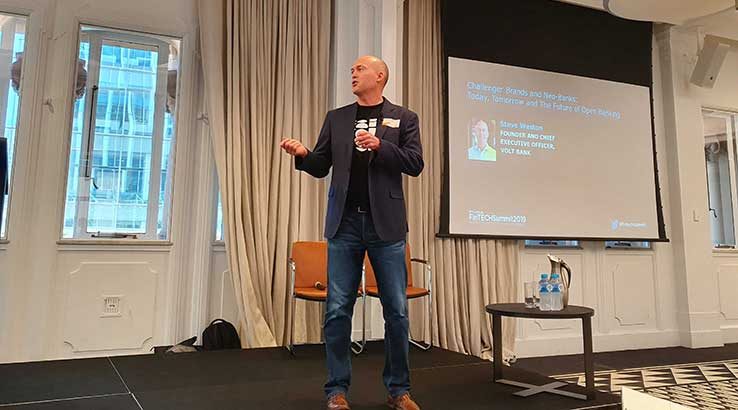 The bank's first product will launch next month.

A way to block yourself from spending at certain stores and a single view of all your accounts and loans are just some of the features that will be available from Volt Bank's soon-to-launch products. Speaking at the FinTech Summit event in Sydney on Thursday, co-founder and CEO of Volt Bank Steve Weston confirmed some of the features of the bank that he started developing on an exercise pad the night of the 2017 Federal Budget.

"On budget night, there were a few process changes that were introduced that would make it possible [to get a banking licence]," Weston said. "And I say possible because it certainly wasn't easy."

Now, over two years later, Weston confirmed that the bank's first product, a savings account, will launch to the 36,000 customers on its waiting list next month. Like all neobanks, Weston promises the sign-up process will be very quick.

"You can open your account quickly. And then when you have the account. We start doing things that banks typically haven't," he said.

One of those things is a biometric selfie which will be released in later versions. Weston described it as a "selfie video". After taking a photo of their driver's licence or passport, users will then be asked to turn on their smartphone cameras and prove their identity by being asked to blink, smile or turn their heads. This is to combat potential fraud of a "selfie" verification.

Weston also confirmed that customers will be able to import transactions from their existing bank into Volt.

"Most of us will not switch banks at any time in our lives because we've got payment records set up and it's just a pain, so we just stick with what we have," he said.

When they open an account, customers will be able to import their payment records to see their transaction history and balances across all of their accounts.

"So just overcoming one of those key inertia points that stop it switching today," he said.

The ability to see multiple accounts is also a feature offered by 86 400, which launched its transaction account and savings account products to the public in September of this year.

Weston also said the bank is currently working on a feature to allow customers to see interest rates that are being paid on deposit accounts and charged on loans in their accounts.

"I would hazard a guess that it will take the major banks a very long time to give their customers that level of transparency, not because they can't do it, [...] but the facts are that their interest rates generally aren't competitive."

While this feature will not be available with the first product release, it's likely to be a welcome one. This week Treasurer Josh Frydenberg ordered the Australian Competition and Consumer Commission (ACCC) to investigate home loan interest rates for both new and existing customers, including why cuts made by the RBA are not passed on in full.

"The future of banking can be a whole lot more transparent than it has been," said Weston.

Customers will be able to set a savings goal in their account which Volt Bank will then be able to calculate to help them reach the goal by having visibility on their salary, regular bills and debt repayments.

Going a step further, Volt Bank also plans to allow customers to block themselves from making purchases from certain merchants. He says this feature will be optional but should help people in various situations, including those that want to cut down on shopping or even those that want to stop gambling.

"If you really appreciate customers, you'll know that not all of them are perfect. None of us are, and some of them have trouble with discipline."

Volt Bank is currently staff testing its savings product and plans to launch it next month to those on its waitlist, with a public launch by the end of the year. It will launch the rest of its line of consumer products, which will include a bank account, personal loans and home loans, by October next year.