Volkswagen Polo Review: How does a score of 79% compare? 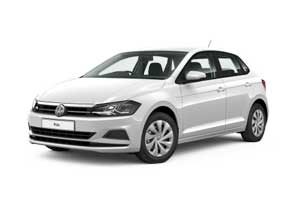 Avg. critics score: 79.00%
4 critics
How did we calculate this? We analysed and aggregated the scores of Motoring, Car Advice, WhichCar, CarSales and Practical Motoring to bring you the finder.com.au score. This is a comprehensive score that brings together the four different expert ratings you see below.
finder.com.au is personal finance comparison site that provides you with the tools you need to make better decisions. Learn
how we work and how we make money.

Get a better deal on a Volkswagen Polo

How does the Volkswagen Polo compare with its peers?

A comprehensive review of the Volkswagen Polo

There are four different trim grades for the Polo: Trendline, Comfortline, Style and GTI.

Comfortline models are equipped with a more powerful 85kW mapped engine. The drive-away cost for six-speed manuals is $23,834, while the automatic model costs $23,990.

Click on a price to compare car loans for the Volkswagen Polo.

For non-GTI models, only Pure White is available for no cost.

GTI Polos can be bought in either Flash Red or Pure White for no additional cost. $500 premium colours include the following:

The above prices are recommended drive-away prices from VW Australia. They include 12 months rego, CTP, dealer delivery fees, stamp duty and any other costs. The prices are calculated based on a "rating one" driver aged 40 with a good driving history and the vehicle being in a garage in NSW postcode 2000.

It wouldn't be unfair to call the Polo the benchmark that other manufacturers aspire to achieve. It's a little bigger than some of the competition and it can cost more, but overall, reviewers seemed to suggest this is one hatch you have to at least consider.

There are two engines fitted into the Volkswagen Polo: a frugal 1.0-litre and a performance 2.0-litre, both petrol.

The small 1.0-litre TSI petrol engine has just three-cylinders. Thanks to a turbocharger, the lower-tuned variant fitted to Trendline models outputs 70kW @ 5,000-5,500rpm. Torque measures 175Nm with 2,000-3,500rpm. On the more powerful version of the engine, power jumps to 85kW and torque hits 200Nm.

On Trendline models, buyers can choose between a five-speed manual, six-speed manual and a seven-speed DSG.

You might think a 1.0-litre, three-cylinder petrol engine is a bit feeble. Unexpectedly though, car reviewers reported these small motors are endearing and characterful. Others spoke of how the performance and acceleration quickly cause you to forget how small the engine is.

The GTI's 2.0-litre is described as mettlesome and punchy. All engines were said to be smooth and syrupy.

Transmission-wise, nobody had any bad words about the manual gearboxes and it seems the DSG is generally well appraised. However, more than one journalist mentioned the dual-clutch automatics tendency to be hesitant. Around town, that could be a real annoyance.

Here's how much fuel the VW Polo will use.

According to the Green Vehicle Guide, the 1.0-litre Trendline model (with the lower power output) is rated with the following fuel efficiency:

The above figures are for the five-speed manual gearbox. Driving 14,000kms a year, with two-thirds spent in towns, you'd spend approximately $1,191 on petrol.

With the seven-speed auto, fuel use is listed as follows:

Based on those figures and the above driving conditions, yearly fuel costs would be around $1,214.

In the Comfortline and Style models with the more powerful engine, fuel economy is as follows:

Fuel costs would be around $1,207 for this particular model.

The GTI's 2.0-litre is a little less frugal.

A word on factory fuel economy numbers
Factory fuel economy figures are determined using a strictly stipulated testing procedure. Consequently, it doesn't factor in ever-changing variables you encounter on public roads. Things like traffic conditions, mechanical state of repair, driving style, topography and the weather can all affect fuel use.

Reviewers suggested when on test, the fuel-economy numbers were slightly idealistic, but only out by less than half a litre – which is actually quite impressive by comparison to other vehicles. One fuel-related quibble that did seem to bother reviewers was the requirement for 95 RON petrol.

Beneath its Volkswagen exterior metalwork, the Polo shares the MQB architecture used by sister-carmakers like the Audi A1. That should translate to it having pretty on-point handling characteristics. According to car reviewers, that certainly seems to be true.

Testers say it is a lively and enjoyable car to drive. Thanks to a bump up in dimensions, motoring experts told of how confident and stable the Polo felt. Basically, it appears well-suited to dashing through tight city roads, without having to strain too much on highways.

However, it isn't a perfect story. Some motoring writers spoke about the steering being only good, lacking an extremely accurate feel. Reading between the lines, the general feeling is the Polo is accomplished and sophisticated with a grown-up feel. Quite a number of the motoring press deemed the ride to be overly harsh, leading them to call the Polo the best all-rounder, but maybe not the best to drive.

The Polo specification is more or less on par with its rivals.

The lowest-entry price point for the range, the Trendline has many pleasing features:

The Comfortline Polo was often held up as the pick of the range. First, for the extra money, you get a more powerful map applied to the engine, giving you an extra 15kW and more torque. The five-speed manual option is done away with in favour of a six-speed manual, which should give you a few more gear ratios to play with – eking extra performance from the engine. Going for this model also opens up the possibility to buy the optional driver assistance and R-Line packages.

Standard features include the following:

The Style gets the same upgraded engine as the Comfortline. It's only available with a seven-speed automatic transmission though. For the money, you also get the following:

This is VW's alternative to the Golf hot hatch. It has a zesty 2.0-litre petrol engine and a six-speed automatic gearbox. In addition to the Comfortline model, the GTI has the following:

A pocket-sized car that's gotten a little portlier over the years (haven't we all?), journalists favourably reviewed the Polo. It's probably best summed up by one writer, who said it was the standout all-rounder of the segment. It's not flawless by any means, but it's above average in every way. If you want a small-ish hatchback with good equipment levels, composed handling and a reserved style – the Polo is probably the one you should go for.

Compare car loans below in seconds and you could save hundreds of dollars over your ownership.

Compare some options to finance a 2017 Volkswagen Polo