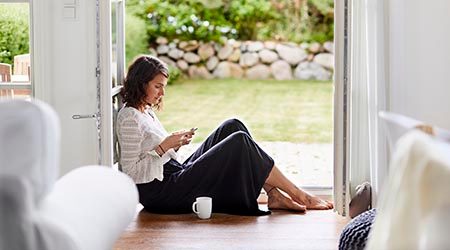 Vodafone has gone and replaced its SIM only mobile plans with a new "Infinite" range that lets you browse for free, even after running through your monthly data allowance. It has replaced the old 1.5Mbps cap on excess data with a limit of 2, 10 or 25Mbps, depending on what plan you buy.

You can check out Vodafone's new Infinite range of plans below.

While 2Mbps is about the same speed as before, 25Mbps is equal to what you might get on the second speed tier of an NBN home Internet connection.

This makes Vodafone the first Australian telco to offer such high speeds on bonus data, all without a single excess data charge in sight. Like its old range, four out of Vodafone's five new Infinite plans offer international minutes or unlimited calls to destinations around the world as well as discounts for bundling them with other services.

What do these speeds mean for customers?

The slight jump from a 1.5 to 2Mbps cap on Lite/Lite+ Infinite plans won't be making waves for Vodafone customers, but the higher speeds can certainly make a difference. Here's an idea of what you can do with each:

To balance out these increased speeds, Vodafone has raised prices across the board for its Infinite plans. Most have gone up by $5 per month, although the Ultra 150GB plan has jumped in price by $40.

Until 13 October, new customers will receive a promotional price discount across all of Vodafone's Infinite plans, making them a lot more attractive if you're in the market for a new mobile plan. If you have an eligible device, you may be able to get 5G access, but be warned – Vodafone's 5G network is extremely limited and currently only live in some parts of Parramatta.

How do they compare to other providers?

With the promotional pricing available until 13 October, Vodafone's 60GB plan compares strongly against other, similar deals.

It provides the same full speed data as Optus for less as well as providing infinite data past your cap. Likewise, it beats out Vaya for data, while only costing a single dollar more.

However, it struggles to beat Circles.Life's Finder exclusive 200GB for $28 offer, especially if you're not using more than 200GB of data per month. High-speed infinite data only becomes useful if you regularly burn through your monthly allowance.

Vodafone's 60GB plan is a great deal right now, though once you're done with the $10 promotional discount, it loses quite a bit of its value.

If we run a similar comparison of Vodafone's 100GB plan for a discounted $55 per month, it still ends up cheaper than both Vaya and Optus for the same or more data. Once again, though, Circles.Life's $28 for 200GB plan stands out as a superior option – so long as you aren't planning to exceed 200GB in a month.

How does it compare to NBN 25 plans?

We've seen how these new Infinite options line up against other mobile offerings, but how well do they compare to actual home Internet? We've stacked up Vodafone's 150GB Infinite plan against NBN 25 fixed-line connections.

*These are promotional prices for the first six months of your plan.

As you can see, Vodafone's mobile plan performs incredibly poorly against dedicated fixed-line NBN 25 plans since it costs nearly double as much for speeds that may only be slightly better.

This is just as well since Vodafone's Fair Use policy dictates that you aren't allowed to use the Infinite plans as a substitute for home Internet. You are allowed to tether your personal devices to a certain extent, but if you're using it as a substitute, you might get kicked out by Vodafone for violating its terms of service.

Is Infinite data the same as "unlimited" data?

This is a bit of a tricky one. Both Vodafone and Telstra offer Infinite and Endless data plans respectively, but these plans can't be advertised as being "unlimited" plans even though you don't get charged for going over your data limit. Because both providers slow down your speed after your monthly data allocation, the plans aren't seen as being truly "unlimited" since you're not getting full speed the entire time.

Whatever way you look at it, these new Infinite plans have made Vodafone more competitive in the world of "unlimited" data. Telstra is currently still only offering 1.5Mbps speed caps on excess data, while Optus is the only provider with truly unlimited data on its full speed "unlimited data day" for $5.

It's an interesting move for the present, and it will be even more interesting to see if these speed caps increase once Vodafone's 5G network is more extensively available.