Vietnam Airlines' domestic business class A321 product offered efficient and polite service, but the seat and inflight meals were basic, and the cabin was in need of an update.

An efficient domestic business class flight let down by a tired cabin.

I was recently in Vietnam as a guest of Vietnam Airlines, and as part of the trip, I took this domestic flight from bustling Hanoi to the sunny beaches of Da Nang.

At the time of writing, Vietnam Airlines had just received the first of 20 new A321neo aircraft, and these new aircraft will have updated business class seats.

Vietnam Airlines travels to 21 destinations within the country, and its A321s have a mixture of economy and business class seats. As mentioned, this trip was part of a press tour with Vietnam Airlines, so I did not use points or cash to pay for it.

You can book a trip like this with Vietnam Airlines using points, but as mentioned in my review of the Dreamliner product, you'll need points in the Vietnam Airlines Lotusmiles program, or one of the SkyTeam alliance airlines' programs. Unfortunately, this doesn't include any Australian airline programs, but the SkyTeam alliance does include some great programs like Korean Air SKYPASS and Delta SkyMiles.

If you buy tickets for this flight, you can credit points to any SkyTeam program you may be a member of. Standouts include the Alitalia MilleMiglia program and the Delta SkyMiles program, which can also be used to redeem points for Virgin Australia flights or even other schemes like the SKYPASS program.

After a quick priority check-in, we walked upstairs to the Hanoi Lotus Lounge to wait until our flight was ready to board. 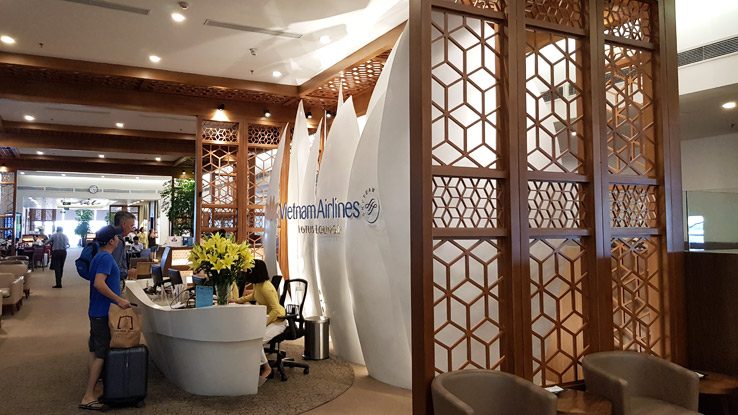 It was a large, modern lounge with plenty of seating, large workstations and plenty of departure screens and televisions. It had a great view of the runway and apron too, lots of drinks to choose from, as well as a massage room and a smoking room. 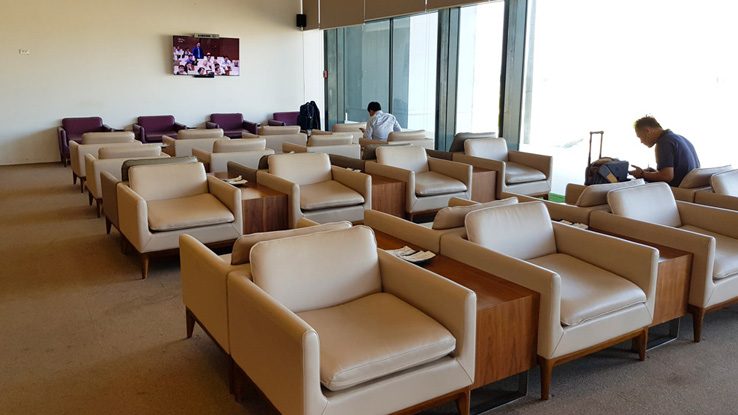 It was let down by the somewhat basic food options (although you could make your own pho!) and the extremely frequent departure announcements. 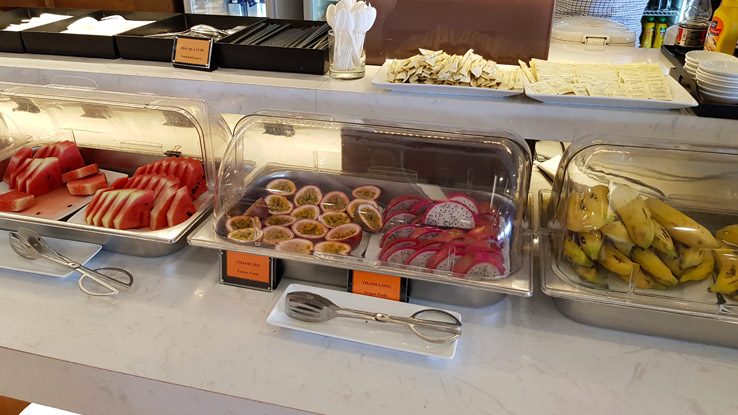 Boarding was on time, and because of priority boarding, we skipped the large queue and settled in for a relaxing flight while the rest of the plane boarded.

The aircraft was a six-year-old A321. Seats in the cabin were arranged by twos on each side of the aisle, with a curtain dividing business class from economy class. There were 18 business class seats in total, and I took 4A, which was a window seat at the end of the business class cabin.

The business class cabin on the Vietnam Airlines A321. Source: Seatmaestro

The cabin was tidy but looked dated and worn. There were no modern features like screens or lie-flat seats, which, admittedly, aren't a necessity on a flight this short. The seats were made from a dark green fabric with some basic seat controls. 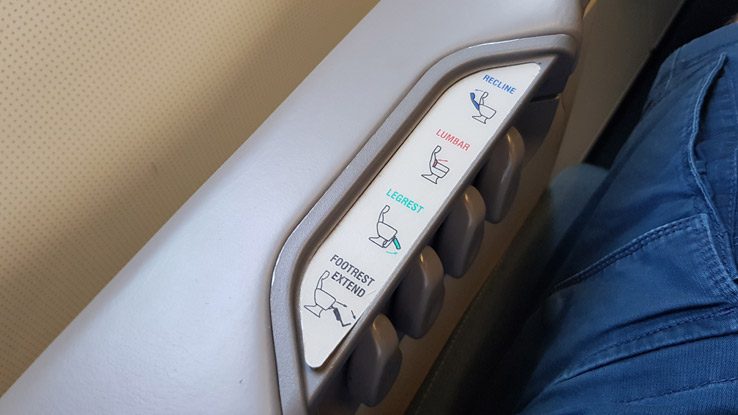 In a plane this small, there's no perfect seat, but you may wish to avoid seats close to the galley and bathroom, such as row 1, for noise issues. I found row 4 to be a great spot. 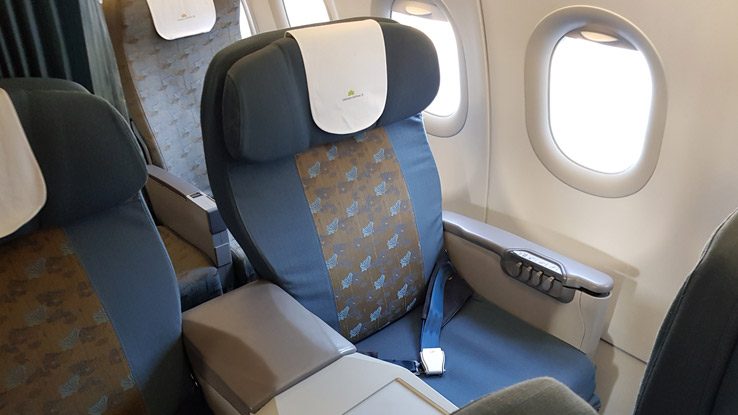 The seats on this flight were large, older-style business class seats with plenty of legroom, even for one of my very tall companions. As mentioned, there were options for reclining, lumbar, leg rests and extending the footrest. 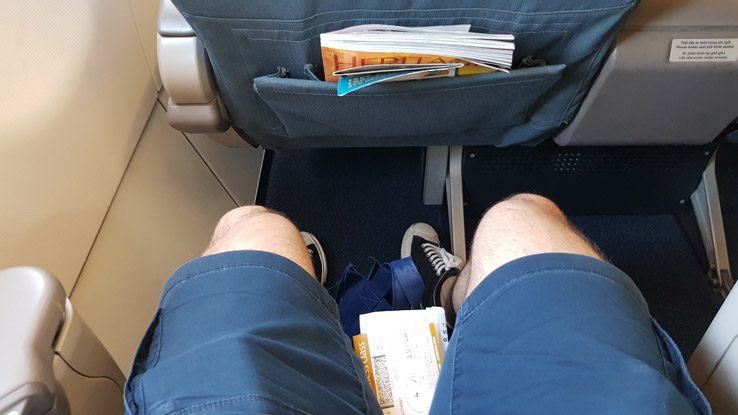 The seat itself was quite soft and comfortable. There were no entertainment options on this flight, just fold-out screens at the top of the cabin showing the flight progress, so make sure you bring a tablet or magazine to keep you busy.

Refreshing cold towels were given out before takeoff, along with a welcome drink of either water, orange juice or apple juice. Newspapers were also offered.

A small meal was served, which is always welcome on a 1-hour flight. It was an open-faced chicken and salmon sandwich. Drinks were also offered and I ordered a soda water, which was served in a real glass.

The cabin crew were polite and performed admirably on the flight. There were some nice little touches like a tablecloth for the meal service.

The sandwich itself was very basic, which contrasts with some of the great meals that are served on competitive domestic business class airlines in Australia like Virgin. It was divided up into a salmon piece and a chicken piece. 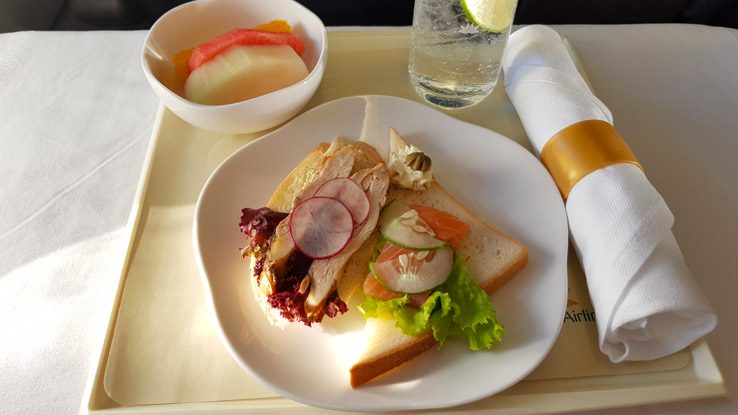 The cabin crew were very friendly and professional too. We were served 10 minutes or so after takeoff and everything was cleaned up with 15 or 20 minutes to spare.

We were also given hot towels before landing, which were great after a warm afternoon of travelling.

Overall, this was much more than I would have expected on such a short flight, and it was a good experience.

For a short and simple domestic flight of this length, I'd give this flight a 4 out of 6. The service and food were decent, considering how short the flight was, and the cabin crew were friendly and efficient.

Newer seats and broader entertainment options would elevate this experience and, as mentioned, the new A321neo planes that are being added to the Vietnam Airlines fleet may address this. 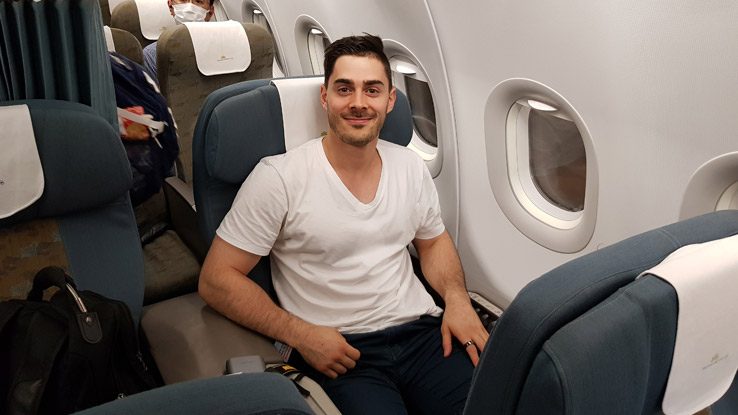 Disclosure: Marc Terrano travelled to Hanoi as a guest of Vietnam Airlines.

Fantastic service and a smooth and easy journey is what I received on the inaugural Gold Coast–Seoul flight.

A mediocre hard product, coupled with a much improved dining experience and genial service.

We fly from Tokyo to Singapore to test out JAL's business class seat.

Want to write a review for us?