Twice the stability and double the on-the-go gaming.

The Nintendo Switch is a handheld/console hybrid that has many great features. Its first party titles are almost always must-own affairs, third party devs know how to milk the system to make PS4/Xbox One ports that punch well above their weight and the eShop has blossomed into an indie paradise. The only downsides I've struggled with are the Switch's short battery life and its inability to sit up straight when asked.

Because let's be honest here: that little fold-out stand on the back of the console feels about as sturdy as a "load bearing" nine of clubs in a house of cards. The weird asymmetrical design of it doesn't help either – if you aren't sitting the console on a perfectly flat piece of real estate it's going to drunkenly fall over backwards and stare at the ceiling. Many times I've had to give up using my Switch on an A380 tray table during an international flight. The slightest jiggle from minor turbulence – or the jerk sitting in front – would cause a keel over.

The second obvious issue while trying to get one's Breath of the Wild on at 40,000 feet is the fact that 13 hours to LA does not gel well with the diminutive battery of the Switch. Your mileage on battery life will vary wildly with what you're playing – crank the brightness and volume up for a shoot through Doom (the game I honestly thought could never come to this console) and you'll get three hours of play. Play a less demanding indie title and subsist with the screen brightness turned down to the nigh un-viewable levels of the original Gameboy and you might get six hours of play time. 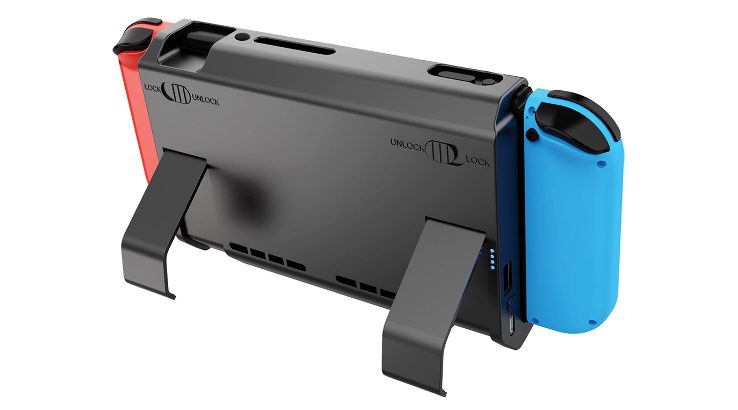 Fortunately, Venom has decided to solve both problems at once with its nifty Power Pack & Stand unit. The concept is as simple as the installation. A claw-like plastic housing clings to the back of the console and piggybacks into the power port on the bottom of your Switch. A plentiful 10,000mAh battery can then provide you with additional power, and two extendable kickstands fold out to provide your Switch with stability it has never known before.

Almost exactly doubling the battery life of your Switch is pretty darn handy. That said, you're going to need to allow a good two hours to fill this Power Pack & Stand up to capacity with juice (I always charge a little longer because I was raised to believe in the boogeyman that is battery memory).

Annoyingly, your means of powering up this unit are limited from the get-go – the only cable included is a short USB-C wire that lacks a power adaptor. You'll need to fuel up through a device with a spare USB port or shell out for a cheap plug. Alternatively, dislodge the official charge cable that's probably neatly and securely hooked into your Nintendo Switch dock. It's not ideal.

While I think Venom's design is as ergonomic and svelte as can be all things considered, it has to be said that with extra power comes a great big butt. Your average Switch is roughly 400g when it has two saddlebag Joy-Cons attached; the Venom Power Pack & Stand by itself is a touch over 300g. Thank goodness this battery unit comes with an inbuilt stand, because when you drastically increase the weight of a handheld it changes the user experience considerably. 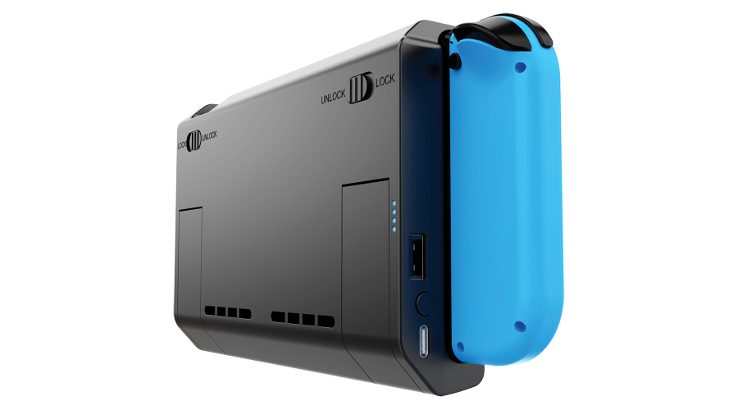 Personally, I liked having the extra heft and found my grip on the pencil-thin Switch was improved due to the extra housing thickness. I did however notice my sons (aged 6 and 8) would resort to playing in a prone position on the floor or a lounge rather than sitting in their usual cross-legged manner. The weight was too distracting for them in pure handheld mode.

When it comes to propping the Switch up this unit easily does a much better job than Nintendo's design. It wins straight out of the gate by offering two sensibly placed, slightly J-shaped kickstands as opposed to one straight stand that's not centrally placed. The stability offered is greatly improved, though it's a shame the legs are on a loose hinge and can't be locked at a variety of angles – you either have them fully extended or not at all. Those of you with long fancy nails should probably be warned that unclipping the legs from the main unit will require a decent amount of force (a two-handed grip and two fingernails doing some pretty serious prying).

In terms of ergonomics and creature comforts, you get a spare USB port on the left to allow you to charge something other than a Switch. There's also a small test button to see how much charge is left (represented via four blue LED lights) and the unit has been designed with a series of rear vents to allow air flow to the back of the console. Likewise, holes have been chiselled along the upper lip to ensure you still get access to the usual Switch features (game card slot, volume, power, headphone jack, etc).

It looks as though Venom has made a small effort to future proof this product too – the lip can extend upwards by a few centimetres to theoretically allow some taller, future Switch model to slot in. Once you're happy with the desired height of the lip you can set it via two sliding lock mechanisms on the back. Nifty.

Whether Venom's predictions on the footprint of Nintendo's Switch MK II or XL is correct remains to be seen. But for now, I can confidently say that this is more or less the best charge and stand combo for the Nintendo Switch you can go out and buy today. Don't get caught on a long commute without it.

Doubles your playtime and doubles your stability in free-standing mode, too. The trade-off is twice the thickness and a handheld that becomes almost twice the weight. All acceptable drawbacks if all you care about is going hands free.