Soon, Australia could get substantially better accommodation for cryptocurrency businesses.

The new APRA submission is essentially a crystallisation of earlier proposals by the Council of Financial Regulators (CFR), the coordinating body of Australian financial regulators which includes APRA (general supervisory, innovation and financial stability regulation), ASIC (securities and investment regulation), the Australian Treasury and the Reserve Bank of Australia.

The gist is that responsibilities should be better clarified for different regulatory bodies, and the regulatory framework for stored-value facilities could be updated in a way that better suits current and future technologies like stablecoin ecosystems, managed cryptocurrency wallets and many more.

"Under this proposal, APRA’s role in the framework would be to oversee wallets that are widely used as a means of payment and store significant value for a reasonable amount of time (e.g. potentially Facebook’s Calibra proposal)," the submission says.

On the whole, this APRA proposal is getting quite close to the pointy end of the whole process. It's built on findings that date back years, but the fintech committee receiving the proposal will present its final report by October 2020.

The short version is that this is good for cryptocurrencies, wallets and similar things that want to operate in a well-regulated environment in Australia.

The long version is that you should read the rest of this article for a better understanding of what's going on and how it affects cryptocurrency, while bearing in mind that nothing here should be taken as legal, financial or any other kind of advice.

How it currently works

A purchased payment facility (PPF) is a facility that allows user funds to be stored for the purposes of making future payments. It encompasses a great many payment services as well as things you wouldn't typically consider financial services, such as gift cards and Opal cards. It also, arguably, should include managed digital currency wallets like the proposed Calibra wallet, centralised cryptocurrency exchanges and a range of decentralised finance (DeFi) services.

Currently, the regulatory framework for PPFs looks like this: 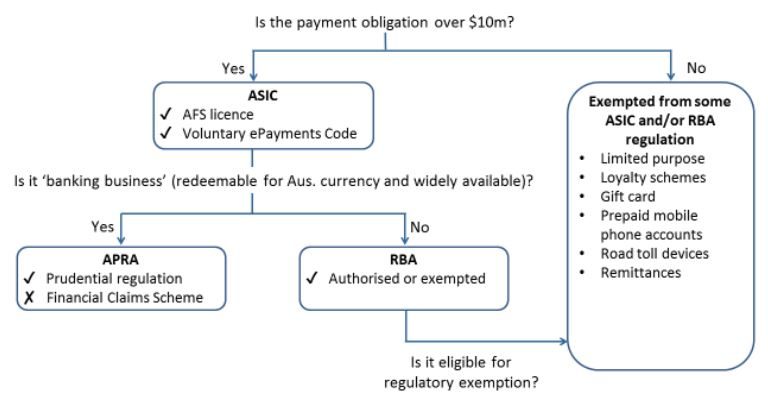 This system was devised in the 90s and tweaked a bit since then. A company will have different obligations depending on which box it ends up landing in. These include different reporting and audit obligations, capital reserve requirements and so on.

Unfortunately, almost everything that makes it through this flowchart either ends up being approved for an exemption or being a bank.

There's only one company currently in the APRA box of the flowchart – PayPal Australia. And every company that's ever gone through the RBA box is either one of these authorised deposit-taking institutions or it's been granted an exemption. Clearly there's some room for improvement.

The current regulatory framework "may deter potential new entrants and impose significant compliance costs; regulation may not be competitively neutral (for example, some [payment] providers may be subject to certain stronger regulatory requirements than a traditional [bank] when it is offering a similar service); and regulation may be stifling the development of this segment of the payments system," the CFR says.

These problems were among the central points raised by Australia's fintech startups in their own submissions to the committee.

The proposal is a reorganisation where more businesses will end up settling in the APRA and ASIC boxes of the flowchart, with changes such as dropping the "redeemable for AUD" requirement, and the introduction of new ways for smaller entities to get regulated as a PPF. 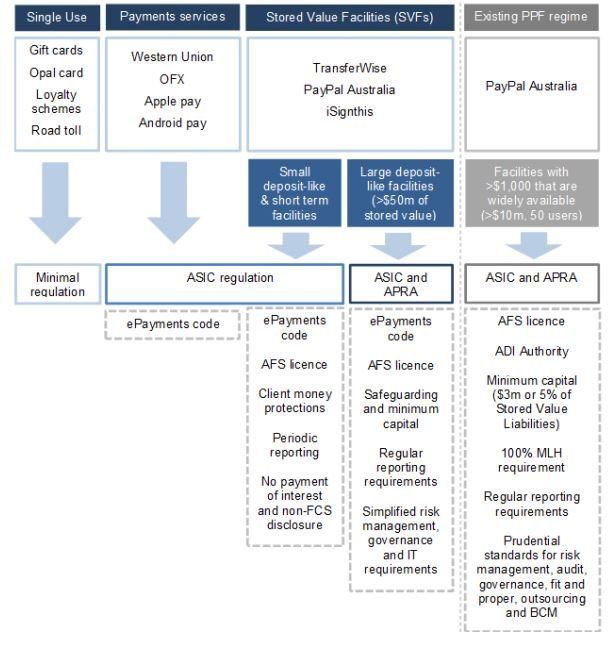 The idea is that this framework will naturally classify businesses based on their size and, therefore, their potential risk. Essentially, as you go from left to right, the businesses get larger and riskier as well as subject to heavier regulatory requirements.

It's been suggested that smaller businesses could get a lighter regulatory load in exchange for maintaining complete collateralisation, while larger companies could use fractional reserves in exchange for accepting tighter prudential controls.

The exact details of the new framework are still up in the air though.

"As part of this work, APRA has begun developing a new APRA principles-based prudential standard that simplifies the regulatory requirements and is able to accommodate a range of business models that have emerged. The timing of this will be dependent on the broader government response," APRA says.

How this applies to cryptocurrency

Under the current framework, digital currency businesses don't have too many realistic ways of finding clear regulatory ground. It's hardly welcoming for overseas companies either, as the whole category of "PPF" isn't too widely used outside of Australia. These proposals would lay the groundwork for meaningful expansion of Australian companies as well as allowing overseas cryptocurrency companies an easier way of serving Australian customers.

It's also naturally important for cryptocurrency companies that the "redeemable for AUD" requirement is dropped from the conditions for APRA supervision, as are the size requirements.

The recognition of 100% collateralisation, and a lighter regulatory load for services that maintain it, is also a strong point. Proving complete collateralisation is the go-to move for any crypto-finance service that needs to gain people's trust.

And speaking of trust, new regulations would also present a new way for crypto companies to legitimise themselves as well-regulated entities where customers can safely put their money, making cryptocurrency as a whole much more accessible.

A more flexible regulatory framework is also a better fit for digital assets where you could, for example, have a PFF staking digital assets on behalf of its customers through a separate third party, and paying dividends to its customers even as those users can also suddenly withdraw, trade or make payments with their staked funds.

And depending on how the new regulatory framework shakes out, it could also open the door to additional blockchain applications, such as better-automated auditing and reporting.

While everything is still subject to change, the situation is still quickly becoming clearer.