This could be just a me-thing, but ever since Sony's PSVR headset arrived, I've been hankering to use it to break the surly bonds of gravity and punch the face of God. Keep your driving games in VR (I already own a car) and no thanks to your first-person shooting (there's enough nausea in my life right now – it's called “every Saturday morning”). If you're after some real fun, folks, flying is where it's at. Once you lift off that runway for the first time, your heart never truly comes back down again – take it from a guy who's been skydiving and upside-down in a MiG fighter jet.

Sadly, PSVR owners have only been offered flights of pure fantasy up until now. There are some lovely be-a-bird sims, like How We Soar and Eagle Flight, and sci-fi fans will have already locked-on to the star ship rides in Eve: Valkyrie, Call of Duty: Jackal Assault and Star Wars Battlefront's painfully short X-Wing experience. As of now, anybody hankering for a true piloting experience can kick the chocks off Ultrawings and go reach for the skies.

It's basically a take on Nintendo's Pilotwings franchise. You start out with a small ultralight aircraft, and after a bunch of tutorials and challenges – which typically involve a lot of innocent balloon murder – you graduate to faster and more complex planes. Sounds simple, but frequently it isn't. As with all VR experiences, the sensation of movement can be a bit much for some players, and there's no rhyme or reason as to who'll be affected. I have friends who can whip about in Ultrawings like Lt. J.P. Maverick with his hair on fire, but then beg to have the PSVR headset removed after one lap in Gran Turismo Sport. I've also seen the opposite. Personally, I was OK with Ultrawings, and it should be noted that it offers a number of peripheral vision “blinder” options that can keep the upchuck reflex to a minimum.

You know what else is pretty sick? Full 1:1 hand controls via Move controllers and a bunch of cockpit switches to mess with. There's something indescribably cool about tweaking doodads on a dash as you go through a pre-flight start sequence (fuel, starter, etc). Once you've throttled up, you have to physically trigger-grasp the flight stick with one hand and manipulate the throttle lever with your other mitt. It becomes second nature quickly, but the ring/bullseye patterns you'll need to fly through become increasingly serpentine, requiring skilful use of aileron banking (awkwardly mapped to those tiny face buttons on the Move). 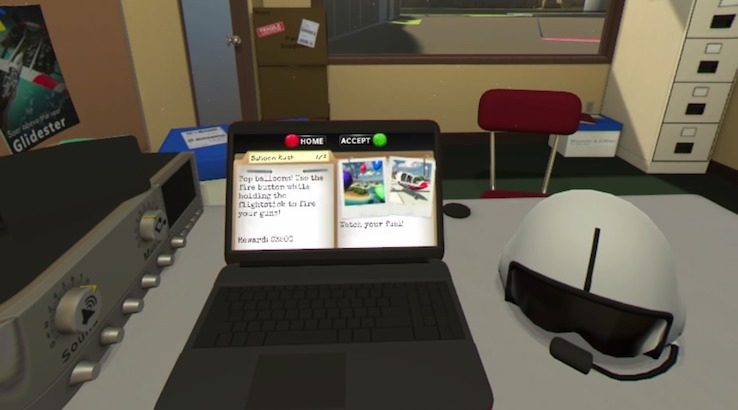 Wrap your head around all this and you'll soon fall into a lovely routine of challenge missions which last a few minutes and often end with a nail-biting landing (end result: either a medal or death). There's plenty of variation in the tasks you'll do for money, too. Zipping through more rings than Sonic on methamphetamine gives way to find-the-landmark photography runs, balloon killing that involves a physical gun and your best drive-by technique, plus a bunch more. Build up enough cash and you can take a free flight to explore the other islands in order to discover and buy additional airports filled with tons of new missions (and maybe even a new plane).

The sluggish ultralight you start out with is all well and good for beginners, but Ultrawings really opens up the throttle on fun when you unlock the experimental glider and the stunt plane, both of which swap out your pistol for wing-mounted guns. Each of these vehicles feels radically different and offers unique control quirks (the glider is particularly tricky as its upward thrust is limited by finite bursts of rocket fuel). Speaking of petrol, no matter which plane you're in, completing a challenge by landing that sucker on nothing but fumes is a real high point in the game. Conversely, doing your best meteor impression mercifully isn't realistically represented. I've died spectacularly many times. Zero PTSD so far.

Honestly, I was mightily impressed with the amount of content in Ultrawings, not to mention the addiction factor of the main gameplay loop. Only gold medals pay out the maximum cash for any given mission, so you'll find yourself constantly scratching about for enough moolah to buy into the next area. Plus, when you need a break from pushing the envelope, this peaceful and idyllic island-themed sandbox is an absolute joy to aimlessly fly through. It's not the most detailed world going, but it's both pretty and adequately filled with life. Life that cannot be destroyed with bullets. Because of course I tried that.

We reviewed Ultrawings on PlayStation 4 with a copy provided by the publisher.

Straddling the arcade/sim line, packed full of addictive challenges and brimming with content, Ultrawings represents damn good PSVR gaming. It's held back from greatness only by one or two weird control issues and a need for more aircraft.