Where to watch UFC Fight Night 163: Magomedsharipov vs Kattar 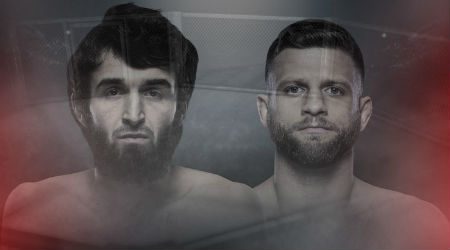 Zabit Magomedsharipov finally gets the chance to fight Calvin Kattar after their initial clash was rescheduled.

UFC is travelling to Russia for Fight Night 163, featuring an intriguing headline bout and a highly-anticipated heavyweight showdown. The event will be held at the CSKA Arena in Moscow and offer a card packed with local talent, so MMA fans have plenty to look forward to this weekend.

In the top billing at UFC Fight Night 163 Zabit Magomedsharipov will seek an important win against Calvin Kattar in what's shaping up to be a featherweight bout to remember.

Volkov will be fighting in front of his countrymen so it's expected he'll give it his all, especially since he lost his last fight against Derrick Lewis in late 2018, despite dominating. Volkov was initially supposed to face Junior dos Santos, but he pulled out of the event due to medical issues.

On the other hand, Hardy's journey to this moment was not without drama. The polarizing fighter originally won his last clash at UFC on ESPN 6 against Ben Sosoli via unanimous decision, but it was overturned to a no contest because Hardy used an inhaler between rounds.

Who will win Magomedsharipov vs Kattar?

Both Magomedsharipov and Kattar are up-and-coming featherweight fighters with plenty to prove, so the clash should keep viewers on the edge of their seats.

Magomedsharipov won his last fight against Jeremy Stephens via unanimous decision. He is currently ranked No. 5 in the UFC's featherweight division, while Kattar is No.11. A win this weekend would put him in a great position to be the next challenger for the title. Some would argue that the odds are mostly in his favour.

However, Kattar has plenty going for him as well. He is an energetic mixed martial artist and he won his last two fights against Chris Fishgold and Ricardo Lamas. We wouldn't dare to underestimate him.

When does UFC Fight Night 163: Magomedsharipov vs Kattar start?

The event kicks off at 4am (AEDT) on Sunday, 10 November. You can tune in for the main card from 6am.

How to watch UFC Fight Night 163: Magomedsharipov vs Kattar live

In Australia, the Magomedsharipov vs Kattar fight is broadcast live and exclusive on ESPN. You can watch it on TV if you have a Foxtel IQ or Fetch TV subscription or live stream the UFC event with Kayo Sports, Foxtel Now or UFC Fight Pass. Here's everything you need to know to tune in.

For all other UFC events see our how to watch UFC guide.

Kayo Sports offers coverage of over 50 sports from all over the world, including plenty of MMA action courtesy of ESPN. A Basic subscription costs only $25 a month and lets you watch on two screens at the same time, while a Premium subscription supports three simultaneous streams for $35 a month.

You can stream the event live but a replay of UFC Fight Night 163 will be available on demand on Kayo Sports as well. That way, you don't have to sacrifice sleep to enjoy the action. Given the late hour of the broadcast, you can tune in when it's more convenient to you.

Besides a generous library of content, Kayo Sports also comes with plenty of features that might catch your eye. You can watch up to four videos at once on the same screen with SplitView, hide scores with the No Spoiler setting, or explore figures and statistics with Interactive Stats.

For those short on time, Key Moments lets you jump right to the highlights in selected matchups, while Kayo Minis deliver all the good moments in 20 minutes or less shortly after an event has ended. Read our full Kayo Sports review for more information.

Kayo Sports is compatible with PCs/Macs, smartphones and tablets. Or, you can watch it on your TV via Apple TV, Android TV, Chromecast, and Telstra TV. Moreover, the service offers a 14-day free trial. In other words, you can stream the fight for free and check out some other content available while you're at it.

Foxtel IQ subscribers with the Sport channel pack can watch the fight live on TV or stream it to their laptop or mobile device with the Foxtel GO or WatchESPN apps. Both apps are free for all Foxtel subscribers with Sports.

You can get the Sports channel pack on top of the Entertainment base pack. Add the Foxtel HD experience into the mix and you'll be able to enjoy content in crisp 4K quality, courtesy of Foxtel's most advanced set-top box, the iQ4. Foxtel IQ deals are always available, so you might be able to score some discounts or save on fees when you sign up.

Alternatively, you can stream the Magomedsharipov vs Kattar event with Foxtel Now, which lets you watch Foxtel channels live via the Internet and enjoy content on demand. You will need the Sport channel pack, which costs $25 a month.

However, you also have to get the base Foxtel Plus pack to be able to add Sport to your subscription. Foxtel Plus costs $49 a month and offers a variety of Pop and Lifestyle channels.

You can access Foxtel Now on PCs/Macs and smartphones/tablets via the Foxtel GO app. The platform is also compatible with Sony Android TVs, Chromecast/Airplay, Telstra TV, PS4 and the Foxtel Now Box. New subscribers get a 10-day free trial.

ESPN is available on Fetch TV as part of the Vibe channel pack. The channel pack costs $6 a month. The total cost of your subscription will depend on whether you buy your Fetch box outright or get it through a broadband provider.

Dedicated UFC fans should consider getting a UFC Fight Pass, the official streaming platform that lets you access the entire world of fights. Monthly plans are $7.99 a month with a 7-day free trial.

Besides access to live events like UFC Fight Night 163, the service also lets you stream a generous library of on demand content. UFC Fight Pass is compatible with PCs and Macs, smartphones and tablets, Xbox One, Xbox 360, Apple TV, Chromecast, Roku, Samsung and LG Smart TVs.

Besides the Magomedsharipov vs Kattar bout and the heavyweight co-event, UFC Fight Night 163 is packed with bouts that have epic potential, featuring several local Russian players to watch. Here's the full fight card for the event.