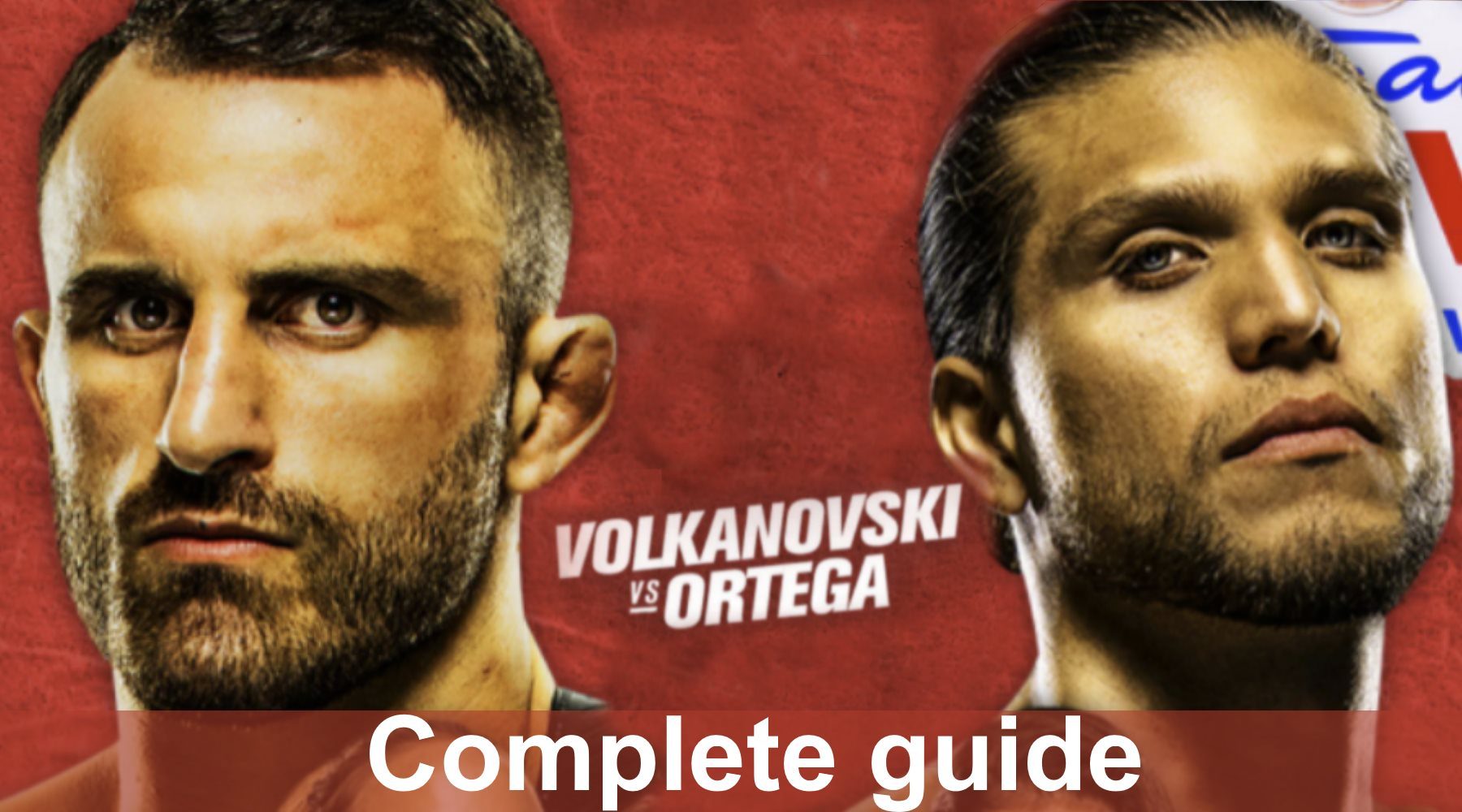 SUMMARY: You can watch the UFC 266 preliminary rounds for free on any device with Kayo Sports by using this 14-day trial. You can then purchase the main card through Main Event on Foxtel or Main Event on Kayo Sports.

Former rugby league player Alexander Volkanovski is one of the most complete fighters on the UFC roster. He will seek to defend his title for the second time and move to 10-0 in the Octagon when he takes on rejuvenated challenger Brian Ortega.

Volkanovski downed Max Holloway for the title in 2019 before beating him again to retain it. Ortega looks a new man with more powerful weapons and a more compact defence after returning from a long injury lay-off.

The women's flyweight title is also on the line in the co-main event of the evening, as reigning champion Valentina Shevchenko takes on streaking challenger "Lucky" Lauren Murphy.

When is UFC 266 Volkanovski vs Ortega?

UFC 266 is being held at T-Mobile Arena in Las Vegas, Nevada. The main card begins on Sunday 26 September at midday AEST, with the preliminary card beginning at 8am AEST. A link to the UFC schedule can be found here.

How to watch UFC 266 Volkanovski vs Ortega

There are a range of viewing options for UFC 266. ESPN is showing the preliminary card, while the main card is exclusive to PPV on Main Event. More details on this are below. You can see our complete guide to watching the UFC here.

Who is Alexander Volkanovski?

Volkanovski is a 32-year-old New South Welshman who played semi-professional rugby league and worked as a concreter before turning his attention to MMA at the age of 23. He holds an amazing 22-1 career record in mixed martial arts and is the current featherweight world champion.

How much is Alexander Volkanovski worth?

Volkanovski has earned over $1,224,500 in the UFC. He received a staggering $390,000 for the rematch against Max Holloway alone and will be set for a similarly impressive pay day this time around.

Who is Brian Ortega?

Ortega is a 30-year-old from California who is a black belt in Brazilian jiu-jitsu. He has a 15-1 record in MMA. Ortega lost a UFC featherweight championship battle with then-champion Holloway at UFC 226 in 2018. In 2020 he defeated the "Korean Zombie" Chan Sung Jung convincingly to set up this bout with the Australian.

Volkanovski claimed the featherweight title in 2019 with a win over Holloway by unanimous decision. He defended that title by again defeating Holloway in 2020, this time with a slightly controversial split decision. That title goes on the line again this weekend.

It is a crucial fight for the Australian with victory here elevating him to a level of brilliance and consistency among the finest fighters of recent times. For Ortega it is a chance to get the breakthrough victory he has looked destined to achieve for the past 3 years.

The event is being held at T-Mobile Arena in Las Vegas, Nevada. The venue holds 20,000 people. After a 1-year hiatus due to the COVID-19 pandemic, UFC returned to Vegas in July this year with UFC 264 drawing a capacity crowd for the third McGregor vs Poirier fight.

How to watch UFC 266 Volkanovski vs Ortega preliminary card

Kayo has more than 50 sports for you to choose from, including access to every single UFC Fight Night. You can get a Basic Subscription to Kayo for $25 a month which allows you to watch on 2 screens. For $35 a month a Premium subscription gives you 3 screens.

Kayo offers a 14-day free trial so you can see if it is right for you. It boasts a range of features and is compatible with iOS and Android devices, PCs, Mac, Android TV, Telstra TV, Apple TV, Samsung TV (2017 model or later), Chromecast and AirPlay. You can check out our full Kayo review for more information.

How to watch UFC 266 main card

When it comes to the 5-fight main card, Main Event on Foxtel, UFC Fight Pass, Fetch TV and PS4 and PS5 are the providers. You will need to purchase the fight to watch it live or catch a replay, unless you are heading to your local venue, depending on lockdowns where you are.

New, returning or existing Kayo Sports customers have an opportunity to secure this massive fight directly through Main Event. Using this link mainevent.kayosports.com.au, you can sign up and watch it through your usual Kayo platform.

All the information you need getting Main Event on Kayo can be found here. It also costs $54.95 and gives you full access to Kayo from 26–30 September.

If you have a Foxtel subscription, UFC 266 will set you back $54.95. You can place an order via the Main Event website, using the My Foxtel app, your Foxtel remote or over the phone. You can also order the fight if you have Optus TV featuring Foxtel, over the phone only. Ordering through a phone agent will incur an additional $2 booking fee.

How to watch Volkanovski vs Ortega with UFC Fight Pass

The UFC's official website is another option for watching the fight. It will cost you $54.95 through UFC Fight Pass. You can also sign up to Fight Pass for $10.99 a month or $104.99 for an annual pass.

If you have a PlayStation 4 or 5 console, look for Live Events in the PS Store. Once you have purchased the fight you can watch it through the "videos" menu. It is $54.95 or $49.95 for PlayStation Plus members.

How to watch UFC 266 with Fetch TV

Volkanovski vs Ortega will also cost you $54.95 with Fetch TV. Using your Fetch box, go to "manage" and then "subscriptions". Once you have made the purchase you can watch it on TV or your mobile with the Fetch app.

Who will win UFC 266 Volkanovski vs Ortega? 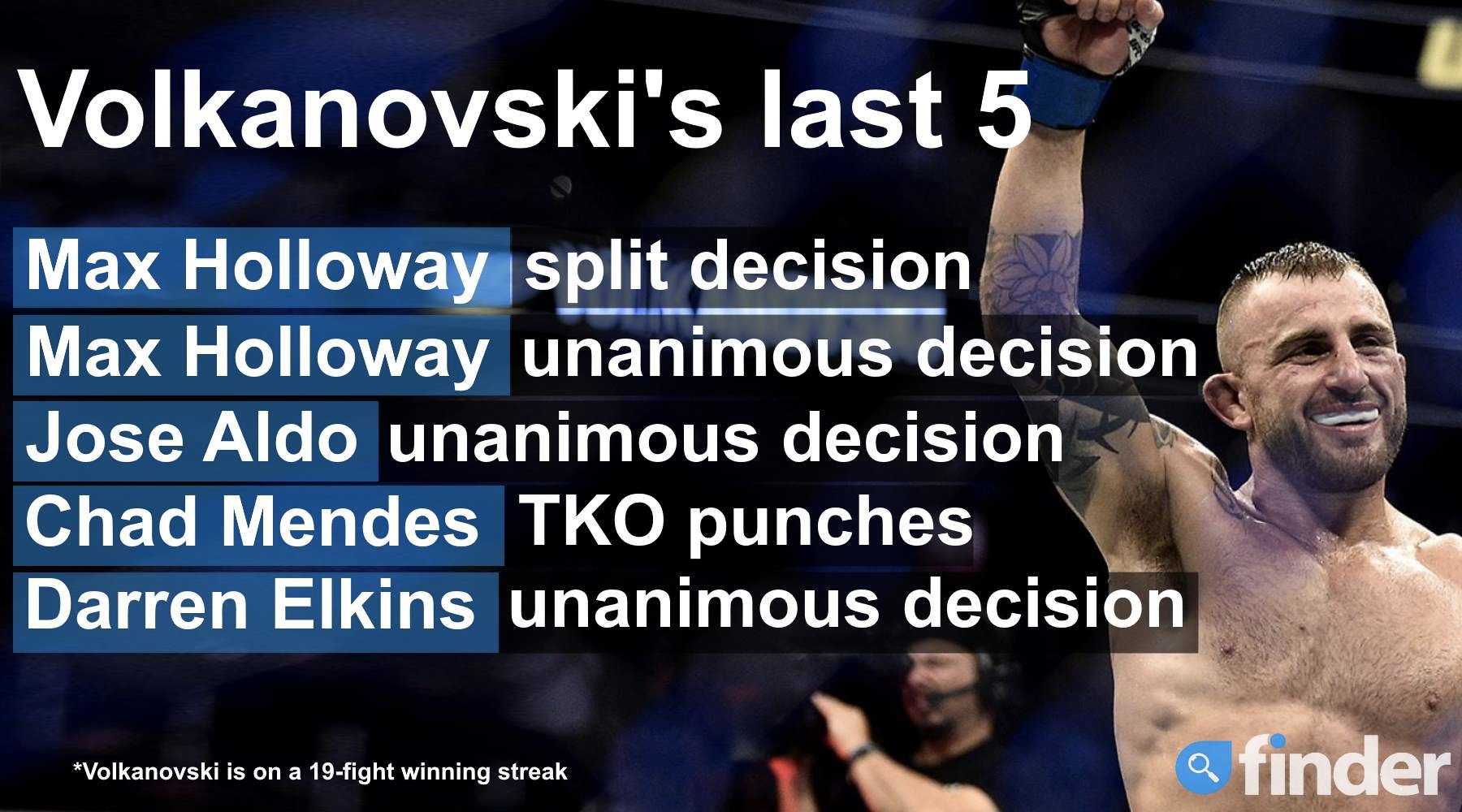 Volkanovski is looking to defend his title for the second time and enhance his already growing UFC legacy. He holds a commanding 22-1 record across his career having come to the sport relatively late.

Ortega is 15-1 with 1 no contest and is seeking a breakthrough title victory. This fight was originally scheduled for March but was postponed due to the pandemic.

Both men coached against each other in season 29 of The Ultimate Fighter and it got quite tense, which adds another layer to the fight. These are 2 highly skilled fighters at the top of their games but it's the Aussie who should prevail.