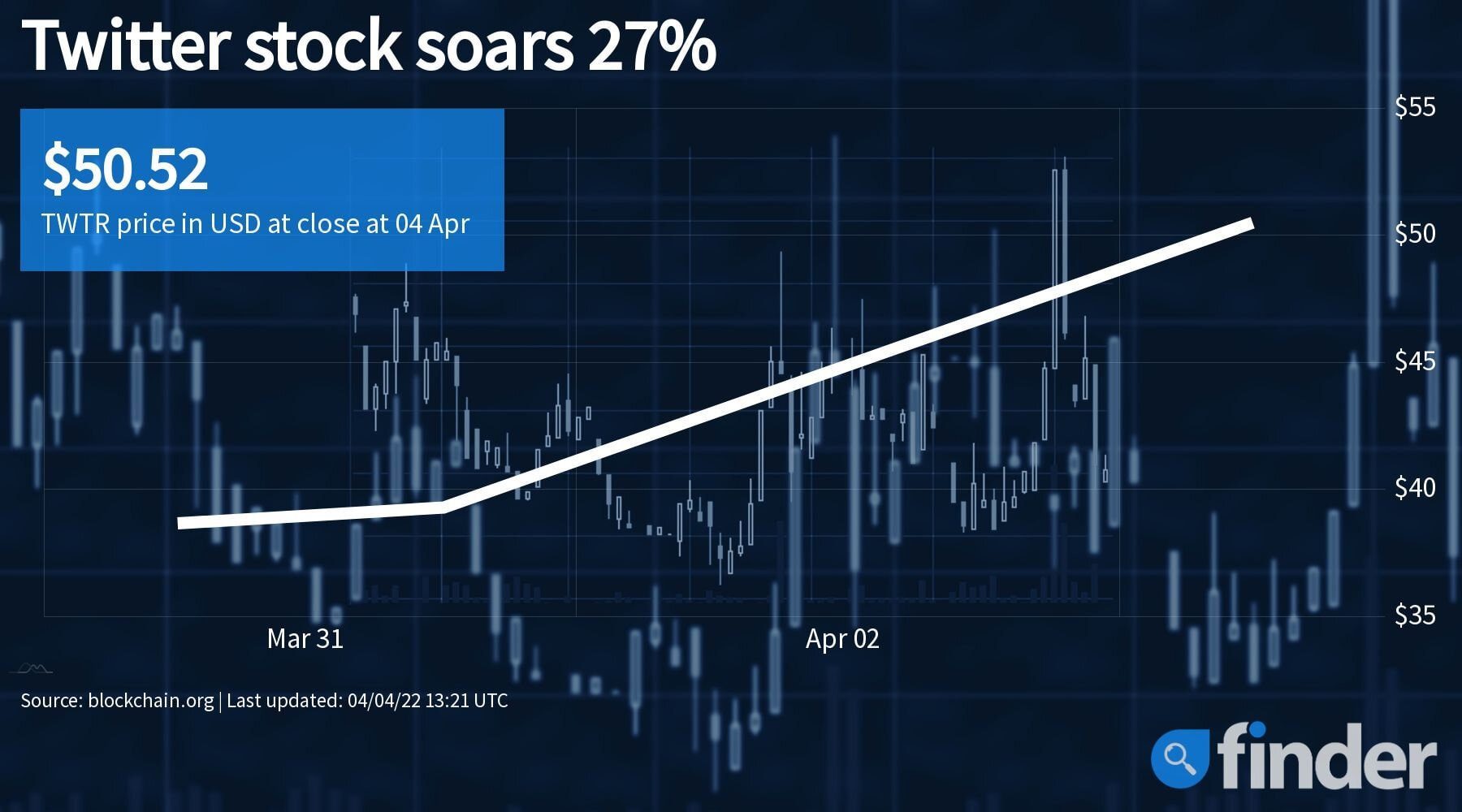 Elon Musk, a frequent Twitter critic, is now the largest shareholder. What's his motive and what should investors make of this news?

Shares of Twitter (TWTR) are surging Monday US time on news that Tesla (TSLA) CEO Elon Musk has taken a significant stake in the social media company.

The news comes about two weeks after Musk took to Twitter to question whether another social media platform is needed, causing many of his millions of followers to suggest he simply buy the giant.

A Securities and Exchange Commission (SEC) filing released Monday showed that Elon Musk now owns 73,486,938 shares in Twitter, which represents a 9.2% stake. The stake is worth US$2.89 billion, based on Twitter's closing price Friday.

That makes Musk the single largest shareholder in Twitter. His stake is more than four times that of Twitter founder Jack Dorsey, who, even though he's checked out of the company, still holds a roughly 2.26% interest, according to a 2021 proxy statement.

The stock purchase comes two weeks after Musk took to Twitter to criticize the social media platform over issues of free speech. That makes what role he plans to play in Twitter the big question.

"Given that Twitter serves as the de facto public town square, failing to adhere to free speech principles fundamentally undermines democracy," Musk tweeted. "What should be done?"

Musk followed up by asking, "Is a new platform needed?"

A Twitter user then asked Musk if he would consider such an undertaking, to which Musk responded, "Am giving serious thought to this."

But launching a new social media platform, particularly as an alternative to major existing platforms like Twitter, has proven difficult.

Former President Donald Trump finally launched his social media platform Truth Social last month. And even after months of delays, many users were forced onto a waitlist because the app wasn't capable of supporting the initial demand.

I signed up on February 22 to get a first-hand look at the app and have yet to gain access. Still, those who have gained access claim the app is plagued with glitches.

So is Musk planning a takeover of Twitter with a 9.2% stake? Wedbush analyst Dan Ives thinks that's precisely Musk's intention.

"Musk could try to take a more aggressive stance here on Twitter," Ives told Andrew Ross Sorkin Monday on CNBC's Squawk Box. "This eventually could lead to some sort of buyout."

"Musk is not going to do this just to take a passive stake. He's going to ultimately try to either really change Twitter in terms of more active speak or eventually could lead to a buyout," Ives said.

Former Twitter chief technology officer Parag Agrawal took over the reins of CEO in November 2021 after Dorsey stepped down.

In the tweet, Musk shared two images: one depicting Agrawal as former USSR leader Joseph Stalin and Dorsey as Nikolai Yezhov — Stalin's head of secret police — walking by the Moscow Canal. In the second image, Agrawal appears to have pushed Dorsey into the water.

Musk, a frequent user of Twitter, may be positioning himself to buy out the platform or, at least, implement a significant change to the way it operates.

So what does that mean for investors?

Well, the runup in Twitter's stock Monday is no surprise. The Musk bump is real. His tweets alone have the power to move markets.

Long term, though, investors may want to wait for any potential plans to emerge, in case the future of Musk's role in Twitter is purely speculative.

At the time of publication, Matt Miczulski owned shares of TSLA.