Troll and I review: Monstrously disappointing

Games like Troll and I don't come around all that often. That's probably a good thing.

From the moment you meet the titular Troll, it's clear Troll and I wants to tug at the same heartstrings pulled by the likes of The Last Guardian and Papa & Yo. You play as Otto, a young boy separated from his mother when an explosion rocks his small village, splitting the earth and unleashing waves of goblin-like creatures upon his people. Physically weak and vastly outnumbered, Otto's only hope of survival lies with the monster his mother had always told him to stay far, far away from: the fearsome troll. It's a promising premise, one that could make for a memorable adventure as Otto and Troll slowly learn to trust each other in the face of overwhelming odds. Unfortunately, Troll and I squanders all its potential thanks to its archaic design, a litany of technical problems, and a hollow story that gives you no reason to care whether Otto or Troll make it back to their homes in one piece.

From many perspectives, Troll and I feels like a game from the last generation, and sometimes even from the generation before that. Not only does it look rough, with blurry textures, janky animations and countless instances of objects clipping through each other, you can practically hear its joints creaking as you wrestle with its floaty and unresponsive controls. We lost track of the number of times we pressed the attack button only for Otto to freeze up, giving the enemy time to get a free shot in. Heck, even when the game deigned to acknowledge our input, the chances of an attack actually registering were no better than a coin flip, with Otto's weapon regularly passing straight through his foes without doing any damage.

Admittedly, Troll and I's combat wouldn't be anything to write home about even if it worked properly. Otto has just a single attack animation for all his weapons, with an ineffective dodge roll rounding out the entirety of his martial ability. Troll's not much better either, boasting a swing attack and a stomp that phase through enemies even more frequently than Otto's attacks. Coupled with the brainless enemy AI, combat ends up being little more than an exercise in button-mashing.

As seems to be mandatory in games these days, Troll and I includes a crafting system. Materials gathered from the environment can be combined to make new weapons, but given how poor the combat is and how quickly the weapons break, it's hardly worth the effort. In fact, the only reason crafting seems to exist is to gate your progress through the story, since you'll encounter glowing walls in the environment that only a specially-crafted tool can break through. There's no challenge here, though; the necessary materials are always conveniently close by, making the whole thing feel like pointless padding. Nor does this kind of progress-gating follow any sort of logic: why can Troll smash his way through some walls but not these ones, even though they look identical?

Inconsistencies like this crop up again and again in Troll and I. Otto has to climb a lot of cliffs throughout the game, leaping from one handhold to the next with all the pace and precision of a tranquilised sloth. Once you finally get to the top, the slippery controls make their comeback, frequently sending Otto tumbling off platforms and ledges to his swift death. Don't expect the camera to be of much assistance, either, as it's zoomed so close in to Otto's shoulder, you might as well be wearing horse blinkers. 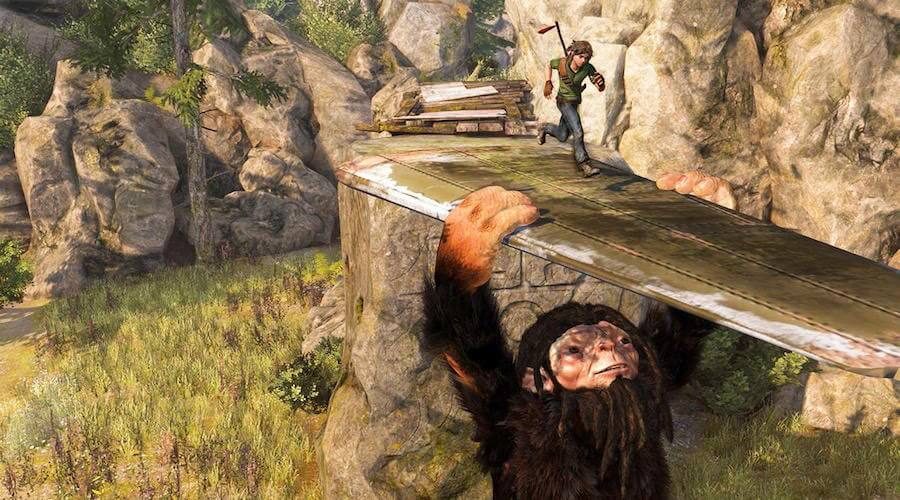 Speaking of death, you'll find it comes thick and fast in Troll and I, and that's not because it's a tough game. Combat is mindless, and the "puzzles" are so inane they barely warrant being called puzzles. Even so, Troll and I will happily kill you at the drop of a hat. If you're not sliding off a cliff or stepping into a trap you couldn't see because its fuzzy textures bled into the environment around it, you're copping an insta-kill spear to the chest from an enemy you couldn't even see. A stealth section midway through the game is especially obnoxious about this, bombarding you with blind corners and unavoidable ambushes you have no way of predicting in advance.

What makes these deaths so much worse than typical video game trial-and-error is how punishing Troll and I's checkpoint system is. There are no manual saves, and the autosaves are infrequent enough that each death can cost you half an hour of progress or more. Considering how easy it is to die through no fault of your own, any tension this might have fostered quickly dissolves into utter frustration.

Troll and I's problems aren't limited to its design. Even from a purely technical perspective, the game is a mess. The frame rate is all over the place, rarely remaining stable for long and often dropping down into a single-digit slideshow. Ambient audio seems to be missing from most of the game, causing enemy barks and other sound effects to sound painfully artificial against a backdrop of silence. When audio does play, it's frequently out of sync and occasionally out of sequence.

Invisible walls are another common frustration throughout the game, and we ended up stuck inside them on numerous occasions, forcing us to revert to the last checkpoint and lose yet more progress. We also encountered a number of peculiar glitches where the entire screen would flicker white for a brief moment, along with a single crash to the PS4 home screen.

As pervasive as all these problems are, Troll and I might have salvaged some scrap of enjoyment if it delivered on its narrative premise, but Otto and Troll's relationship is as undercooked as the rest of the game. Outside of a few stilted story sequences where one of the duo rescues the other, their cooperation feels perfunctory, the only sign that they care for each other coming from the hilariously bad game-over clip that plays when one of them dies. The Iron Giant this is most certainly not.

From every perspective, Troll and I is a disappointment. It looks, sounds and plays like a budget PS2 game, but even 15 years ago its flaws would have been obvious. This is one monster you should definitely avoid.

We reviewed Troll and I on PlayStation 4 with a copy provided by the publisher.

Brutally bland and horribly broken, Troll and I is a miserable experience from start to end. Had it been a budget game released two generations ago, it still would have been impossible to recommend, but as a full-priced game in 2017, our only advice is to stay far, far away from this abomination.