Trials Of The Blood Dragon Review: "Trials deserves better than this"

Trials of the Blood Dragon review: “Trials deserves better than this”

Ubisoft’s forced merger of Trials and Blood Dragon sounds like a crazy idea, but the end result is more of an insane mess.

Ubisoft surprised everyone when it announced at E3 that it had made a Trials/Blood Dragon mashup game, and that it was releasing it instantly. It’s a very E3-esque stunt, designed to generate headlines, especially given the bizarre disconnect between the precision bike action that Trials fans love and the sheer brazen comic insanity of Blood Dragon, the '80s-action-drenched spinoff from Far Cry.

Does Trials really need a plot?

Trials games have never really rested on plot before to speak of. The challenge has always involved you, the bike and just how good you could get at balancing it across tricky courses.

OK, Trials Fusion technically does have a plot, but it didn’t matter at all in any way. Trials was and is and should always be about the precise biking action, and learning the way that it approaches bike physics. Not quite realistic, but consistent and fair, so that when you failed, you knew why. More to the point, you were compelled to try again and again until those elusive platinum medals were all yours. 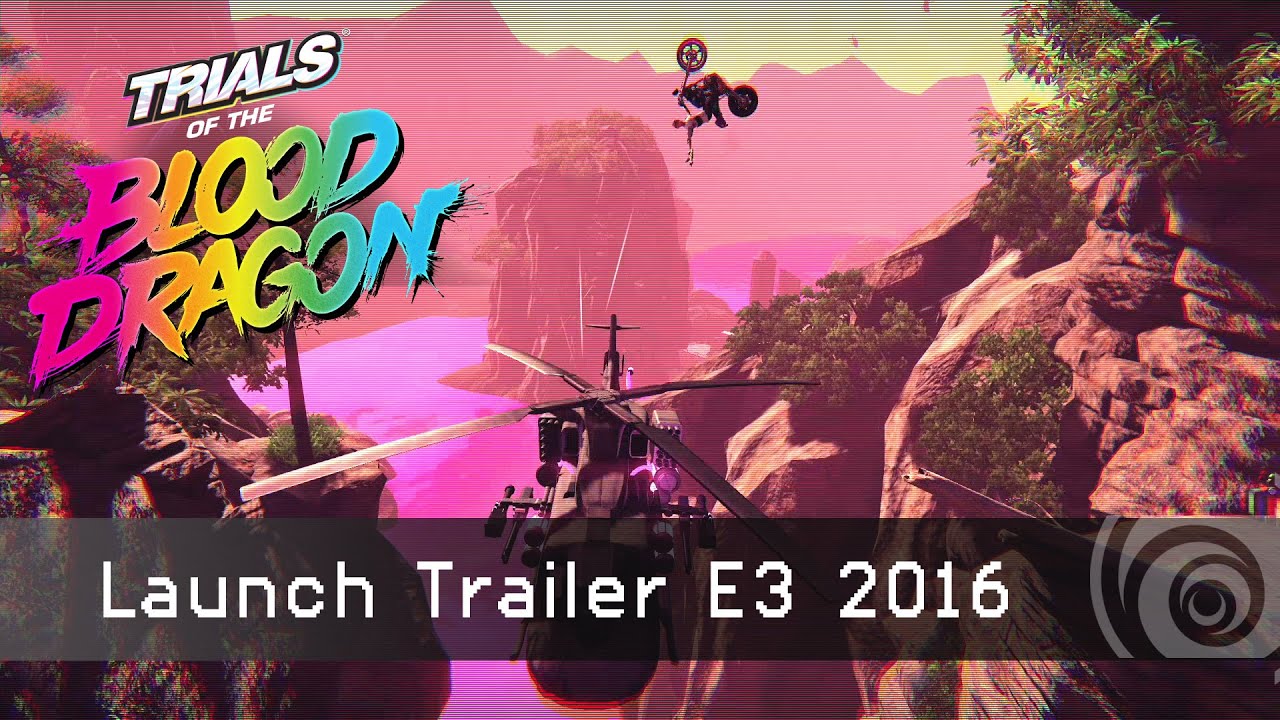 Trials Of The Blood Dragon has a plot, or to be more accurate, it has several. Not content with mashing up Blood Dragon and Trials, RedLynx has also picked a slew of action tropes, plots and memes and crammed them all together. Trials Of The Blood Dragon tells the story of Roxanne and Slayter Colt, the kids of original Blood Dragon protagonist Rex Power Colt, as they fight the fourth Vietnamese war (no, really) by way of everything from Indiana Jones to Power Rangers to Hotline Miami. If there’s a cheap action or gaming gag to be made, it’s probably been made, and then slathered with video of sharks with laser beam eyes along the way.

It’s something of a discordant mess that rests on the old Zucker Brothers idea that if one satirical joke doesn’t stick with you, another will be along in twenty seconds that you might just like. Some are clever, some are trite, but throughout you’ll be hammered by them repetitively, because Trials games encourage repetitively attempting levels for better scores and fewer failures. Very few jokes benefit from you hearing them fifty times. The gags in Trials of The Blood Dragon certainly don’t.

Nice bike, shame about the platforms

The biggest problem with Trials Of The Blood Dragon is that it really doesn’t know what it wants to be, beyond desperately, achingly needing more polish.

The straight Trials-esque sections are fair enough, but then after so many Trials games, they absolutely should be. The inclusion of a gun to your arsenal doesn’t change the experience all that much, and not that much that’s either clever or well-orchestrated is built into the straight vehicle sections. Trials masters won’t find too much that’s challenging here. If all you want to do is burn through the plot, the fact that you can continue endlessly will mean that you’ll make it through the vehicle sections eventually anyway. The Blood Dragon-inspired sections are another story altogether. You could be forgiven for thinking that a mashup of Blood Dragon and Trials would involve hopping off the bike for some first person shooter action. Instead, RedLynx opted to use the Trials engine to make a floaty, irritatingly imprecise side scrolling platform game.

Presumably the idea was to make it challenging so that you’d be compelled to play through for ideal scores, same as any Trials game. That only works when you can identify the cause of failure as your own skill, but instead the platform sections just have bad controls, deathtraps you can’t spot until they’ve killed you at least once and the worst AI seen in enemies since the days of the Vic 20. It’s a challenge to get through the platform sections to be sure, but that’s due to sloppy design and the sheer awful grind of these sections. Even Blood Dragon fans looking for some fun explosive shooting action will be left unimpressed by the weak pea shooters you’re given to dispatch your foes. You know those games that you’ve never previously heard of that always seem to sneak into the "free" lists of monthly Games With Gold or PS Plus subscriptions? The platform sections of Trials Of The Blood Dragon are like the worst of those you’ve ever played. To make matters worse, they represent the majority of the game, so you’re essentially forced to play through them to make it to the bike sections you’re likely to enjoy. Several hybrid levels feature both bike and platform action, so if you do want the highest scores, you’re going to have to endure their abject mediocrity (and I’m being kind calling them just mediocre) many times. Blood Dragon was never that serious to begin with, and was a spinoff of an existing franchise anyway. Ubisoft hasn’t done too much to Blood Dragon that, frankly, it wouldn’t do to itself.

Trials, though, has a passionate community, and it’s one that deserves better than this. If you’re utterly desperate for new Trials levels, you’d be better off building some tracks yourself, or hitting the community up for some, because while there is some limited fun to be had with Trials Of The Blood Dragon, it’s almost entirely undone by how poor the non-bike sections of the game actually are. Trials Of The Blood Dragon isn’t terribly expensive at around $20 for PlayStation 4, Xbox One and Windows PC, but even at that price it’s not good value.

We reviewed Trials Of The Blood Dragon on PlayStation 4 with a copy provided by the publisher. 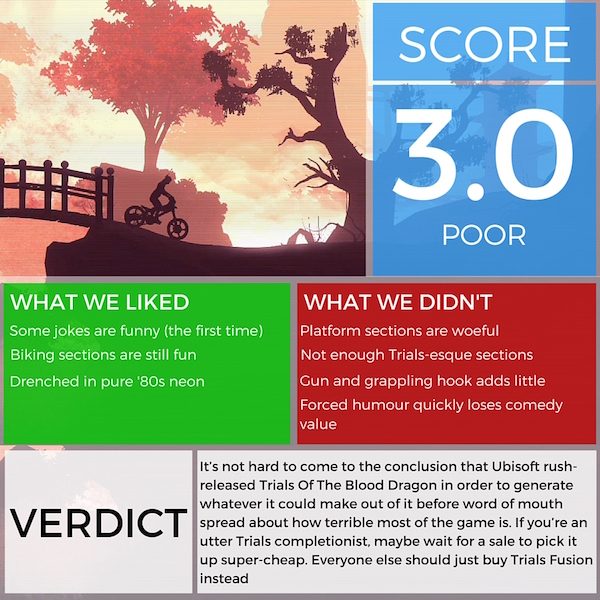