Compare travel money options for Colombia to save money on bank fees and charges while you're there.

Are you heading to Colombia? You can compare a range of different travel money products in this guide to help you manage your money while you're in Colombia and save on fees. We outline the pros and cons of using prepaid cards, debit cards, credit cards and foreign cash in Colombia so you can find the right travel money solution for your trip.

Jump to a section in this article

How much Colombian Peso do I need to bring?

*Exchange rates are accurate as of 4 September 2017

What is the best way to take money to Colombia?

Rich in natural beauty, Colombia has a lot to offer. The armed conflict which has characterised the nation has all but ended and a new Colombia is opening its doors to the world. Desert, jungle, tropical beaches and bustling metropolises attract an increasing number of tourists every year.

If you’re planning a trip to Colombia, it pays to do your research before you leave. Colombian Pesos (COP) are the currency of the Republic of Colombia and the only currency accepted in Colombian towns and cities. Credit, debit and travel money cards are accepted in fewer places than Australia and ATMs are expensive to use, so compare travel money options and apply for the product that’s going to let you withdraw cash for less.

Travel money options for Colombia at a glance

This table is a general summary of the travel money products in the market. Features and benefits can vary between cards.

Make your money go further in Colombia by using a credit card with no currency conversion fee. There are credit cards that also waive the international ATM fee; however, you shouldn’t use a credit card to make a cash withdrawal. Period. Cash advance fees, interest charges, ATM charges and foreign currency conversion charges all apply when you withdraw cash on credit. Some Bankwest credit cards waive the international ATM withdrawal fee, but even without this fee ATM withdrawals on credit are still the most expensive way to get cash from an ATM. As a general rule, credit cards should only be used for over-the-counter purchases.
Credit card transactions work a little differently in Colombia:

Compare transaction accounts based on their currency conversion fee and international ATM withdrawal fees. These fees are the major charges you’ll incur using your debit card in Colombia. There are transaction account providers that waive international ATM withdrawal fees, some providers even forgo the currency conversion fee as well.

Generally, prepaid travel cards are a good way to access your own money overseas by loading Australian dollars on the card and transferring it to whichever of the multiple supported currencies is best suited to you. However, there are some restrictions to use travel cards in Colombia, including:

In the big cities such as Bogota, Medellin (pronounced Med-e-jin), Cali, Ibague, Cartagena, Barranquilla and so on, ATMs and banks are everywhere. In fact, you’ll find that the level of service and the state of the facilities is as good, if not better, than what’s offered at home. Just watch out for the line-up inside the bank if you need the services of a teller during business hours — queues can get a little intense.

Note the following about using an ATM in Colombia.

An expat in Medellin 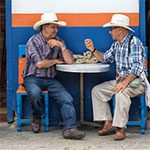 David took an English teaching position in Medellin, Colombia’s second largest city. Before he started work, he spent a month travelling around Antioquia (Medellin is the capital of Antioquia). David based himself in Medellin and travelled by bus to the popular tourist spots: Laguna de Guatape, Santa Fe and Turbo.

Which cards did you take with you?
David says he took the Citibank Plus Transaction Account and the 28 Degrees Platinum Mastercard to Colombia. As part of his contract, he was issued a debit card with Bancolombia. However, he used the Citibank and GE Money credit card in the month before he started work.

Why did you take these cards?
He says the Citibank gave him the following benefits: no currency conversion fee on ATM withdrawals and over the counter purchases. The 28 Degrees Platinum Mastercard also charged no currency conversion fee. Neither card charges an account keeping fee, so they cost him nothing to keep once he started work and used his Bancolombia debit card.

Where could you use your cards?
David says he used his Citibank card at ATMs and he never had a problem with acceptance. He also used this card to buy food from Exito, which is like the Woolworths or Big W of Colombia, at restaurants, fashion retailers when he purchased a new pair of shoes and to buy tickets when we went to the cinema. He says he never had a problem using his card inside a shopping centre. When he bought beers from the local corner shop, he had to pay cash. He also had to pay cash when he purchased his bus ticket to Laguna de Guatape, Santa Fe and Turbo. The tickets were $10 - $30 for each journey.

What about ATM withdrawals?
He used his Citibank Visa card to withdraw from ATMs. He paid the operator fee of a couple of dollars each time he made a withdrawal and was pulling out about $200 per transaction. He stuck to ATMs attached to banks and never had a problem.

What’s your travel money recommendation?
David speaks highly about the Citibank Plus. He says this is the standout debit product for any overseas trip, he also says it works pretty well in Australia too, he could make free ATM withdrawals at Citibank and Westpac Group ATMs.

A guide to Colombian pesos Find cash and ATM's in Colombia

COP is the national currency of the Republic of Colombia. Colombian pesos are not the same as Mexican pesos. COP can be a volatile currency. Exchange rates may change marginally during your trip. For example in 2015, the value of Australian currency has grown from a low of 1,800 pesos per Australian dollar to a high of 2,300 pesos. An average priced meal is 5,000 - 10,000COP and a soft drinks and cervezas (beers) are approx. 2,000 - 3,000COP each.

There is no shortage of foreign exchange offices in Colombia. You can get your money changed at a bank or at a dedicated money changer. Banks are everywhere and money changers can usually be found in a shopping centre: Centro Commercial and Multicentro are similar to our Westfield shopping centres and can be found in all Colombian capital cities. These exchange offices exchange most international currencies including Australian and United States Dollars for a good rate.

Don’t be a papaya!

Avoid being an easy target for thieves by showing some common sense and keeping your valuables on hand at all times.

Colombia is safer than the prevailing international sentiment would have you believe. The civil war is all but finished and the dark days of Colombia’s history are just that: history.

Find cheap travel insurance options for your next trip to Colombia

Jonathan Choi was a training and development manager at Finder.