Toyota has popped the bonnet on its highly anticipated 2022 Toyota LandCruiser 300 series 4WD, including new GT Sport and Sahara ZX variants. Here's everything you need to know.

OnlineAuto.com.au
With its "bulk buying power", OnlineAuto.com.au can help you buy the car you want and potentially save you money too.
Eligibility criteria, terms and conditions apply.
Chris Stead
Fact checked

To say the Toyota LandCruiser 300 is anticipated would be an understatement. An icon of the Australian 4WD landscape, it's one of the nation's most popular automotive brands. From tradies to families, grey nomads to off-road explorers, everyone has been waiting… and waiting… and waiting for the next evolution of the LandCruiser. 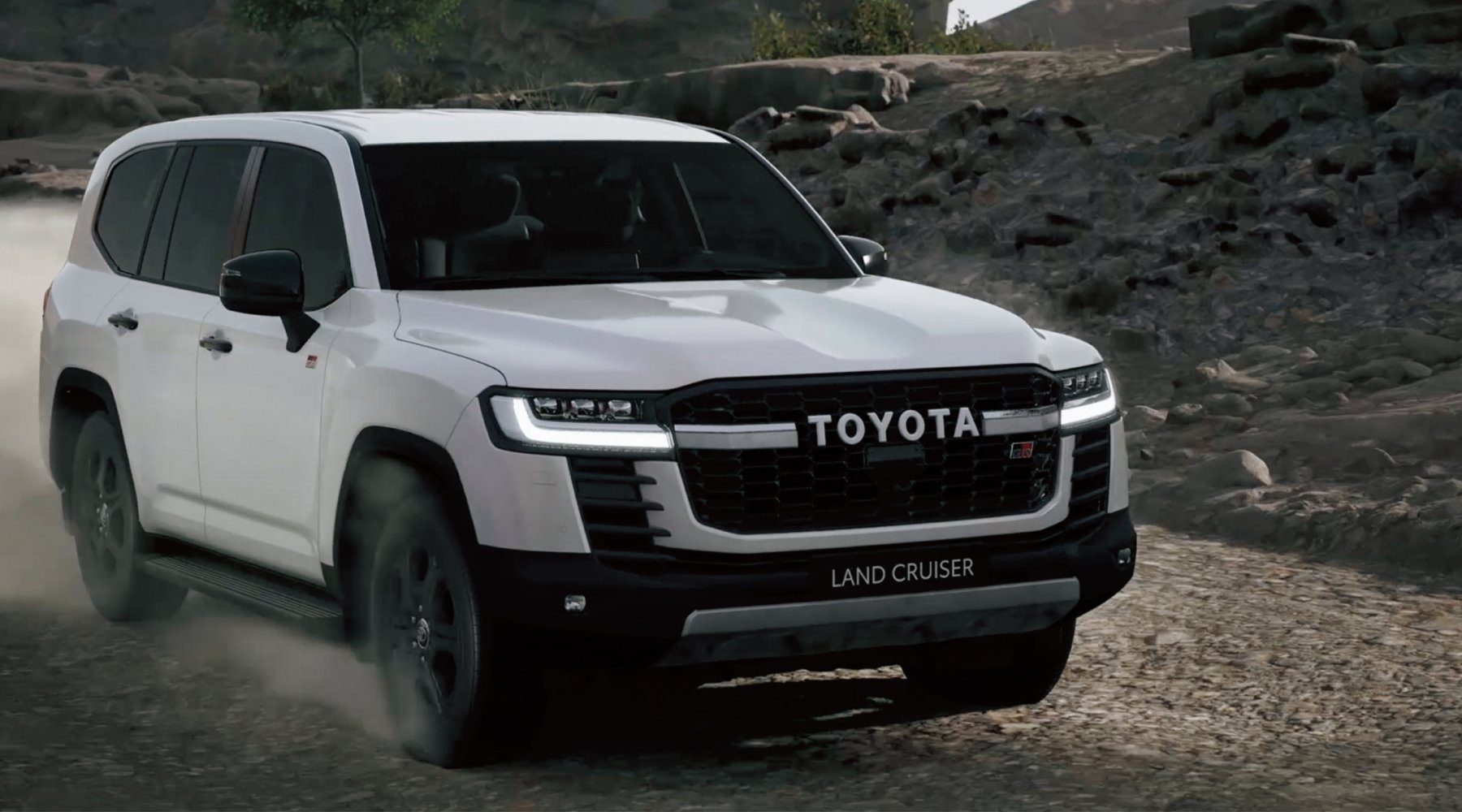 When will the LandCruiser 300 series be out in Australia?

Toyota stopped short of announcing a specific release date for the Toyota LandCruiser 300 series, but confirmed it will arrive in 2021.

The model has already launched in the United Arab Emirates and Kuwait. But Australia is a priority market given its relatively high sales. In 2020, Australians bought almost five times as many LandCruisers as the Americans, and sales have been up 60% on last year's numbers in 2021. Australia is in the world's top 3 LandCruiser markets.

How much will the LandCruiser 300 series cost in Australia?

Shortly after the initial announcement, Toyota confirmed with Finder the models that will be available when the LandCruiser 300 goes on sale. It will include the base family of models we've become accustomed to, but there will also be two new variants. I will go into these in more detail, but they add some exciting competition at the higher end of the range.

The confirmed LandCruiser 300 models and their driveaway prices are:

The initial footage also showed a 3.5L petrol variant as well as the signature 3.3L diesel model, but it's unclear if both options will come to Australia and if so, in which models. It's heavily rumoured that a petrol-electric hybrid will appear at some stage, although there was no mention of it during the initial reveal. Toyota has committed to having an electric version of each of its cars by 2030. So while a hybrid is expected, it may not come in the initial year. 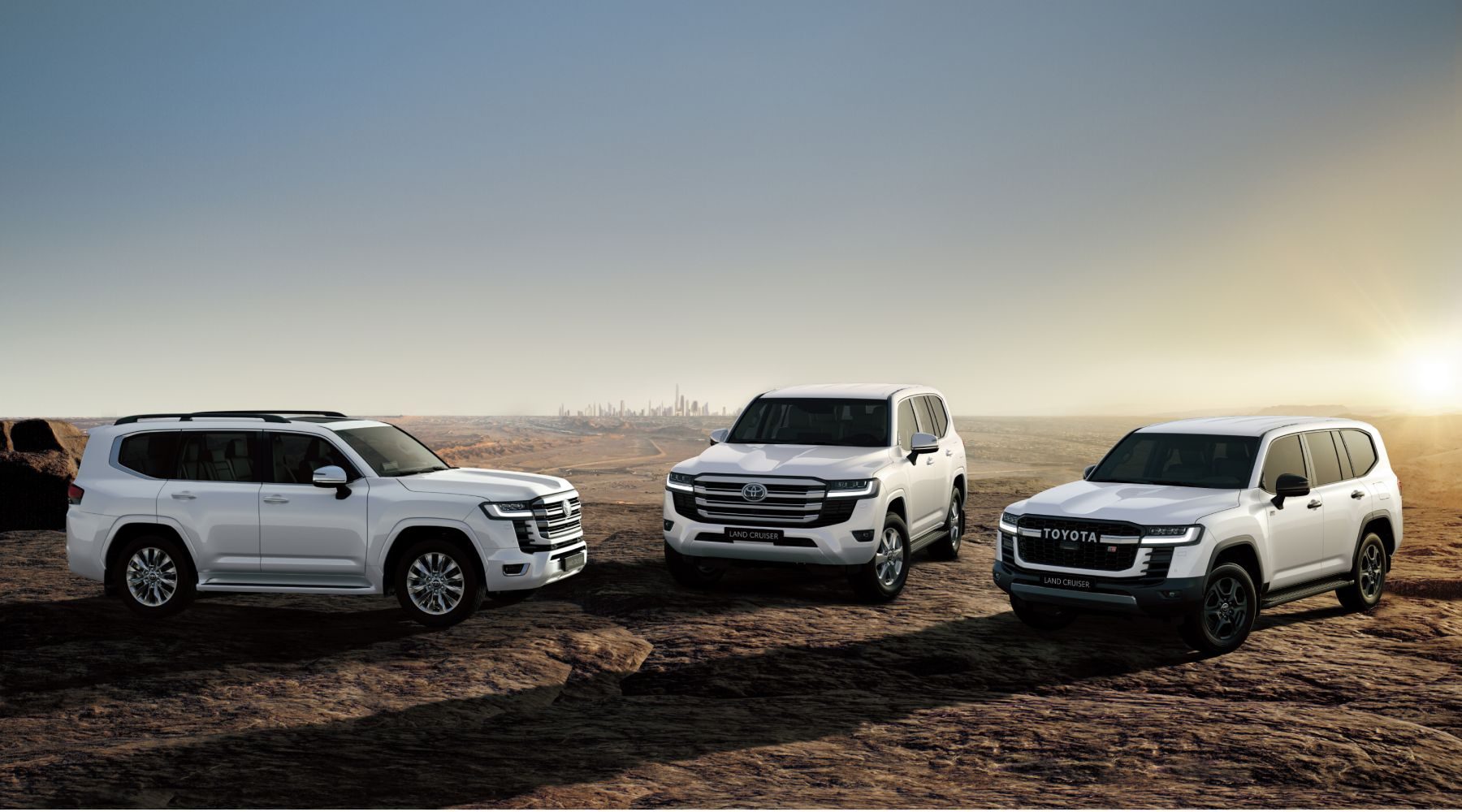 It was heavily rumoured prior to the announcement, and it has now officially materialised. The LandCruiser 300 GT Sport sits at the pinnacle of the range, dressed for hardcore 4WD success. Indeed, it was developed for the Dakar Rally. The exciting model takes its lead from the motorsport-inspired GR vehicles in Toyota's range. GR standing for GAZOO Racing - the company's motorsport brand, a badge worn by cars such as the Supra. But then it extrapolates on that with the highest end in off-road kit.

One thing that is important to note, is that the GR Sport is only a five-seater. A significant dip down from the eight-seats previous LandCruiser generations have been known for. On the positive side, these are some of the key features announced for the GR Sport: 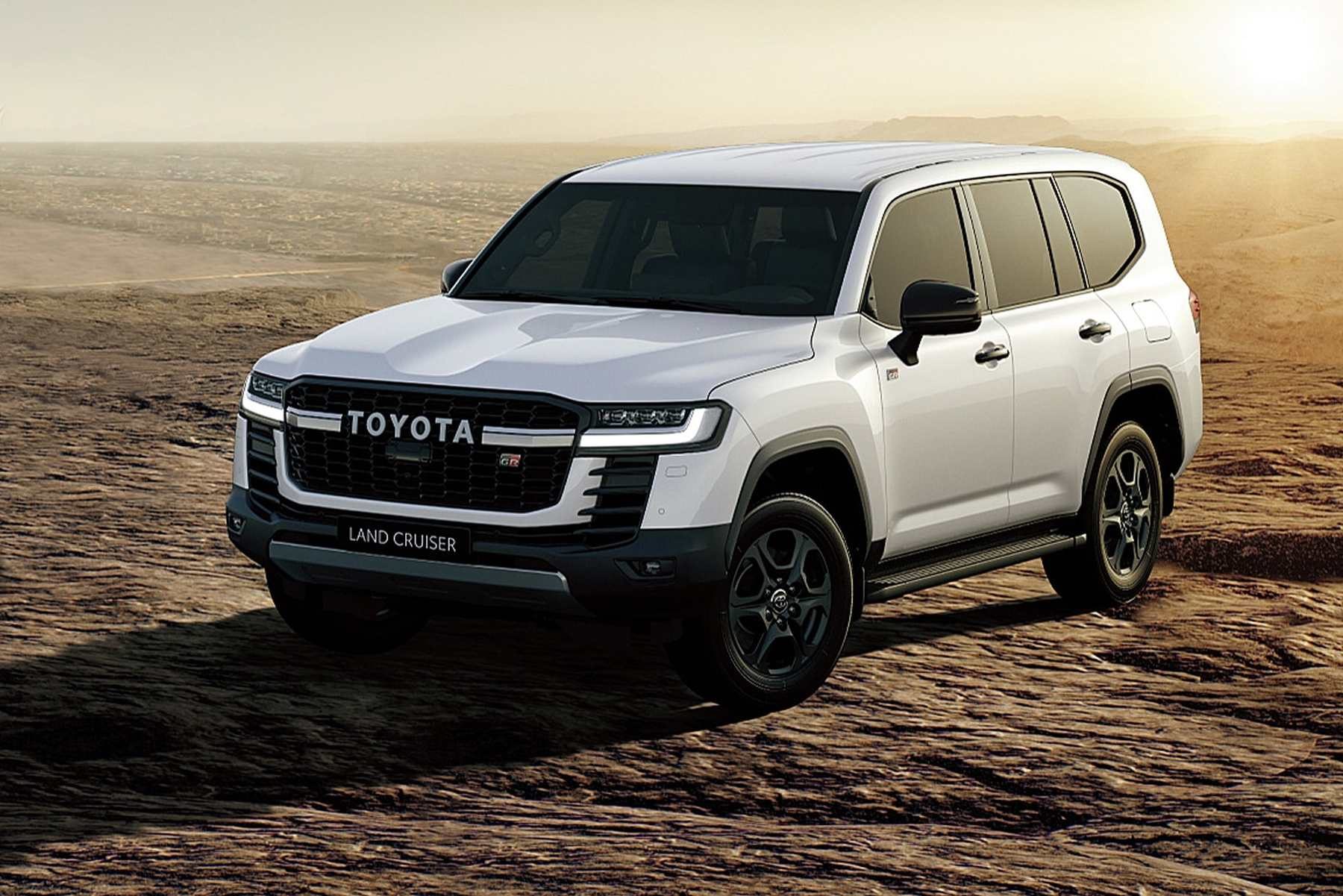 Effectively the same price (it's $1000 more), the Sahara ZX is the other top-end model on offer. Instead of focusing on being a hardcore off-road vehicle, however, the Sahara aims to be a luxury vehicle. It's best suited to owners who acknowledge that most of their driving will be urban, broken up by intermittent family holidays. It will also be a five-seater, however, which is a bit of a head-scratcher given the target demographic: families. Here are the other highlighted features of the Sahara ZX

What engine is in the new LandCruiser 300 series?

The 3.3L V6 twin turbo-diesel is perhaps the most notable change over the older 200 series LandCruiser. Gone is the 4.5-litre V8 turbo-diesel engine of yesteryear, and while this may at first feel like a downgrade, it's not.

By adopting a turbocharger design more often seen in European V6s, using a system Toyota has dubbed Hot Vee, the engine handles exhaust gases more efficiently. It can also dynamically shift between its use of one or both turbochargers depending on engine demand. So, where the 200 series engine offered 200kW of power and 650Nm of torque, the new 3.3L V6 twin turbo diesel can deliver 227kW and 700Nm.

It's also a smaller engine. This not only helps to bring down the overall weight of the car by 100kg compared to its predecessor, but allows the entire engine block to sit deeper into the chassis. This provides improved balance and a lower centre of gravity. See the below video for more details. 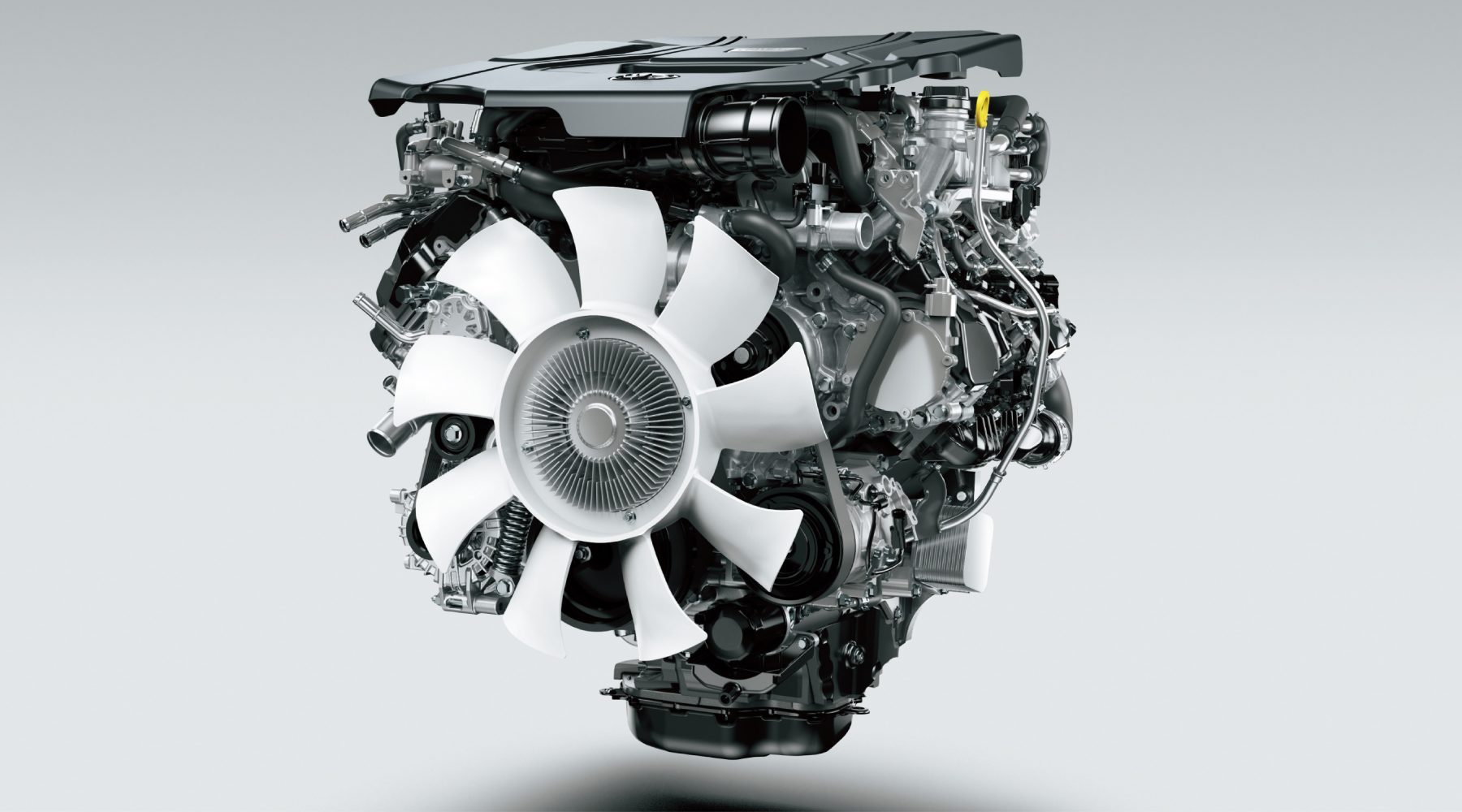 It's unclear yet what this new engine will do for fuel consumption, but if you ever tried towing a caravan around Australia with one of the older V8 LandCruisers, you'll know it's an area that definitely needed review. All Toyota is saying at present is that the LandCruiser 300 "achieves noticeably lower fuel consumption and emissions".

Certainly, having a lighter, smaller V6 engine should drive a fuel efficiency improvement, but there have been other changes as well, designed to make the LandCruiser less of a petrol guzzler without impacting its raw power. The old 6-speed sequential shift gearbox is gone and replaced with a 10-speed direct shift design. This provides better torque control in low gear (for acceleration) and high gear (for highway cruising at low revs) with shorter shifts in between. You'll find more information in the video below.

A new fuel injection system also targets improved fuel consumption, as does the new electric fan, which only turns on when needed. (This should also reduce start-up noise.)

As of the time of writing, the only images released of the LandCruiser 300 series are categorised as "overseas pre-production" which are the images you see on this page. However, we're sure they're indicative of what we can expect here in Australia.

So, with that in mind, we hope you like your cars looking boxy and American, because this car is basically in stars and stripes.

It's a step back in my opinion, but it's still a mean looking machine. Toyota also confirmed that the length, width, wheelbase, and departure and approach angles will match the 200 series. 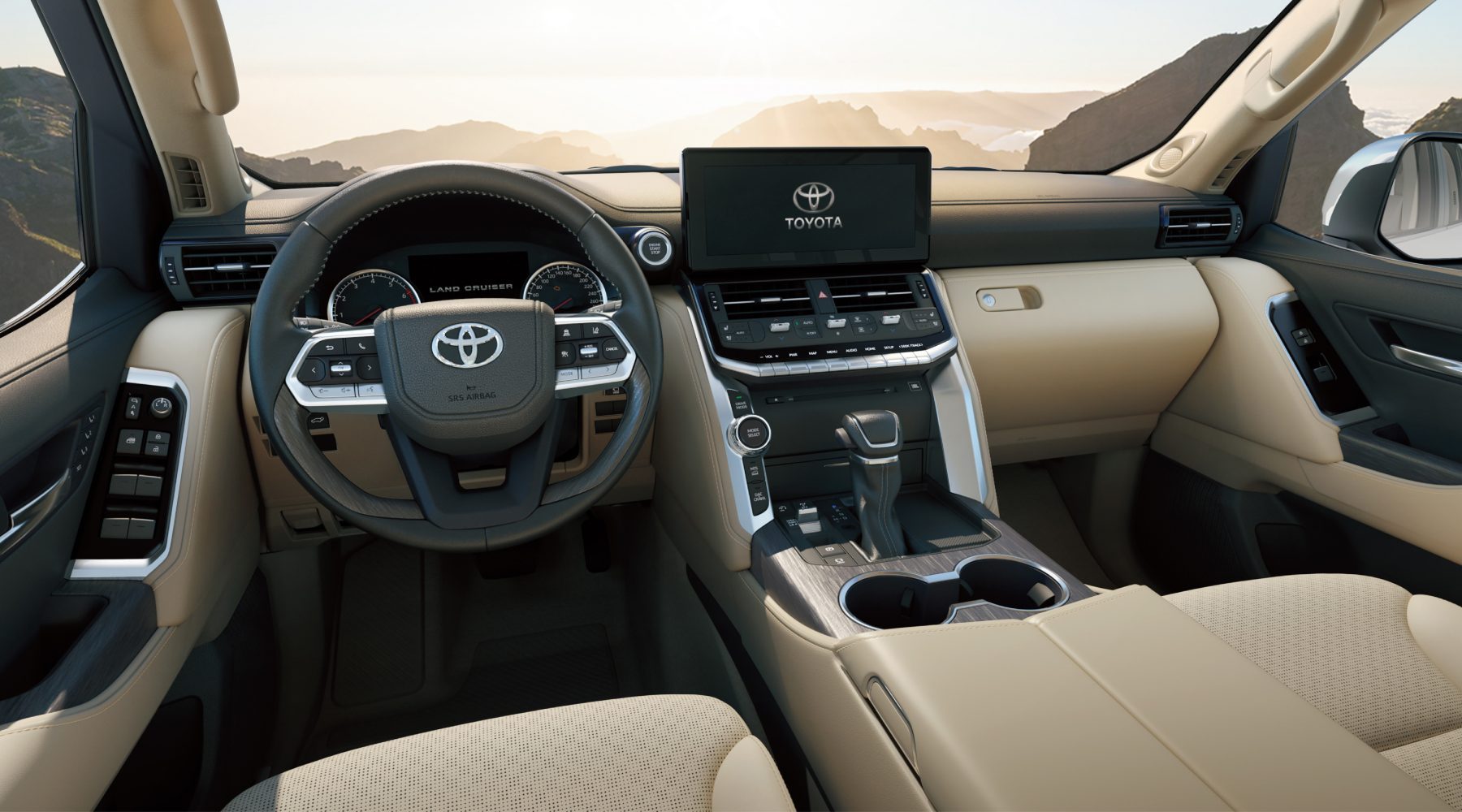 The video below gives you a good glimpse of the insight entertainment unit, dash and upholstery. And it looks mint.

Interestingly, the back seats won't fold to the side as LandCruiser owners have become accustomed to. Instead, they will fold into the floor, similar to what we see with the Kluger. This means Australians will get a 7-seat variant instead of the traditional 8-seater, which is a bit of a disappointment for large families.

As for its off-road-ness (not a word, but you get the idea), some key details have emerged. We know that the engine is water sealed up to a depth of 700mm, and that the oil pan and sump can handle sustained inclines or declines of 45 degrees without being compromised. It can still tow 3.5 tonnes as well, braked of course.

A new suspension system combines with a next-generation e-KDSS (Electronic Kinetic Dynamic Suspension System) sway bar to deliver an additional 30mm of flexibility when getting over bumpy terrain. The TNGA-F platform is being used to keep all these off-road features tethered to a rigid chassis.

There's a video dedicated to its off-road-ness below.