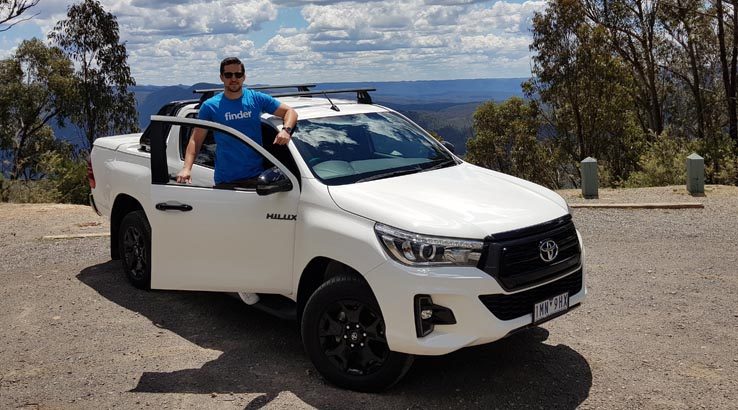 We put the luxury version of Toyota’s sales-topping HiLux to the test.

Toyota’s HiLux typically brings to mind construction sites or mud-splattered tyres. However, the introduction of the HiLux Rogue, Toyota’s lifestyle-focused offering, might be enough to change that.

Priced at $61,690, the Rogue is based on the top-of-the-line SR5 and aims to combine smart looks with rugged off-road capability. How does the Rogue stack up?

The Rogue has the same engine as the SR5 below it. On paper, the HiLux engine is slightly underpowered within its class, with the 2.8-litre turbo-diesel pumping out around 130kW and 450nm of torque. However, after driving around Sydney and out as far as Wombeyan Caves (around a three-hour drive) we found the engine to be surprisingly punchy and fairly responsive when putting the foot down.

3,200kg braked towing capacity means that even with the turbo-diesel engine producing slightly less power than its rivals, it is still competitive should you need to hitch up a caravan (the tow bar comes standard on the Rogue).

Over the course of our time with the Rogue which incorporated city and highway driving, we were seeing 10.3L/100kms, which isn’t too far from the average tested numbers of its competitors. The fuel tank in the Rogue, like all HiLux models is 80 litres in capacity.

The Rogue received a new grille with a honeycomb insert as well as LED fog lamps which have an upgraded bezel finished in gloss. The new luxury look also includes black 18-inch alloy wheels. Toyota says this helps to give it a more imposing road presence and aggressive aesthetic.

I can’t argue with that. The Rogue is one of the better-looking 4x4 utes on the road. That said, HiLux devotees don't have any grounds for complaints. The changes haven’t taken away from the classic look recent models have featured.

The hard tonneau and sports bar help to give the car a polished, classy look that also retains toughness and practicality. The sports bar can handle a vertical load of up to 75kg and the hard tonneau means that mates and colleagues won’t be able to steal your trusty Makita.

The tub is carpeted as well, which might make you reconsider putting things in the back, but it is UV-resistant and waterproof, making it easy to clean and maintain and most of all, durable.

Being Australia's bestselling car, I was keen to get it on the road. Collecting the keys and hitting the M5, we headed out as far as Wombeyan Caves, driving the car over both sealed and unsealed roads.

On sealed roads, we found the ride to be slightly harsh. While the M5 isn’t the best road out there, we did feel most of the bumps and potholes that it has to offer. That said, it wasn’t actually uncomfortable.

Another thing we noticed while crawling through the traffic park that is peak hour on the M5 is that the cabin is a pretty nice place to be. A combination of dark, leather-look hard plastics with leather at various touch points as well as the seats, gave the sense of both luxury and durability.

The HiLux Rogue has a nice driving position where you can see a few cars ahead of you but doesn’t feel like you’re sitting in a Mack truck. There should be few reasons to stop you manoeuvering the car around the city, with light steering and a reversing camera.

Tradies love a prank and switching on the passenger's seat warmer is a popular choice. It was fairly warm when I picked it up and my passenger will confirm the warmers definitely work.

There is storage in both the front and back doors and with my driving position (I'm slightly over six-feet tall) there was enough room for me in the back. I wasn’t able to stretch out, but sitting back there for a while wouldn’t be unbearable.

On unsealed roads, the HiLux handles surprisingly well. I was sceptical after driving the Rogue on road, but it is a feather in the cap of Toyota and its local testing. The car didn’t lose its way and felt fairly composed.

Unfortunately, we didn’t have a chance to put the Rogue through some off-road terrain, but given the history of the HiLux and what I experienced driving it, I am sure that it would be up to the challenge and I'm keen to get behind the wheel again.

While the Rogue doesn’t feature Android Auto or Apple Carplay, I found the infotainment system to be fairly straightforward and easy to use. Pairing the phone was a breeze and using the navigation system wasn’t a headache either.

Notably, the Rogue doesn’t have much in the way of driver assist technology, apart from ABS, traction and stability control, yet has still managed to score a 5-star ANCAP rating. This is a testament to the engineering behind the vehicle, but I am hoping driver assist will be included in the next iteration. The vehicle is also fitted with seven airbags to keep driver and passengers safe.

For those looking to tow a jet ski, boat or anything else, the Rogue has trailer sway control included as standard, though we didn’t get a chance to see how effective this is.

HiLux people will always be HiLux people and if you are after something with a bit more style for the work site or city, then the Rogue is the HiLux you want. It is capable around the city, composed on unsealed roads and looks great in both situations.

Compare the HiLux against other 4x4 utes

Pricewise it may seem a bit steep, but the “unbreakable” aspect of the HiLux platform is something to keep in mind: it is a vehicle that will last you for some time.