Thinking about buying a ute? You could do a lot worse than getting a HiLux

The Toyota HiLux is an all-rounder ute that's supposedly as tough as nails. There are models specifically for tradies or higher-end dual-cabs that will handle the commute and adventurous weekend trips.

Here's all you need to know about Australia's best-selling car model overall. There are six trim levels, varying from the utilitarian Workmate up to the fully-equipped Rugged X. You can buy the HiLux with a choice of three engines. For the farm hack/tradie spec Workmate, you get a choice of a 2.7-litre petrol (with a five-speed manual gearbox) or a 2.4-litre turbo-diesel with either a six-speed manual or automatic. The rest of the range is sold with a more powerful 2.8-litre oiler and the same auto or manual choice. There's also the option to pick between 2WD and 4WD plus Hi or Lo riding.

Body styles include a single cab, double-cab or extra cab – all as either a cab-chassis model or pick-up variant.

Confused by all the different trims? Here's a brief intro to each spec. 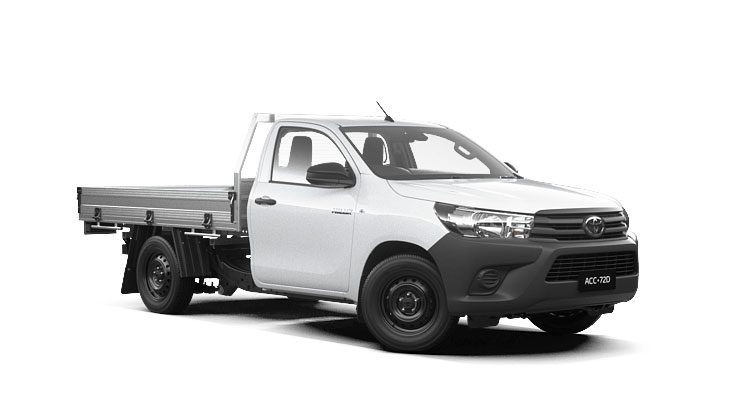 This is the cheapest HiLux, one that is ideal for those who need a simple and hard-wearing work truck. It comes with A/C, power windows, a 6.1-inch touchscreen, seven airbags, 16-inch steel wheels (or 17-inch on the 4x2 Hi-Rider and 4x4 Workmate). Also, a standard inclusion is Toyota Safety Sense, which includes the following:

For a starting drive-away price of $27,847, that's quite a lot of stuff for your money. That price is for NSW postcode 2000, for a single-cab cab-chassis WorkMate. 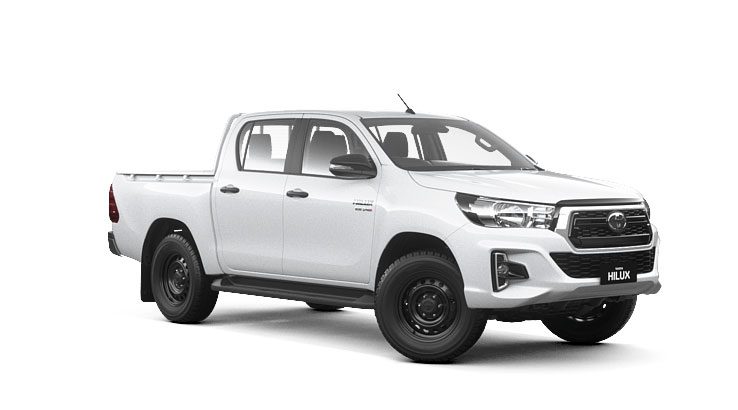 The SR gets a more powerful, larger capacity, 2.8-litre turbodiesel. That means you've got more grunt for driving and towing. Fuel use is slightly higher, but only by 0.2L/100km. Highlights include 17-inch steel wheels, A/C, Toyota Safety Sense, a 7-inch (as opposed to 6.1-inch) touchscreen with Toyota Link (an app which shows nearby fuel stations, parking places and weather) plus premium fabric seats.

4x4 models also have a rear-diff locker, something that comes in handy and is missing on some key rival utes. 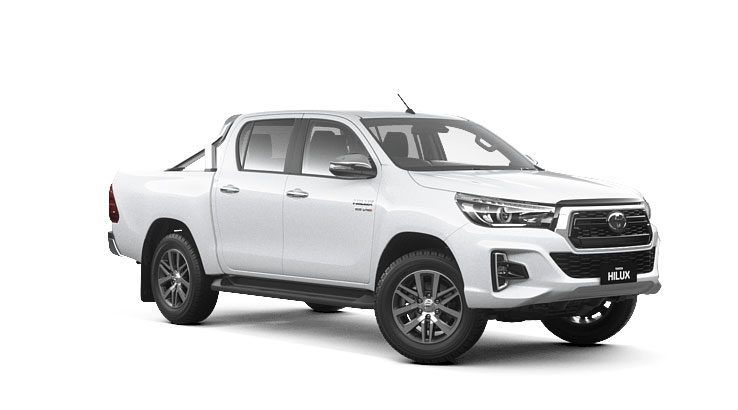 According to Toyota, the SR5 is loaded with technology. It also has some extra passenger comforts and fancy bits, including the following:

There's also the option to pay for a premium interior (on the 4x4 double-can pick-up) model. 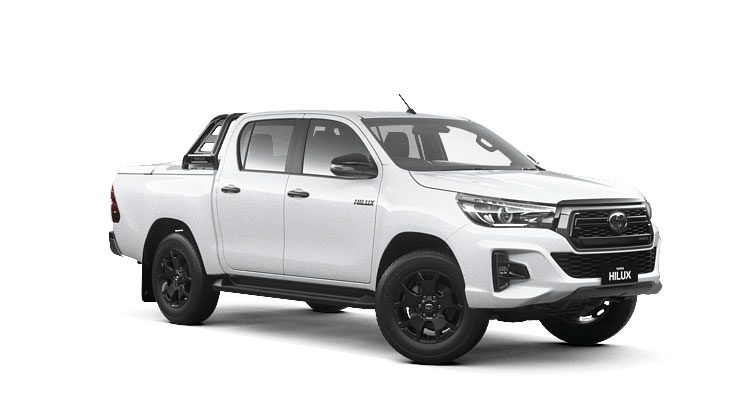 The automatic-only Rogue gets extra stylish additions and a premium interior. You'll experience a higher rate of fuel burn, but you do get the following:

The dual-cab only, 4x4 Rogue starts at $68,031. It's basically the top-most spec of the non-off-road focussed HiLux models. 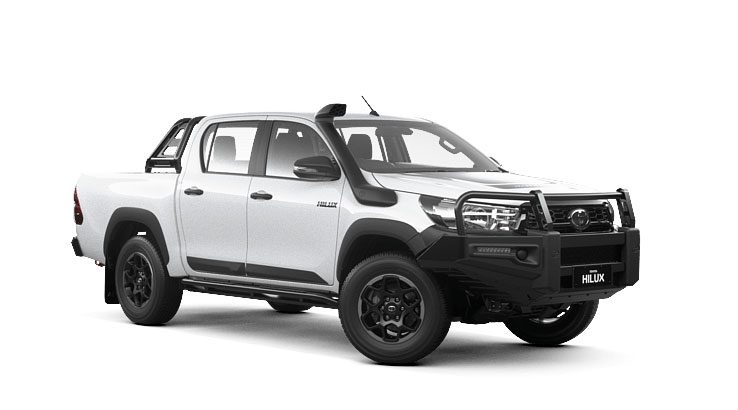 As the name suggests, Toyota tailors the Rugged for off-road. Highlights include the following: 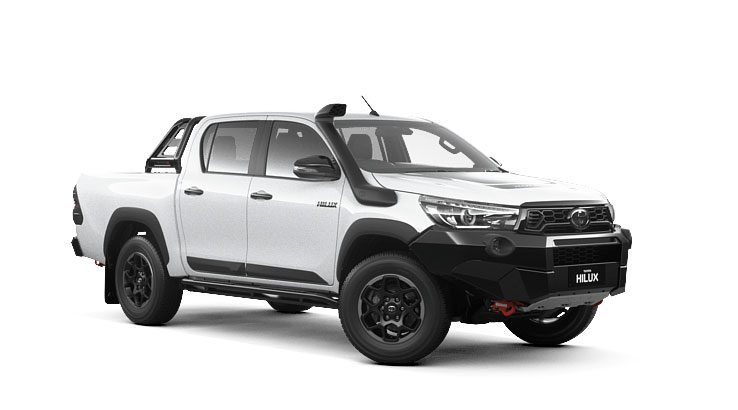 Top-of-the-line strength is the phrase Toyota uses to sum up this HiLux, it seems to be based upon the Rogue for interior equipment. In addition to the Rugged, you get the following features:

It still comes with a few other bits and bobs as well. Basically, if you wanted to drive through the muddy trails of Jurassic Park, but also wanted a little more comfort than the Rugged, this is probably the HiLux for you. Even a T-Rex would likely think twice about tackling this beasty ute.

Why buy a HiLux? First, it's a well-respected ute with a badge that could suffer lower depreciation than lower demand rivals. Second, the HiLux does a lot of stuff really well. Third, it's generally highly-rated by car reviewers. Fourth, Toyota has an impressively extensive dealer network across the country.

Want to find out more about the HiLux? Read our HiLux comparison review, where we've combined the opinions of several motoring experts to give you a sense of what the HiLux is like to own.

Things to look for in a car loan

When comparing loans for your new HiLux, keep an eye out for the following features.

The more of the above boxes that get ticked, the more competitive the loan will typically be.

How to compare car loans for the HiLux

First, you need to decide whether it's a private or business purchase. That will narrow down the type of loans you'll be looking at. We have a dedicated business car loan comparison page

Then, decide if you want to offer your HiLux as security against the loan.

With a secured car loan, the lender will register an interest in the vehicle and if you fail to make repayments, they'll reprocess it. However, the benefit is a generally lower rate of interest as this presents less of a gamble for them. If you don't want to offer the ute as security or want to be able to spend some of the loan on other expenses, think about an unsecured car loan. The interest rate (how much you pay back as a fee for borrowing the money) won't be as competitive, but you are then free to spend your money on things like modifications or On-Road-Costs (ORCs).

Also, remember to take into account things like application fees and early repayment charges. Given the choice, most people would probably go for a loan with no upfront charges.

How to use the above loan calculator

To see quotes for HiLux loans, input the amount you'd need to borrow and set your term. The longer the term, the lower the monthly repayments, which can make a new HiLux more affordable by spreading the cost over a greater time period. A $35,000 loan over three years versus seven is basically double the monthly repayment. Obviously, the longer you're repaying your loan, the more you'll pay in interest. That's something to weigh against the enticing lower monthly loan payments.

If you're able, it's often beneficial to have at least a small pot of savings you can put towards your HiLux purchase. That way, you don't have to borrow 100% of the car's value and you can cut your monthly outgoings. However, real-life doesn't always work like that and, when used wisely, you might view a loan as a necessary and acceptable commitment.

If you want to know more about how car loans work, as well as the requirements to apply for one, check out our detailed car loans guide.