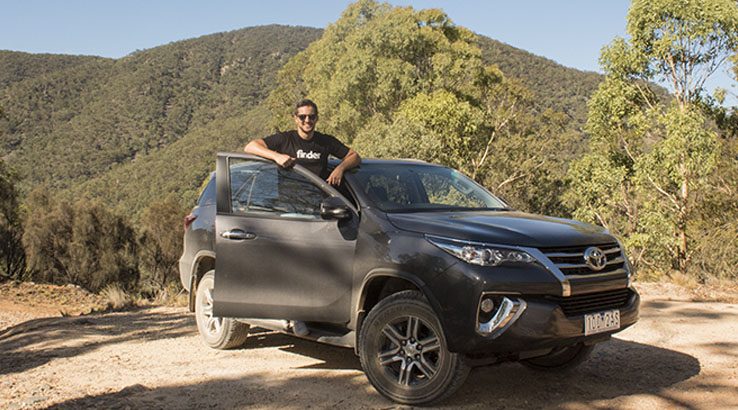 The Toyota Fortuner is one of three SUV models that Toyota offers, sitting between the Kluger and more luxurious Prado as a capable family four-wheel drive.

Based on the sales-topping, “unbreakable” Toyota HiLux platform, the seven-seater Fortuner has the pedigree to be a durable vehicle as well as a capable off-roader.

We spent a week with the mid-range Fortuner GXL to see what it’s like and who it may appeal to.

We tested the GXL variant of the Fortuner which was optioned with an automatic gearbox ($2,000) and premium interior ($2,000), bringing the grand total of the tested vehicle to $52,540.

Inside the Toyota Fortuner GXL there are traces of premium feel. While you do get leather seats and steering wheel, most other touchpoints and surfaces are hard plastics. This can either be a pro or a con depending on what you plan to use the vehicle for. If you’re after a durable interior, this is definitely a positive.

Apart from the dials for the air conditioning which feel a bit dated, everything is laid out pretty well. You won’t get dual-climate control, but the aircon does do a good job of cooling and warming passengers across all three rows.

The updated infotainment system is an improvement on the one found in the Toyota C-HR and 86 GTS, but there’s still some way to go before it catches up to competitors’ systems. With that being said, we were impressed by the onboard voice assistant and no awkward, unwanted phone calls were made. In usual Toyota fashion, there’s no Apple CarPlay or Android Auto but it does have DAB digital radio.

Passengers in the second row will also have a pleasant experience, with plenty of leg room and headroom as well as air conditioning vents and storage in the doors.

The third-row seats were simple to set up and retract, and with the second row configured for a passenger of just over six-foot tall, I was able to fit in the third row. While the fit was snug in regard to both leg room and headroom (I was a little hunched, even after playing with the reclining settings), it would be fine for a short trip for someone of my height (six foot). Kids and adults shorter than me will have no trouble and be fairly comfortable for longer trips. There is also ample storage for third-row passengers.

The Toyota Fortuner GXL has smart-key entry as well as push-button start making it easy to get up and going.

Along with this, the driving position in the Fortuner is also quite good. Electric adjustable seats and a joystick-style mirror adjuster makes getting comfortable a quick, simple job. You can also change the reach of the steering wheel, albeit minimally.

Our initial thought on the Fortuner’s ride is it was a bit jarring, but this wasn’t too unexpected as we found the Toyota HiLux to be the same. Once we got onto the motorway we found it did a great job of ironing out bumps and jolts at speed.

Steering can be a bit vague and needed adjustments to stay in a straight line, but this is something we’ve experienced with other vehicles of this size.

For me, the steering on the Toyota Fortuner felt quite light. It was easy to maneuver and didn’t feel like I was driving a large 4x4. Coupled with the reversing camera and sensors, the vehicle was a breeze to park and a lot more nimble than you would assume for its size.

With 130kW of power and 420Nm of torque on tap the engine is slightly down on power compared to some competitors like the Ford Everest. Despite this, the 2.8-litre turbo diesel does its job well. With a mixture of city, highway and off-road/unsealed road driving we saw an average fuel economy of 9.1L per 100kms. The fuel tank’s capacity is 80L.

There are a few safety technologies missing from the Toyota Fortuner, most notably Autonomous Emergency Braking (AEB). Despite this, the vehicle still holds a 5-star ANCAP rating.

To test the Fortuner GXL on unsealed roads we took it to Wombeyan Caves. Not extreme off-roading by any means but we travelled over gravel, rock and some fairly corrugated surfaces which gave us a good indication of the comfort of the Fortuner. While we found it to be fairly shaky when on the rough stuff, steering did feel composed.

After some time travelling over these surfaces, the vehicle did develop some rather annoying rattles and squeaks. The worst of which was in the cupholders.

While we didn’t take it through any serious 4x4 terrain, there are some pretty impressive numbers you should know.

You get a rather tall 225mm of ground clearance as well as an approach angle of 30 degrees. This means it can clear some stones and obstacles without bottoming out and climb some fairly steep terrain. There’s also a 700mm water wading depth, so you can trudge through some pretty deep bodies of water.

A low-range gearbox, diff locks and hill-descent control round out this serious off-road package, which would be capable of taking you to some pretty remote places.

With these numbers, features and Toyota’s history of building tough, capable 4x4s, you could confidently take this off-road. 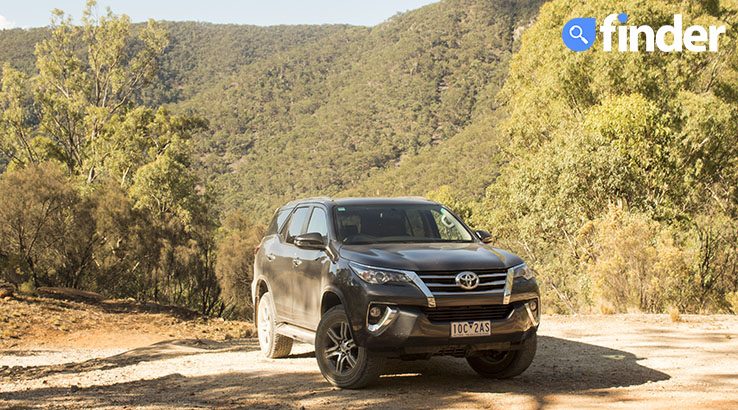 Planning on towing with the Fortuner GXL?

With the optional automatic gearbox, the Toyota Fortuner has a braked towing capacity of 2,800kg.

If you opt for the standard manual gearbox, this increases to a three-tonne towing capacity.

To calculate if you’re able to tow your van, check out our guide on caravan towing considerations.

With all 3 rows of seats in use there are 200 litres of boot space. When looking at it, this is enough for a few bags of groceries or boxes. With the third seat easily stowed away to either side you have 716 litres of storage space. The third-row seats fold up to either side of the vehicle which will inhibit what you can put in the boot as they eat up some valuable width.

With no passengers in the back and the back 2 rows folded down, you’re looking at a large 1,080 litres of space.

When looking at the GXL you really need to consider what you want. Lacking some creature comforts and modern safety technology, the Fortuner is a bit behind some of its competitors.

If you don't mind not having the latest driver assists and safety aids such as AEB, or features like dual-climate control aren’t important to you, the Fortuner GXL could be the 4x4 for you.

Being based on the HiLux and with Toyota’s long reputation of developing and manufacturing reliable and durable vehicles, it’s reasonable to expect the Toyota Fortuner to have a long lifespan.