When launching the C-HR, Toyota said it has "brought excitement and driving pleasure to the SUV market". We got behind the wheel of the 2WD Toyota C-HR Koba to see if that was true. 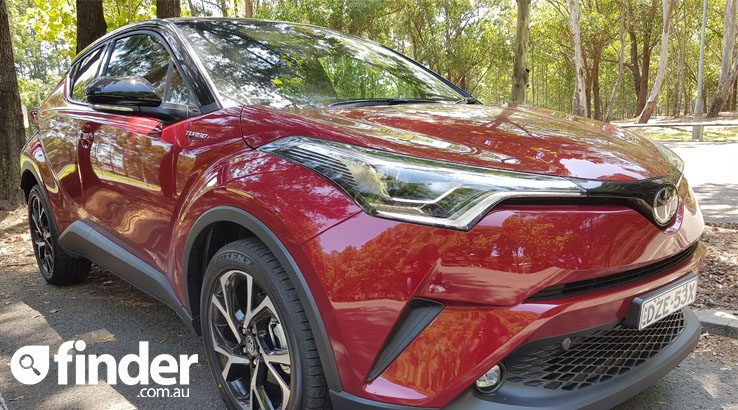 The Toyota C-HR, also known as the Coupe High Rider, was designed and developed to bring a "younger, image-conscious" consumer to the Toyota brand. With its out-there looks and elevated driving position, is this the car that will bring young buyers back to the brand?

It seems the designers at Toyota were given free rein on the C-HR, the result being a car that turns heads. Just the sort of vehicle young people like.

We are fans of the styling, which grew on us the more we saw it. The sharp lines, angles, long headlights and various colour combinations (ours was "Atomic Rush" red with a black roof) certainly hit the mark.

In particular, the dash, air conditioning and infotainment controls have been shifted slightly to point to the driver. The manually adjustable seats with their leather trim are also quite comfortable and the digital onboard computer is easy to navigate from the steering wheel controls.

The infotainment system leaves a bit to be desired, with the car offering a standard 6.1-inch touch screen unit that you'll find across a range of Toyota vehicles. It doesn't come with Apple CarPlay or Android Auto and it's a little slow when it comes to responsiveness. We feel there could have been a better solution.

Sydney has been HOT lately, but the dual-zone climate control, with Nanoe (Nano-e) technology, was up to the job. If you're like me and hadn't heard of Nanoe, you will be pleased to know that it essentially moisturises the cabin air.

The thing I was most surprised about with the C-HR is how well it rode on the various Sydney roads we tested it on. It took everything in its stride, producing a really soft and comfortable ride. Steering is responsive and the vehicle feels quite nimble, but it's somewhat let down by the 1.2-litre turbocharged engine.

Producing 85kW, which is delivered via the CVT (continuously variable transmission), it was found wanting on occasion. I can't help but feel that had the engine had a bit more to give, this would have been a terrific SUV. If you're driving around the city though, this isn't going to be an issue.

Once you get up to speed the car is quiet and comfortable.

Toyota says that the C-HR consumes about 6.3L/100km, but in our tests (which, to be fair, did include traffic) we were seeing numbers in the high 7L to mid 8L range.

In terms of safety and tech, the Toyota C-HR has all the trimmings. Lane departure warnings and assistance worked well without being as aggressive as other brands, gently guiding you back into the lane. Blind spot detection was available as well and you will need to rely on these due to the size of the rear pillar. Front and rear parking sensors coupled with a tight turning circle mean the car is easy to maneuver and park in tight situations.

You can find the full list of safety and tech features further down the article.

There is a slight amount of storage room in the back with cupholders in the doors instead of the standard fold-down centre console.

There aren't air conditioning vents for rear passengers, but this isn't a massive issue in a vehicle of this size.

Offering up 377 litres of boot space, you're getting more than a Hyundai Kona, CX-3 and Nissan Juke. This number increases to 1,112 litres when the 60:40 split folding rear seats are down.

The vehicle includes a space-saver tyre, so if anything should happen you will have to limit speeds until the full tyre is fixed or replaced. 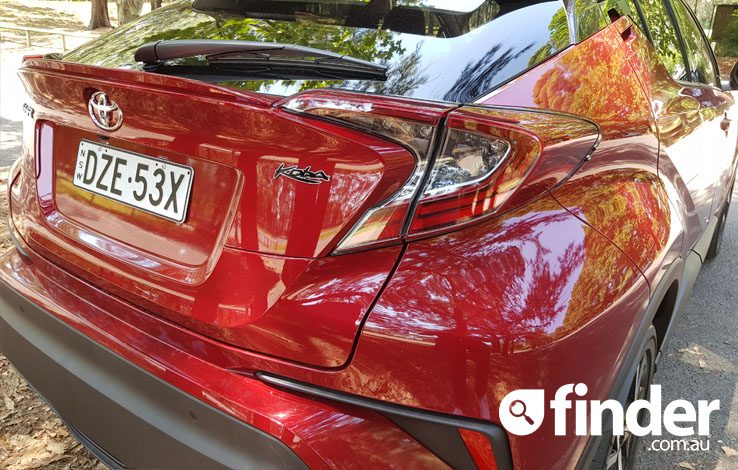 The servicing schedule for the Toyota C-HR runs as follows:

Satellite navigation map updates have an RRP of $150 with dealer fitting and GST on top of this.

It's also worth noting Toyota's recommendation to fill the vehicle with premium unleaded.

Along with 7 airbags, keyless entry and start, the C-HR features the following safety and tech.

All in all, I liked the C-HR Koba. Its handling and ride is really good but it's let down by that 1.2L engine. Nevertheless, it's still one of the better vehicles in the segment which only serves to make us look forward to the next iteration of the C-HR Koba.

If we see a little bit of a beefed-up engine and upgraded infotainment system, the C-HR will become a much more exciting and compelling proposition to the younger market Toyota is going after.