Touring Telstra’s secret labs: How phones get tested in Australia 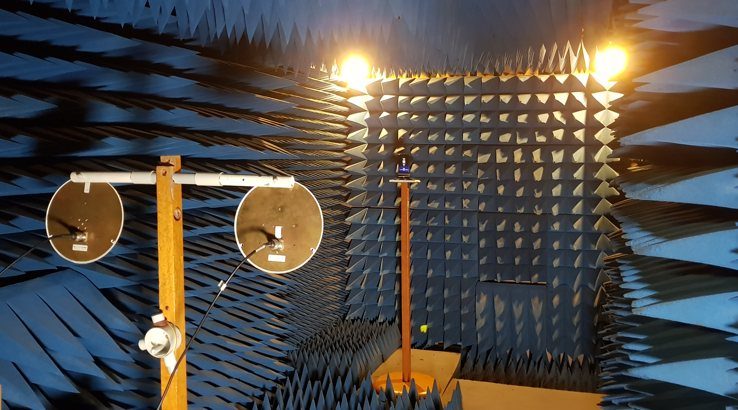 We go behind the scenes at Telstra’s top-secret phone testing lab to find out how phones are certified for Australia’s mobile networks.

Building a mobile phone involves, as we’re sure you’re aware, more than just tying together the silicon equivalent of two cans and a piece of string. Modern smartphones involve an incredibly complex fusion of technology to design, produce and bring to market.

Well before you click to buy your latest phone, whether you’re a fan of contract mobiles or outright purchase, they’re tested by the telcos that sell them. Telstra recently took me on a tour of its semi-secret testing facility where it sorts out the suitability of smartphones to operate on its network, including those that it grants the Blue Tick, indicating that they’re particularly suitable for regional and remote users.

We could tell you where it is, but...

Telstra has asked that I don’t reveal precisely where the lab is, largely because the process of actually testing a phone is quite an intense one, and as a result they’re often working on phones that won’t see daylight in consumer terms for quite a number of months, under rather exacting non disclosure agreements.

Given what we already know about the so-called iPhone 8, that means it’s quite likely that while I’m being given a tour of the facility, iPhone 8 models are being tested somewhere in the vicinity. All I’m allowed to say is that it’s located in Western Sydney.

More complex than an online NAPLAN

Testing a new phone’s suitability for Telstra’s networks is a rather involved process, and that means that simply taking it for a spin around the block won’t meet the kinds of standards Telstra requires to ensure that it’s both compatible with the network and also not likely to create problems for its user or anyone else on the network. Mobile spectrum in Australia is heavily regulated, so devices have to meet strict guidelines for suitability as per ACMA guidelines.

It also means that Telstra has to run a small-scale version of its entire Australian network infrastructure out of its testing labs to see how a new device actually operates on the network. That means that for some tests, lab suites are set up inside what are essentially Faraday cages, allowing no regular Telstra mobile signal into the area.

Instead, phones being tested for (as was demonstrated to me) peak network speeds are instead tethered with a physical cable sending down the same frequencies they would encounter from the regular network. It’s kind of mind-bending, because it means that a mobile network has been built in small scale but to ensure scientific accuracy while testing, the mobile phones are working from a fixed line that’s connected to a small-scale mobile network. 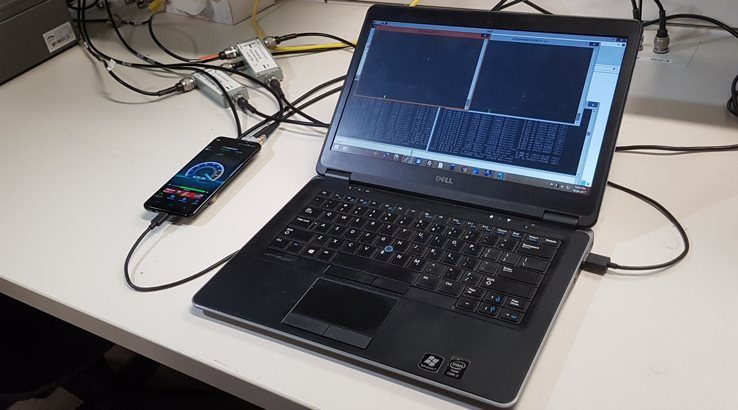 Telstra’s testing process is rather extensive. According to Telstra representatives, each phone is put through no fewer than 8,713 individual tests, covering everything from peak network speeds to Blue Tick suitability to voice quality.

Telstra didn’t seem keen for me to hang around for the necessary 1,864 hours of testing that a typical phone might take, so I only got to see how a few key tests were run. 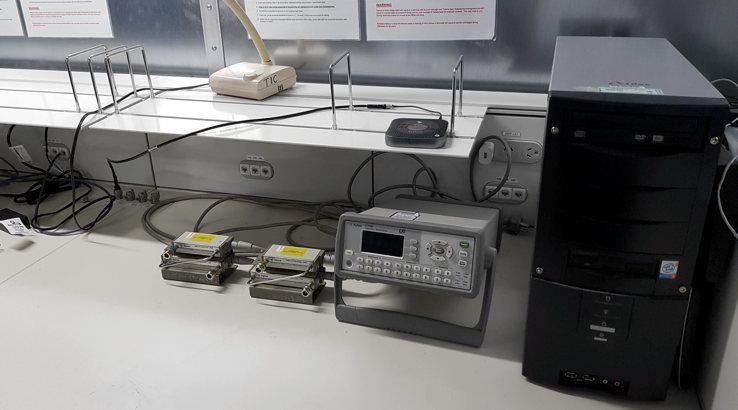 The reality of a lot of the kinds of testing that phones undertake is that it’s not going to be that visually interesting anyway, because they’re testing against set criteria in pre-determined ways to meet specific needs.

I did have the opportunity to see how Telstra tests phones for Blue Tick compatibility, which is performed in a specially built anechoic chamber where each phone is rated for its reception sensitivity to see if it meets Telstra’s guidelines.

From the outside Telstra's Blue Tick testing area rather resembles a walk-in-fridge. 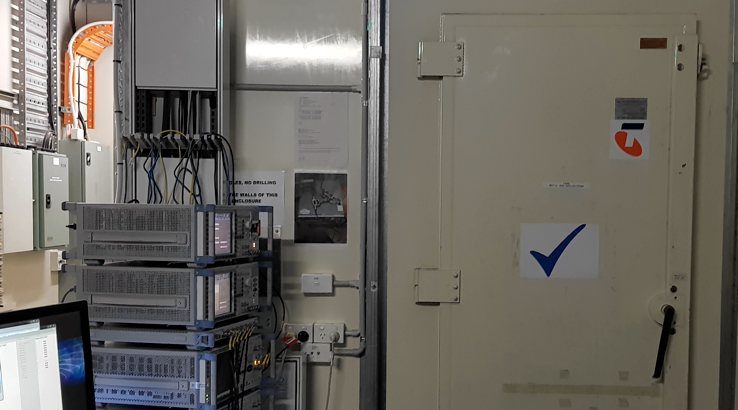 Head inside and it’s more of a matter of looking like a prog-rock album cover, thanks to the hundreds of dark blue spikes that make up the majority of the room. 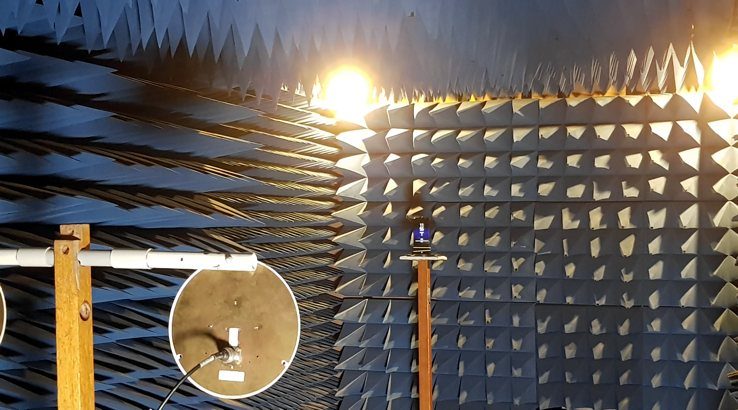 They’re not an OH&S hazard as they’re a soft foam material, but it’s a very visually striking area. 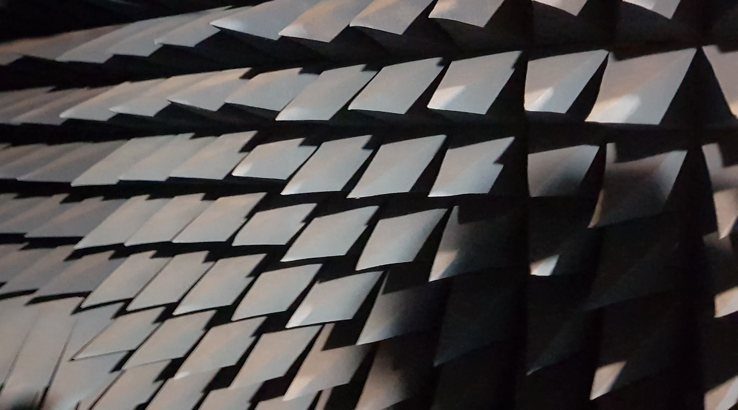 Testing mobile reception is a variable matter because that’s the nature of radio waves. Every single Blue Tick certified phone that the telco has rated is tested in five different holding positions, because the way mobile antennas work means that different holding patterns can affect overall reception.

That’s particularly important if you’re on the edge of a mobile tower’s reception area in more remote parts of Australia, where you’re not likely to get gigabit speeds but even a trickle of voice can be a big plus.

One interesting note here is that, according to Telstra, every single Blue Tick phone has been tested with the same hand in those five positions for every device certified to date for Blue Tick viability. 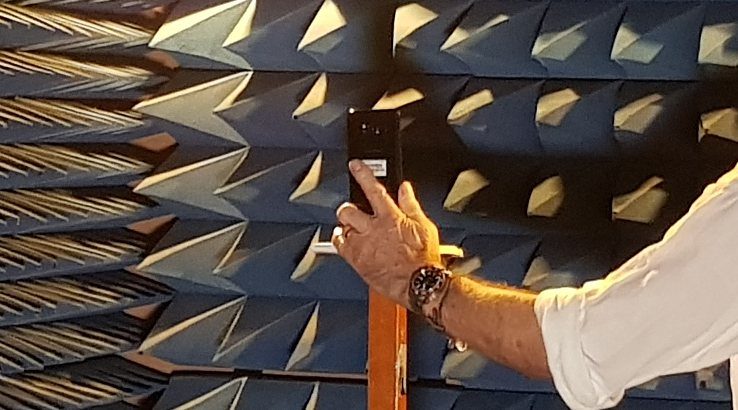 Not a plastic test hand but instead but a Telstra employee, which indicates rather solid job security for that particular engineer.

There’s enough scope in the way Blue Tick works that while you can minutely affect reception depending on your hand size and mass a Blue Tick phone should still offer superior reception anyway, but by keeping matters to a single physical profile, Telstra can ensure that their results across different handsets have the same overall interference effects from being held. Testing for Blue Tick compatibility takes around five minutes of indepth testing per phone.

The testing profiles used are extensive, but it’s not just a matter of being tested and then heading down to the pub. Every time a phone receives a new update, it’s tested against the same criteria to ensure that it will offer the same or hopefully better network performance.

This isn’t always the case; while Telstra didn’t name brands or models, an engineer did confirm to me that some devices have fallen off the Blue Tick list, for example, because software updates have modified its radio properties to the point where it has fallen below the acceptable threshold. Thankfully, that appears to be much older history now, with the company noting that an increasing portfolio of phones pass Blue Tick certification these days, although it’s certainly far from every phone.

The need to test out new updates for network performance is one of the key reasons why some updates take considerable time to roll out to handsets provided by Telstra. If an update fails certification for some reason, Telstra will roll it back to the manufacturer for modification where feasible. It’s a delicate balancing act and there’s certainly no sign of anyone slacking when it comes to delivering updates to phones when they’re ready.