Top 10 QLD moments not made by actual Queenslanders

finder.com.au conducted a huge study into the true eligibility of rugby league players for State of Origin and the results were shocking.

However, the true impact of what we uncovered can only be felt when you point out just how these players have impacted on the respective NSW and QLD teams.

Born in Christchurch, Tonie Carroll was well known for playing the game tough. Tough enough for two. It was he who was charged with protecting integral Queensland playmaker Darren Lockyer from being trampled by New South Wales’ big men. For the series’ decider in Game III of the 2005 series, the Maroons named a 16-man team, with a TBA in the 17th spot, enraging NSW fans. Carroll, returning from injury, then played in the weekend game for the Broncos against Cronulla to prove his fitness, before being drafted into the QLD squad at the last minute. 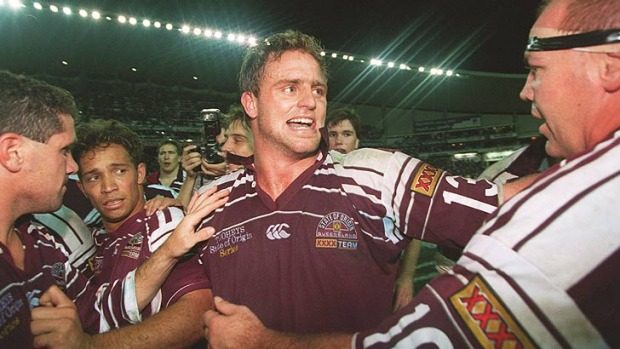 Fijian flyer Lote Tuqiri should not have played Game II of the 2002 series. He had a suspension to serve for a dangerous throw, handed down by the judiciary weeks earlier. To get around this problem, Queensland left him off the team sheet, allowing him to serve his ban for his club on the weekend prior to the State of Origin. The selectors then drafted him into the team at the last second so he could play having served his suspension. He would go on to score only the second hat-trick in origin history in that game – and kick three goals no less - to effectively win the game for QLD. 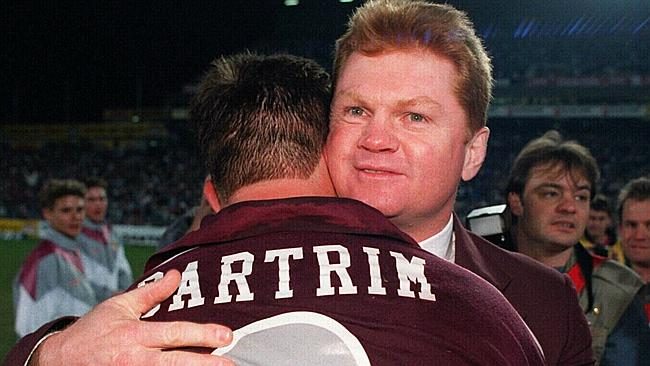 New South Welshman Craig Greenhill made six appearances for QLD, but he will be best remembered for becoming the first State of Origin player to ever be sent-off. It’s quite the feat really, considering the thuggery of the 15 years previous to Game II, 1996. Greenhill laid NSW enforcer Paul “Chief” Harragon out like a picnic blanket via a high tackle for the ages. The image of Chief lying still on the grass as Greenhill makes the lonely walk towards the sheds is one of folklore. 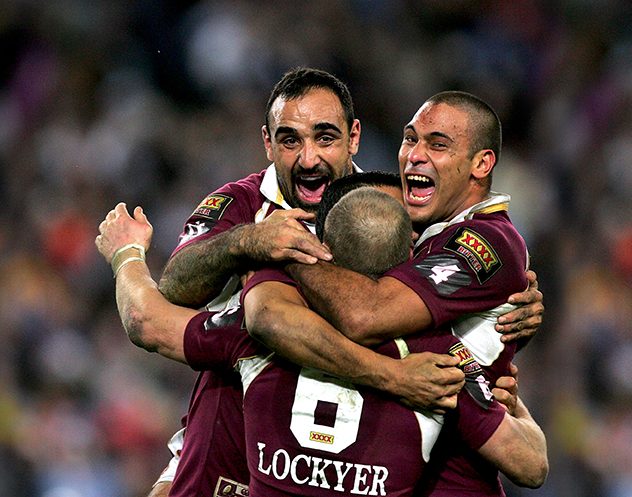 In the 22nd minute of Game III in the 2008 State of Origin series, a rookie winger by the name of Israel Folau – only 19 at the time - capped off his first series with a match-winning two-try performance. The highlight was a soaring leap above Anthony Quinn in the corner, followed by a miraculous put down that defied not only the laws of league, but those of gravity. Unfortunately for his rival state, Folau was actually born in Minto, NSW. 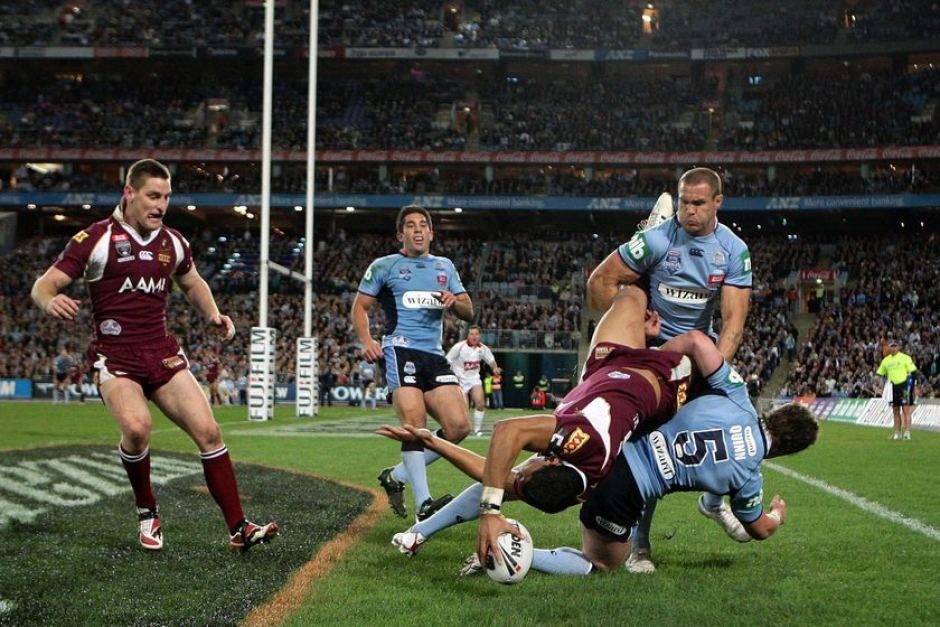 6. Adrian Lam from PNG to MOM

During the heart of the Super League war, a depleted Queensland had to draft in players from all over the world to bulk out its squad. This included Papua New Guinean Adrian Lam, who played a starring role for the Queenslanders at halfback throughout the unlikely 3-0 series sweep. It was capped off by a man of the match performance in Game III, and the star would go on to represent QLD on 14 occasions, while simultaneously playing for PNG seven times. Huh? 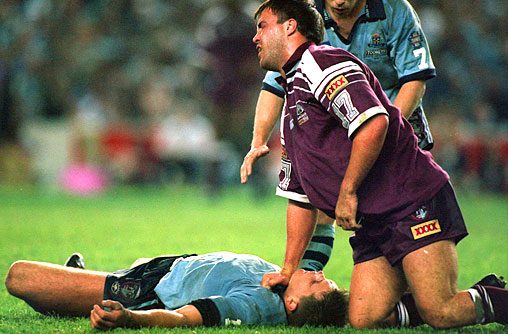 Queensland is famous for snatching victory from the jaws of defeat with freakish last minute tries, even if they are scored by Kiwis. With NSW winning 23-18 and only a minute to go on the clock, playmaker Kevin Walters turned the game on its head by quickly piloting the Queenslanders down field. When he looked for a player to send through the line for a try under the posts, who was there but Christchurch born Tonie Carroll. A young rookie called Darren Lockyer would plot the conversion and seal Queensland a classic last minute victory. The State would go on to win the series 2-1. 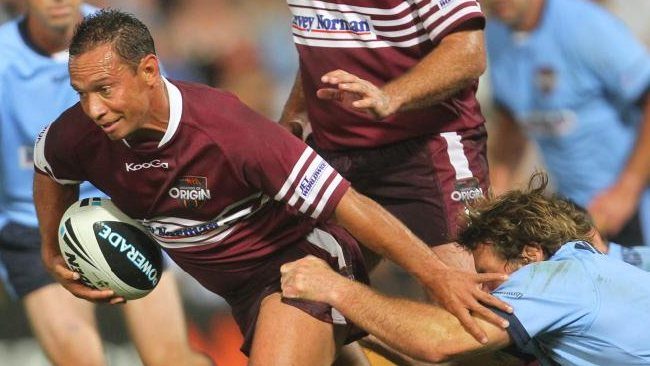 Legendary Fijian Petero Civoniceva was the unbreakable diesel engine that drove QLD through the whole of the 2000s. So much of the team’s success was built off his consistent metre-eating performances that the likes of Jonathan Thurston and Darren Lockyer would do well to credit a lot of their success to the big man. He would break many records during his career - including that of being the oldest origin player ever at 36 years and 53 day – and with 33 games, contributed to Queensland more than any other forward in the State’s history. 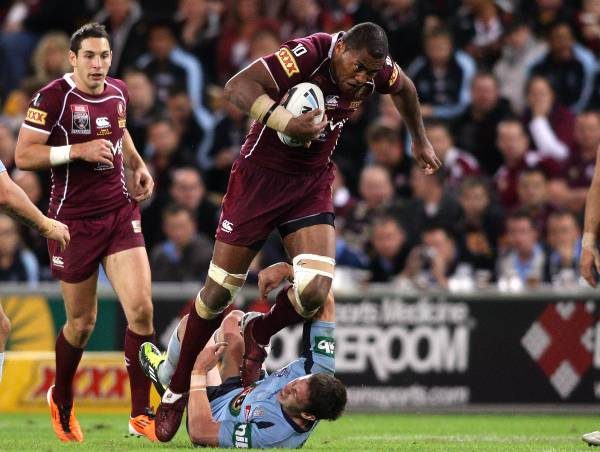 One the of mightiest athletes to ever play the game, Kempsey-born New South Welshman Greg Inglis could have been on this list a number of times - he was player of the series in 2009, for starters. However, it was the “try” that helped him pass Dale Shearer’s record for the most State of Origin four-pointers for Queensland that most hurts his birth state. In Game 1 of the 2012 series, Inglis scored the match-sealing and series defining try in the 73rd minute, despite clearly knocking on. He broke the record and NSW hearts in the process, piling on the woe during the Queenslander’s eight series victories in a row. 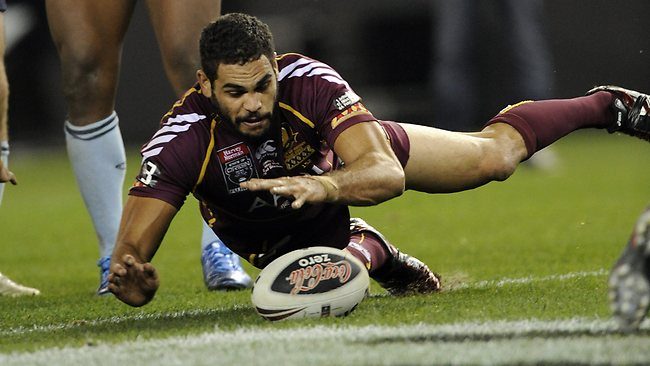 Hailing from Hat Head in New South Wales, Wayne Bartrim’s origin debut in Game 1 of the 1995 series will be remembered for many reasons. Notably, it saw Paul “Fatty” Vautin’s team of no-names topple the star-studded NSW line-up in a dour try-less experience. It was a single goal in the 30th minute that separated the teams at full time, with a 2-0 victory to Queensland. Said goal was scored by Bartrim, and over the rest of the series – which Queensland won 3-0 – he would be the series’ top point-scorer, contributing 18 points. 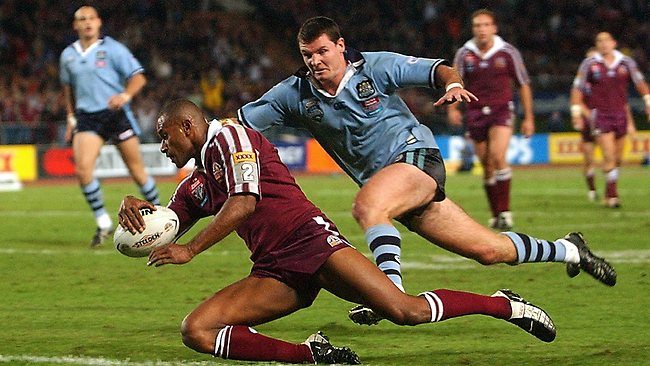 To be fair to Billy Moore, of all the non-Queenslanders to play for Queensland, his claim for eligibility is the strongest. Living near the State lines, it was simply the fact that the nearest hospital happened to be in New South Wales that sees his birth certificate blemished by the large “NSW” of the southern tribe. If only a young Mr. and Mrs. Moore knew the player their son would become and how this blemish would impact his Queensland credibility. Or how his impassioned screams of “Queenslander” while walking down the tunnel and into the cauldron after half-time in Game I of the 1995 series, would feel somewhat hollow as a result. 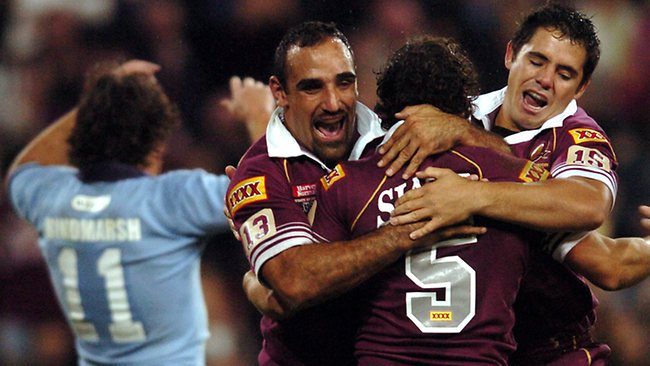