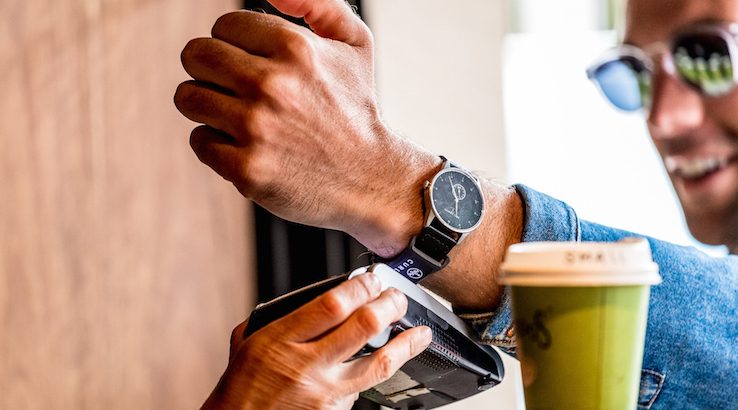 Five fintech innovations that have transformed how we pay.

2017 has been a massive year for payments in Australia. As our reliance on digital technology increases, traditional ways of payment (such as cash or cards) are becoming less and less relevant. In fact, it’s predicted that Australia will become a completely cashless society by 2022. As such, we’ve seen everyone from startups to the big banks adopting new ways to pay to simplify how Aussies spend.

Now that the New Year is approaching, we’re looking back at our favourite payment innovations of the year and how they’ve changed the ways Aussies pay. We’ll also look at the future of payments and some new tech we can expect in 2018 and beyond.

INAMO is an Australian fintech startup that has launched a range of wearable payment accessories to allow Aussies to make payments without their wallet. Founder Peter Colbert was inspired after he went surfing in Manly one day and realised he didn’t have any money to pay for a coffee afterwards.

At the beginning of the year, the team rolled out the trial INAMO Curl to a select group (including finder) to test before going to market. You can check out our review of the Curl for more details, but essentially it’s an NFC-enabled chip that you can preload with funds and then use to make contactless transactions. You can slide the waterproof Curl onto your watch, smartwatch or fitness tracker band or clip onto your keychain, making it ideal for making payments when you don’t want to carry your wallet (such as if you’re going for a swim or a run).

Since then, INAMO has rolled out its INAMO Curl and Wave (designed to clip onto your keychain) in a rainbow of different colours that will set you back $24.95 each. You can then load up your account with funds via your online account and make purchases wherever Visa is accepted.

INAMO was one of the first of its kind available on the Australian market and even inspired similar wearable payments launched by Westpac and Bankwest during 2017.

In September, Macquarie Bank launched a pilot of its new open banking platform, giving its customers more control over their everyday banking data. The platform was the first of its kind in Australia and used Application Programming Interface (API) technology to allow third-party apps and fintech companies to connect to the platform. Customers can then opt to share their data in order to leverage these products and services.

Macquarie customers can securely connect their personal banking data, including transaction history, home loan balance or even business information, directly into third-party providers (such as budgeting apps or account software). This means they can take advantage of these third-party services without having to provide their banking logins.

Considering that Australia is moving into an open banking environment, it’s likely we’ll see more technology like this from other banks over the next few months and years.

Credit card fraud in Australia rose to $417 million last year and continues to rise by 15% annually, according to Australian Payments Network. So, IDEMIA and FlexiGroup partnered up this year to create the new MOTION CODE credit card with a dynamic CVV to increase payment security. The card has a digital CVV that changes to a new code every hour.

As your CVV is usually a static three-digit number located on the back of your card, this dynamic alternative offers more protection if your card details are stolen. Although this type of technology has rolled out overseas, it is a first in the Australian market.

The technology launched in 2017, but it won’t be available with any Aussie banks until the new year. IDEMIA has yet to confirm which ones, but it has announced that the MOTION CODE will be available through some Australian and global card issuers in 2018.

Unfortunately, these security measures won’t protect your finances if your physical card is stolen and is used before the CVV changes. However, any fraudulent transactions will be protected by the usual measures you can expect from your bank.

"A person’s voice has five to ten times as many security points than other methods such as fingerprints so we know this will improve security and be welcomed by our customers,” said Managing Director Customer Experience and Digital Channels Peter Dalton during the pilot stage. “The technology is now so advanced that it can tell the difference between identical twins or even a voice recording."

Talk to NAB with Google Assistant

Forget in-branch bank tellers, NAB launched a pilot app called Talk To NAB to answer customer questions from the comfort of their home. Announced in October, customers can use their Google Home or smartphone to ask NAB questions via Google Assistant. You can ask it general banking questions from how to reset your password to the steps you need to open a bank account. You can even ask your Google Assistant for help when picking a loan or credit card.

“This is very much a first step for us in the voice-based smart assistance space. We will continue to develop our capability with the Google Assistant over time, so it can answer more questions and perform more tasks for NAB customers,” said NAB General Manager Digital & Innovation Jonathan Davey.

The Talk to NAB app is another Australian first and follows other NAB “self-assistance initiatives” including the virtual banker chatbot for businesses and Facebook chatbot which was in pilot earlier this year.

The future of payments in 2018 and beyond

With fintech companies popping up like daisies and big banks investing more into digital alternatives, the possibilities of payments are almost limitless. However, the New Payments Platform (NPP) is bound to have one of the biggest impacts on digital payments in Australia in 2018.

Set to kick off in early 2018, the NPP is a new payments infrastructure that will enable faster and more flexible payments. You can use it to send and receive real-time payments, meaning you’ll no longer have to wait hours or days for cash to appear in your account when you’re splitting a restaurant bill.

It’ll also make it easier to send payments in Australia. Rather than using a long BSB and account number, you can pay someone using their PayID. This will usually be their mobile phone number or email address. The NPP will also offer more data-rich payments. This basically means you’ll be able to include longer descriptions when making a payment. So rather than resorting to acronyms and abbreviations, you can describe your transaction with as much detail as you need.

Once the NPP goes live, BPAY is combining these features with the launch of its Osko platform. It’ll enable near real-time payments and 280-character descriptions, plus you can use it to make transactions using the payee’s email address or phone number. Unfortunately, the perks of the NPP won’t be available to everyone straight away.

You can only take advantage of the benefits of the NPP if you’re banking with one of the participating financial institutions. However, the NPP does predict that four in five Australian accounts will be reachable from the first day and this number will continue to grow over time.

Speaking of real-time payments, CBA, Westpac and NAB have also started collaborating on a new app called Beem, which cardholders can use to make instant payments. This will be available to all bank customers and small businesses that hold a global scheme debit card issued by an Australian Authorised Deposit-taking Institution (ADI).

These are just some of the perks you can expect from the NPP, but it's likely to lead to even more innovations in the future. Want to know the latest ways to pay? You can stay on top of the latest fintech news on finder.