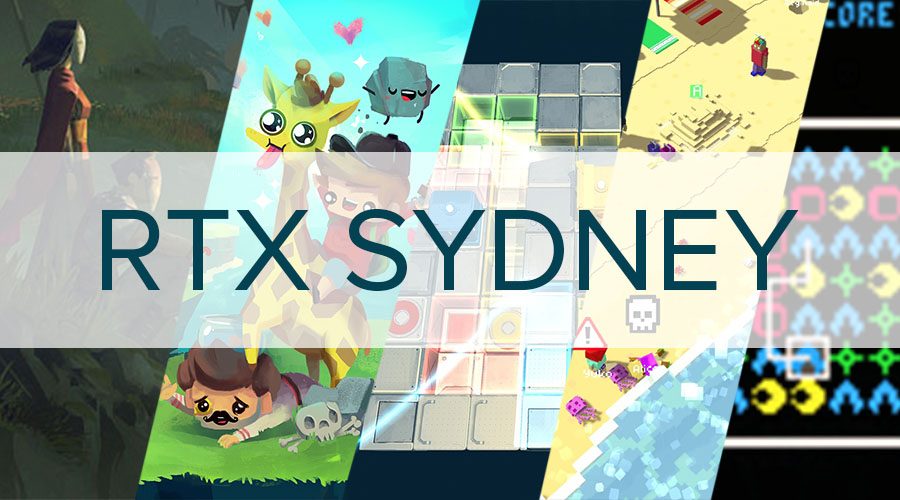 Multiplayer shines on the indie show floor at RTX Sydney.

The inaugural RTX Sydney at the Darling Harbour convention centre will perhaps be most fondly remembered for the appearance of Big Boss himself, Hideo Kojima, but on the floor there were also a number of memorable indie games available for the public to get some hands-on time with.

RTX Sydney had a focus on YouTubers and streamers that call the eponymous Rooster Teeth home, so it was the panels that drew most of the crowd. While the quantity games in the main hall paled in comparison to last year's PAX AUS 2016, there was still enough to keep punters occupied in between Let's Plays and talks.

While Framed 2 is an obvious show stealer here, we gave it a miss this time around after completing the demo at Loveshack's PAX AUS booth. Aside from that, these are the top five games that drew our attention at the event.

Every expo like this seems to have that one incredibly simple mobile game thrown into the mix. PAX AUS 2016 had the one-button space combat game Flingship and RTX Sydney had Ufo Tofu, a puzzle game built on palindromes.

Solely created by indie dev Albey Amakiir, Ufo Tofu asks the player to create the longest palindrome symbol strings possible within twenty moves. It's an incredibly simple concept that abducted any attendee who dared challenge it. While it's tricky to wrap your head around some of the longer strings, the real challenge becomes avoiding smaller palindromes within longer runs, effectively cutting potentially longer strings short and reducing your score.

Ufo Tofu is a real head-scratcher that will satisfy fans of puzzle games like Bejewelled and begs for an online multiplayer function along the lines of Words With Friends.

Albey plans to bring Ufo Tofu to Android and iOS around April/May 2017. We're looking forward to it.

The Adventure Pals makes no effort to hide its inspiration. A human child and his rubbery yellow sidekick traipsing through weird and wonderful lands filled with vegetable birds and breakfast beasts. Sound familiar? That's not to say it's a bad thing. In fact, The Adventure Pals may be the best Adventure Time game that never existed.

Players use their malleable sidekick (a giraffe this time around) to float through the air, swing from hooks and combat enemies in a 2D sidescrolling environment.

We played 2-player co-op in The Adventure Pals boss rush mode, where we went toe-to-toe with a variety of absurd and hilarious bosses. A Christmas tree that loses its pants when you attack it, a brute made from bacon, sausages and eggs (with a sentient yolk sidekick) and a fruit and vegetable bird... dinosaur... thing. Each boss is beautifully animated, the whole game is. While the game doesn't entirely rip off Adventure Time's style, I'd comfortably say it's of a similar calibre.

While there were a still a handful of bugs in our demo (falling through the floor and the occasional connection issue with controllers), developer Massive Monster is looking at an April/May release.

We were lucky enough to sit down with Sloclap's creative lead Pierre Tarno for some hands-on time with the upcoming MMO/fighter Absolver. When the game was first announced, we noted the visual similarities between Absolver and Dishonored, and what seemed to be a blend of Tekken-esque fighting and MMORPG elements.

While the distinct art style and RPG elements were present in our demo, we couldn't have been more wrong with our comparison to Tekken's combat style. Unlike the age-old brawler, button mashing is more or less a no-go in Absolver. In that sense, Absolver is more akin to the Dark Souls trilogy, or even Nioh, than anything else. Attacks and dodging to need to be timed perfectly and chained together to create a seamless flow of punches and kicks. Being forced to slow down and consider your next move is quite meditative but also necessary if you want to survive in the world of Absolver.

Hectic couch-based multiplayer games like Swordy and Arena Gods took control of the show floor at PAX AUS 2016 and RTX Sydney was hardly any different. However, the most notable local multiplayer game at the Rooster Teeth expo was hands-down Death Squared. The creators of insanely addictive mobile games like One More Line and One More Dash have been working hard to create a puzzle game with notes of Brothers: A Tale of Two Sons (which was one of our top Android games of 2016) and the recent multiplayer hit Overcooked.

Up to four players navigate a cube through a gambit of hazardous spikes and electrical currents to settle on a button that corresponds with their cube's colour. Each player's movement influenced the map, activating traps and blocking pathways for other blocks. This causes you to consider who goes where and when and encourages some dialogue between the players. Our time was spent with three other players, all shouting commands over the top of each other and bursting out with laughter when we were accidentally decimated or a friend fell off the edge.

We're looking forward to blaming anybody but ourselves for failing when Death Squared launches on Steam, Xbox One and PlayStation 4 later this year.

Think of the Children

I jumped into Think of the Children with a co-op partner, completely oblivious to the objective at hand. As the name would suggest, Think of the Children tasks you with tending to a small litter of kids in various dangerous outdoor settings but when we were dropped in the map, there were also sandcastles that needed building, burgers to be flipped and old men that needed suncream rubbed over their shirtless bods.

If this is parenthood, count me out.

When my co-op partner and myself eventually grasped the situation, Think of the Children became a game of juggling priorities (also comparable to Overcooked in that sense). Each of us sanctioned off our own jurisdiction of the backyard setting. I would watch over the pool and keep the barbeque burning, while my partner monitored the perimeter and tended to the picnic tables.

If a child runs onto the road or forgets its floaties, the player must retrieve the child by holding down the right trigger and toss it to a safe space, then rush back to the barbeque and cook some snags (tasks like these seem to keep the kids momentarily preoccupied).

It sounds easy enough. However, there are six kids to look after and usually just as many tasks to tend to. In our best round, we only allowed one child to die, an achievement we were oddly chuffed with.

Tyrienous is aiming to release on or around 14 May 2017 (fittingly, Mother's Day).

Nintendo is amping up the hype for the…