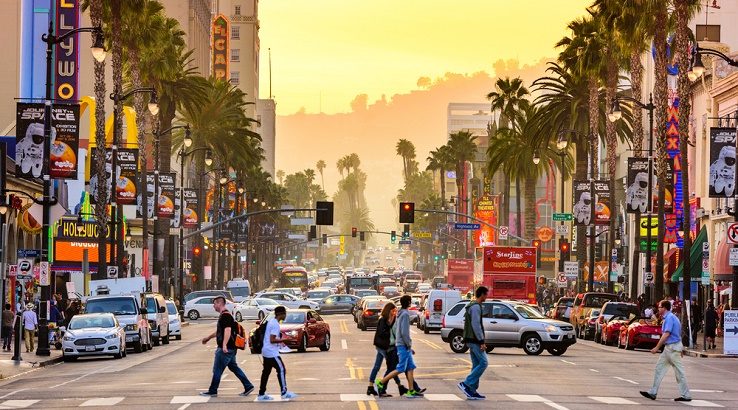 Qantas, Virgin Australia and Fiji Airways are headed to Hollywood...but who's doing it best?

Sorry, this sale is no longer running. Check our list of current flight sales to find a bargain!

Last week Fiji Airways took the lead in this Los Angeles sale war by selling seats for just $808 return. Now, Virgin Australia and Qantas have followed suit, both boasting sale fares to LA from $899 and $999 respectively.

Fiji Airways might seem best priced at this point but is it really worth it?

With so many options at your fingertips across three airlines, we thought we'd break down the fares, travel dates, flight routes and extras to see which actually works best for your holiday needs.

Fiji Airways wins this round. Its flights start at $808 return when booked through Skiddoo. However, book through Fiji Airways direct and that price tag jumps up to $849. This sale ends 30 September 2017.

The next best for price is Virgin Australia with fares from $899 return when booked through Flight Centre. This sale ends 27 September.

Qantas comes up as the most expensive, sporting tickets from $999 return. These can also be booked through Flight Centre. This sale ends 15 September.

All three sales allow for travel on different dates. Qantas has the largest range with flights from September-November 2017 and January-June 2018, providing flyers the opportunity to experience Los Angeles in autumn, winter and spring. Fiji Airways comes up second, with a slightly shorter range of dates between October 2017 and March 2018.

Virgin Australia is the most limited, featuring flights within low season from 1-30 November 2017.

Most major cities are covered by all three sales, though Fiji Airways or Qantas is your best bet for the widest range of departure locations.

Qantas also offers sale fares from Perth. Virgin Australia is the most limited, flying out of Brisbane, Melbourne and Sydney only.

Qantas and Virgin Australia both fly direct to Los Angeles from Brisbane, Melbourne and Sydney and are the best options if you want to get into LA as soon as possible.

All Fiji Airways flights include a stopover in Nadi, Fiji, which could work in your favour if you're planning to go long and include an island break before hitting Beverly Hills.

If you're the kind who tends to travel with your entire wardrobe, Qantas and Virgin allow two 23-kilogram bags of luggage on their economy seats. Fiji Airways limits you to just one 23-kilogram bag.

Depending on where your frequent flyer membership sits, you stand to earn points on all three airlines. You can earn Qantas Frequent Flyer points on both Qantas and Fiji Airways flights due to their codeshare partnership.

Loyal Virgin Velocity members stand to make the most of their membership by hopping on these Virgin Australia flights to earn Velocity points.

Fiji Airways may come up cheapest, but at the expense of a more limited luggage allowance and a mandatory stopover when compared with Qantas and Virgin Australia. Despite this, its travel date range is still quite wide-reaching – though not as wide as Qantas since Qantas has sale fares during peak spring/summer dates, which could make all the difference.