This week’s big altcoin moves have been cooking since June

All the biggest cryptocurrency price moves of the week, including DOGE, have something in common.

This week has brought some big cryptocurrency price moves, especially in the altcoin (the everything but Bitcoin) field.

ChainLink (LINK) can't be tamed, climbing about 30% in two days. VeChain (VET) is based in China, but now it's partying in the USA after chasing sustained price rises with another two-fold increase this week. We can't stop Stellar (XLM) either, which is now up more than 20% in the last day. Cardano (ADA), meanwhile, was initially born of Ethereum and now it's looking more and more like its mother's daughter after rising a tidy 25% on top of months of previous growth.

And as for Dogecoin (DOGE)... it came in like a wrecking ball.

One thing all these coins have in common is that their recent price movements have been months in the making.

This smiley virus has proven to be remarkably effective.

As with any pump and dump scheme, the organisers almost certainly bought up a lot of DOGE ahead of time so they could dump it on the participants later. These kinds of schemes aren't really about driving prices up as high as possible, so much as tricking a bunch of people into buying the organiser's coins at inflated prices.

If prices get too high, too many victims start selling their coins at a profit, which starts cutting into the organiser's profits. By keeping prices down you can take advantage of people's natural unwillingness to sell at a loss. Fake price targets (the ridiculous sum of $1 per DOGE in this case) also help keep the scam going by giving victims a false frame of reference.

And like many classic scams, the bait is the lure of quick money and the people who think they're the participants are actually the victims.

We can't be sure that this is what's happening. It might just be a genuine response to the obvious artificiality of markets these days, an incredibly topical performance art piece or an organic groundswell of interest in old memes. But it's not unreasonable to assume it's at least in part a pump and dump scam that's been in the making for a while.

Subscribers to the pump and dump theory can put it to the test by shorting DOGE on Binance, starting 9am UTC on 10 July, while Doge-bulls can do the opposite by trading MegaDogecoin (MDOGE, where the conversion rate is 1 million DOGE = 1 MDOGE) on Bitfinex, starting half an hour earlier on the same day. It promises to be an interesting day out for DOGE either way.

The other winning coins of this week were also leaving tracks back in June, and even earlier.

As we can see, all of the biggest winners right now were also delivering above-par price performance in June and even earlier.

In fact, one of the best predictors for the cryptocurrencies that did really well this week is that they also did well in June, which wasn't overall a great month for the markets.

Most of the coins that did really well this week were also among the few on Binance Futures that ended last month in the black. 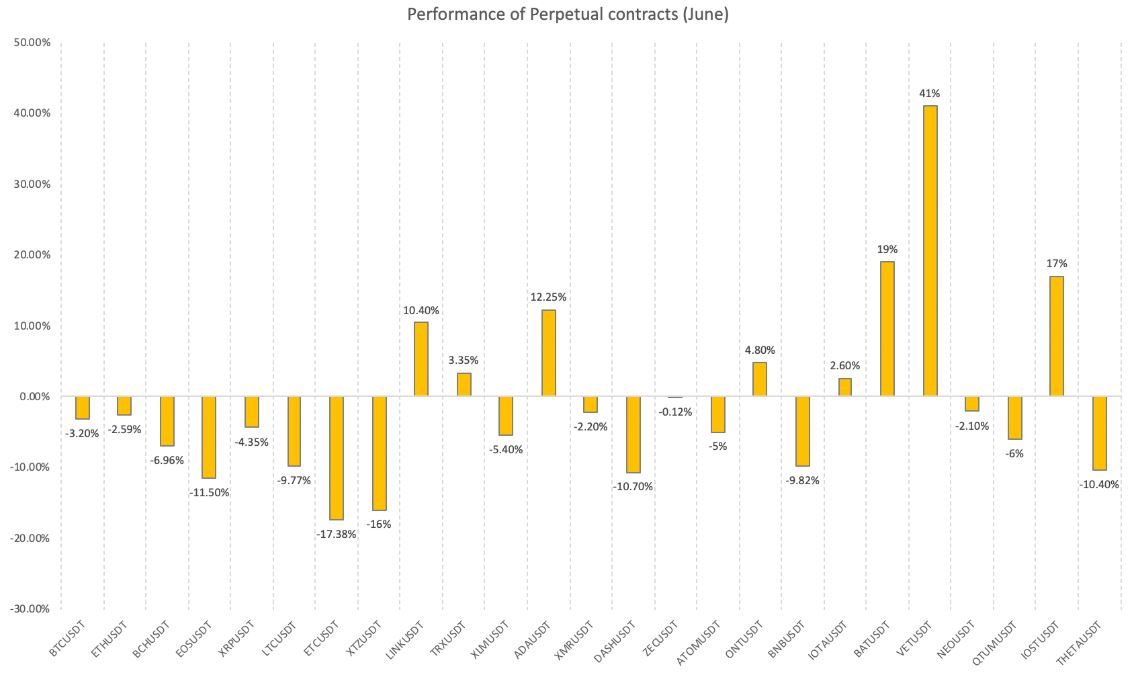 Of course, this is largely unsurprising because of course the coins seeing gains will become more popular. And it's also tough to draw specific conclusions about too many specific coins given that almost all alt coins are pumping up very nicely this week regardless of what they did last month.

The wider trend though is what appears to be a shift towards altcoins that began in June. According to the Binance June trading report, altcoins made up only 17.9% of volume in May, but 26.7% of volume in June, while Bitcoin shrank from 82.1% to 73.3%.

It could be because Bitcoin traders are bored of Bitcoin's recent stability so they went off in search of more excitement, or maybe it's the result of everyone who got into cryptocurrency ahead of the halving in May diversifying beyond Bitcoin. After all, it's tough to just keep holding Bitcoin when all the alts are taking off around you.

On the whole though, that's still what most people are doing.

"Bitcoin unsurprisingly retains its top spot as the most popular cryptoasset on the [eToro] platform globally in June," said eToro market analyst Simon Peters. "Having undergone its third ever block reward halving in May, investors clearly remain interested in holding on to the cryptoasset, perhaps in preparation for an ensuing bull run, as has occurred following the previous two halvings."

The shift towards altcoins seems to favour proof of stake coins, Peters added, which suggests that people could be seeing extra potential there.

"In altcoins, we are seeing a clear trend from investors towards blockchains that have proof of stake mechanisms... It would seem investment in many of these cryptoassets could prove to be well-judged for retail investors," he said.

"Recent months have seen investors look to cryptoassets such as Bitcoin as long term investment opportunities, given widespread fiscal stimulus and performance that has dwarfed most traditional equity markets. We expect to see this trend gather steam as coins such as ADA and Ethereum, of which the latter is undergoing its own raft of technical improvements, join Bitcoin as assets at the forefront of investors’ minds."

What will happen next month?

Maybe. Cryptocurrencies tend to pull back quite vigorously after big rises, and there have been plenty of those for VeChain and co. over the last few months, but that hasn't stopped them from continuing to go up. Even after these rises, they're still small caps compared to stuff like XRP.

An alternative theory is that we'll see a flip back to BTC and ETH.

Bitcoin has been very quiet for a while now. Its 30-day volatility is now the lowest it's been since October 2019. 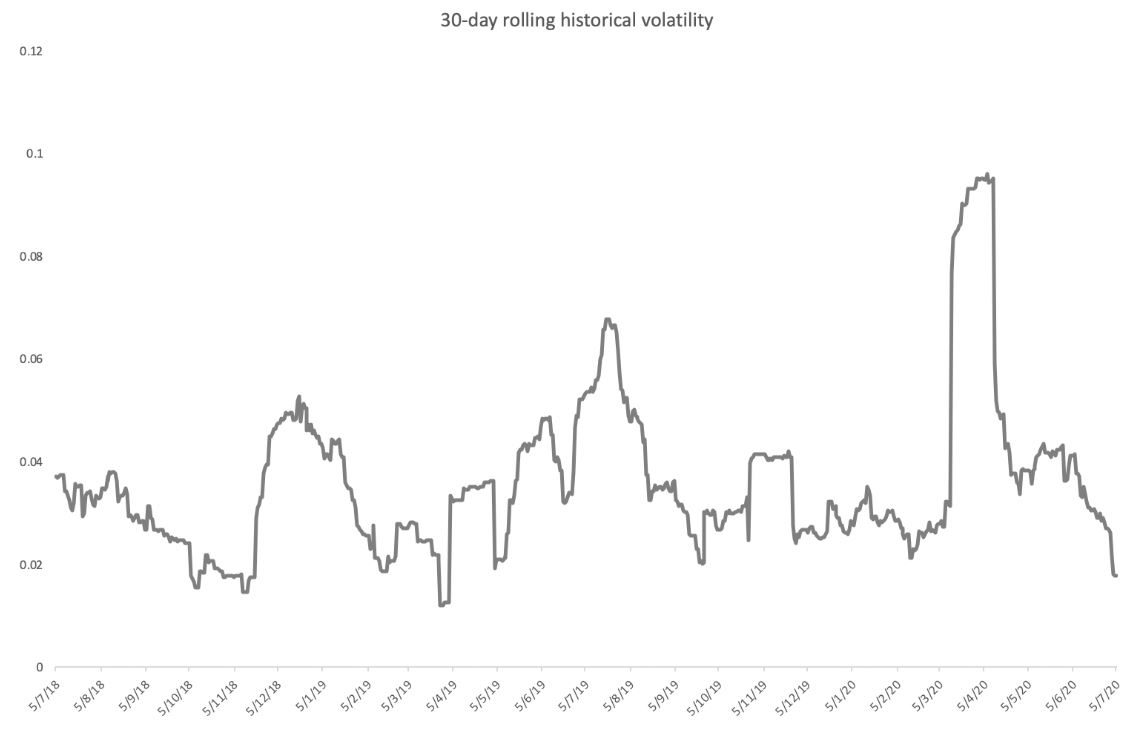 Historically, this kind of low volatility precedes great, cracking price moves in either direction. People locking in profits in BTC from their recent altcoin gains could be enough to wake Bitcoin up. Or maybe not.

Disclosure: The author holds ETH, BNB, BTC at the time of writing.