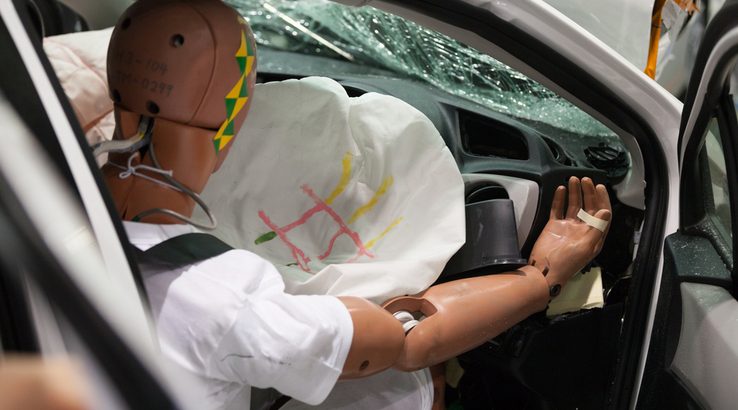 The finger of blame almost sprained itself in the aftermath.

Almost all tokens that come to life via the Binance IEO Launchpad follow a similar price pattern, which looks a little something like this:

It's not especially important which token is shown above because almost all of them follow a similar price pattern. See for yourself; pick out some random Launchpad projects and check their price performance since hitting the market. Odds are you'll see a pattern like the one above.

It looks like this because the folks who win the pre-purchase IEO lottery pick up the token at a discount, then lock in gains by dumping it as soon as possible. It's the system researchers found to be the most efficient way of "investing" in ICOs. The only thing that matters is that you can pre-purchase at a discount and then dump it as soon as it hits the market.

But Matic was different because it also went back up, multiplying back to be even higher than its post-launch all-time highs, with a multi-week rise that began on 22 November.

That climb just ended, with Matic plunging 70% in about half an hour. It was a beautiful crash, even by cryptocurrency standards.

It all happened fast, but in the aftermath, people started looking for someone or something to blame because "organic trading activity" apparently wasn't going to cut it here.

The first place the finger of blame went was right in the eye of a tweet about the Matic team transferring 15% of the total token supply to Binance for liquidation. 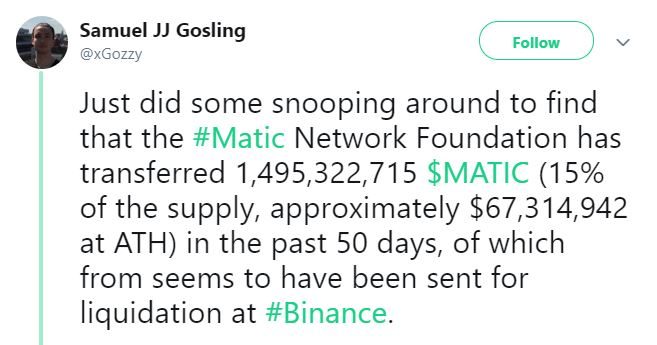 This apparent finding came as a heck of a surprise to the Matic team, whose response was essentially "no", or even "heck no!"

They were backed up by Binance itself, which attributed the crash to panicked whales who saw the tweet and then dumped their holdings in response. 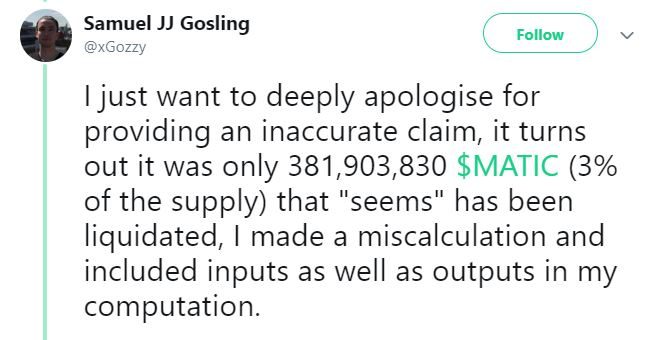 But Matic holders and other hanger-ons already had their pitchforks sharpened and ready to go. Somewhere in the distance, a voice complained shrilly about "FUD" and "fake news" and someone, somewhere, probably unironically accused Samuel Gosling of trying to shill some rival project he's never heard of before.

But then someone pointed out that the big price dump actually happened a solid four hours prior to the errant tweet, so none of that made a difference.

Against all odds, the Matic dump was just another market movement, sparked by nothing in particular except a whale's desire to lock in some profits.

The question of organic market movements, and what qualifies as organic, was back on the table.

"Matic has been relatively illiquid, and Binance also allows users to margin trade the token. Both of these factors likely contributed to the sharp fall," says The Block's Larry Cermak.

Others suggested that it was just a single Matic whale profitably dispensing of their tokens after pumping it up in the preceding weeks.

And in the end, it comes back to the age-old question of whether the illiquid, unregulated, high-leverage cryptocurrency markets could use some kind of rule system to adjust market behaviour or to "regulate" it, if you will.

The answer isn't clear or easy, and it largely comes back to the same dichotomy regulators face the world over:

Traditional markets vary but tend to skew more towards the latter, while cryptocurrency markets naturally move towards the former.

As it stands, trading or holding any cryptocurrency comes with an inherent risk of getting abruptly burned because that's just the nature of the market. Manipulation is perfectly natural in illiquid, high-leverage markets.

In the aftermath, the Matic conversation has shifted towards the question of whether Binance is obligated to put guardrails on its own marketplace and whether it has a responsibility to protect retail speculators from whale attacks.

There's no clear answer. But the Matic project might be the main victim in all of this, which just goes to show why a legitimate and promising cryptocurrency project might increasingly prefer to raise funds privately and avoid the open markets for as long as possible.