The Walking Dead Season 10 Part B: When is the zombie hit coming back? 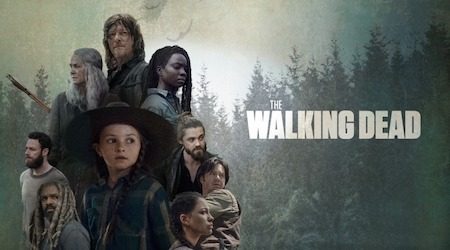 After an agonizing wait, The Walking Dead continues the war with the Whisperers.

The worst thing about The Walking Dead? That we're sometimes expected to wait patiently for months between episodes in the middle of an ongoing season. Alas, as far as Season 10 is concerned, the wait is finally over, with the finale, dubbed a special event, scheduled to air this October.

The Walking Dead Season 10B started airing in February. However, due to the COVID-19 pandemic, post-production on the season finale could not be completed by its planned April 12 airdate, so it was postponed. At least, fans will now be able to see how the epic confrontation between the survivors and the Whisperers goes down.

Despite suffering through some cast shake-ups and bumps in quality over its extensive run, The Walking Dead remains a treat for fans of the genre, featuring kick-ass action scenes, excellent character moments and bonkers plot twists. Whether you're looking forward to the finale or are eager to give the show a chance for the first time, here's everything you need to know to tune in.

In Australia, the Season 10 finale of The Walking Dead, titled A Certain Doom, will become available on 5 October. You can tune in on Fox Showcase for the premiere at 1pm, or catch a replay in the evening from 9:35pm. You can also watch the episode on demand on both Foxtel and streaming service BINGE.

In a surprising move, The Walking Dead creators announced that Season 10 will feature six extra episodes after the season finale, which will air in 2021.

Where to watch The Walking Dead Season 10B

Foxtel and BINGE are your go-to source for The Walking Dead content. Episodes air on Fox Showcase, which is part of the Foxtel Plus channel pack. Subscribers can watch new episodes live on TV or on demand with a Foxtel subscription. Seasons 1-9 are also available on demand.

Alternatively, you can watch The Walking Dead with Foxtel Now. The series is also available to stream on BINGE in its entirety.

What is The Walking Dead about?

If you're new to the show, The Walking Dead follows a group of survivors during a zombie apocalypse, who need to band together and find a way to survive. That's putting things simply, as plenty of developments occur over the course of the first ten seasons of the show.

Who stars in The Walking Dead?

Is The Walking Dead any good?

Yes. The show currently has an overall 81% score on Rotten Tomatoes, with the last couple of seasons particularly strong. So far, Season 10 has earned praise for delivering compelling stories and exciting adversaries for our heroes to confront.

Despite the name, The Walking Dead is still alive and kicking, proving to be a treat for both longtime fans and newbies. However, Season 11, which will premiere in 2022, will be the show's last. Not to worry - several spin-off series are already in the works.

The Walking Dead airs on Fox Showcase, part of the Foxtel Plus base channel pack which is $49 a month. The pack comes with 50+ channels of entertainment, drama, lifestyle, new, docos, reality and more. Subscribers get the iQ4 box, which lets you record live TV and enjoy content in 4K video quality. Users can also stream content from their channel packs live or on demand with the Foxtel GO app.

Fox Showcase is also available with Foxtel Now, the telco's streaming service that lets you watch Foxtel channels live and enjoy content on demand, all through the Internet. You can watch The Walking Dead with the Essentials pack, which costs $25 a month. New users get a 10-day free trial. Check out the best shows on Foxtel Now to get started with the service.

You can also watch The Walking Dead, as well as prequel Fear the Walking Dead with BINGE. The streaming service offers a generous library of TV shows, movies, docos, reality and more. Subscriptions start at $10/month with a 14-day free trial available for new users.

Based on the 1997 classic horror movie.

Foxtel is set to release Flash in Q4 2021, a standalone app for multiple news services.