The right drink can give you so much more than a hangover in this thought-provoking cyberpunk adventure game.

Games are no strangers to ethical quandaries. From BioWare RPGs like Star Wars: Knights of the Old Republic and Mass Effect to narrative-focused adventure games like Telltale's The Walking Dead, the subversion of the altruistic and infallible hero has brought us some of gaming's most compelling tales, making their adventures relatable in spite of their fantastical settings.

For as heavy as many of the decisions in such games are, they rarely feel as relevant to modern life as those that The Red Strings Club has you make. At first, the pixel-art cyberpunk adventure game seems to hang its fedora firmly on such well-trodden themes as AI sentience, human augmentation and free will, but as its intriguing tale unfolds, it starts to ask questions that lurk just beyond humanity's horizon.

What if we could eliminate depression, hatred and prejudice, but only by artificially inhibiting human emotion? What would happen to our creativity if we could never experience misery or anger? What would become of our survival instincts if we never felt the drive of fear?

These questions – and many other equally murky conundrums – form the basis of The Red Strings Club's captivating narrative, one that had me hooked from its intense opening scene to its trippy conclusion. Coupled with its endearing protagonists – a spirit-channelling bartender and his virtual ventriloquist sidekick – The Red Strings Club has set a high standard for the rest of 2018 to live up to. 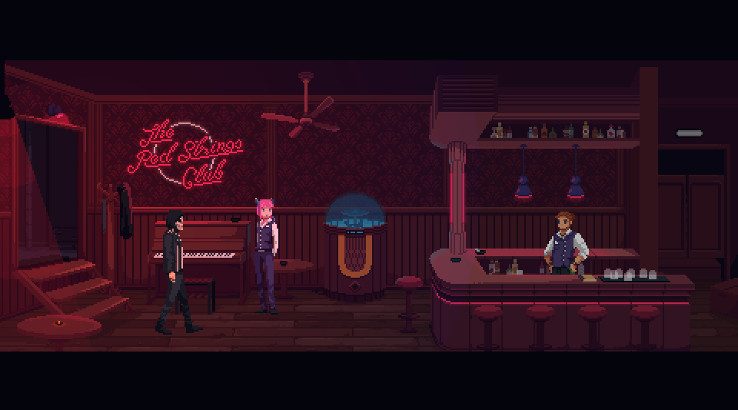 From its very first scene, The Red Strings Club establishes itself as something more than your average point-and-click adventure game. For the majority of its story, you take the role of Donovan, the bartender and proprietor of the titular Red Strings Club. Donovan's not just a dab hand at mixing drinks, though: thanks to powers beyond his ken, he has the ability to tune into his customers' souls and concoct beverages that evoke specific emotions like euphoria, vanity, fear and madness.

This peculiar little trick comes in especially handy for Donovan's other occupation: information broker. By serving his customers the right drinks, he's able to squeeze more out of them than a recount of their bad day at work, and over the years he's carved out The Red Strings Club as the go-to source for valuable secrets in a city run by clandestine megacorps.

It's only when a malfunctioning android stumbles into The Red Strings Club that Donovan's talent finds a purpose greater than merely lining his pockets. In a matter of minutes, Donovan finds himself embroiled in a global conspiracy involving mind control, megacorps and moral philosophy the likes of which he's never seen. 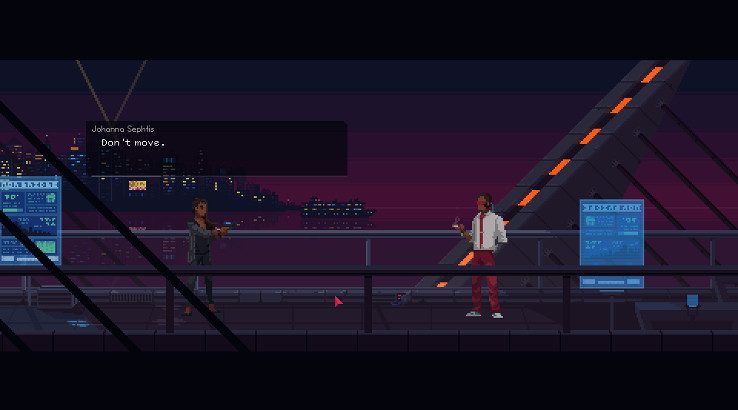 That's pretty much all I'm going to say about The Red Strings Club's story since, like most narrative-focused adventure games, the twisting tale and the many ethical dilemmas it confronts you with are the main reasons for playing it. That said, The Red Strings Club has a few more tricks up its stylish sleeves with the way it delivers its story and lets you shape how it unfolds.

Donovan's bartending skills, for instance, manifest in the form of a mini-game where you combine different spirits to tune the emotional core of a drink so as to influence a customer's mood. This alone is a neat mechanic, but what makes it more than a mere diversion is the way it integrates into the core narrative: to piece together the mystery at the heart of the game, you must use Donovan's powerful concoctions to juggle patrons' emotional states such that they'll be willing to answer your questions.

Though it starts simple enough, predicting which mood is most likely to draw out an answer quickly becomes quite challenging, demanding as much empathy and intuition as cold logic. There are no second chances, either: if you fail to get the response you wanted, you can't do the typical video game thing and simply ask the same question again. 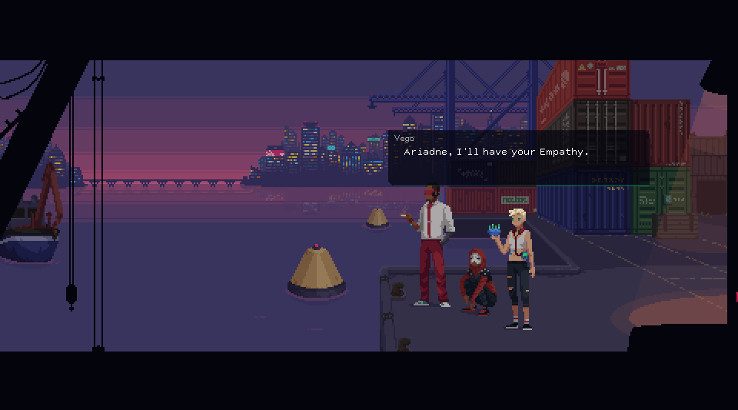 For a game that leans so heavily on dialogue and debate between its characters, it's fortunate that The Red Strings Club is as well-written as it is. Conversations flow naturally, and each character has a distinct personality that helps establish them as thinking and feeling actors within the world.

More than that, the format of conversations goes beyond the deadpan staring contest so many games rely on. Along with the bar-top discourse, you'll take pop quizzes from a sentient android, impersonate high-ranking megacorp execs in a cold-calling social-engineering stunt and "help" people unhappy with their current lives by outfitting them with genetic implants moulded out of biomatter in a quirky form of futuristic pottery.

As wacky as all that might sound, one of the things I appreciated most about The Red Strings Club was how grounded in real science it is. Not only are the ethical concerns raised the very same ones AI programmers are facing right now, the technology and psychology driving the main plot has its roots in current-day research. A lot of science-fiction stories tend to err more towards the fiction than the science, so it's refreshing to experience a narrative that doesn't resort to hand-waving technobabble and deus ex machina solutions to weave a compelling tale.

We reviewed The Red Strings Club on PC with a copy provided by the publisher.

Few games cause me to reflect on my own morals and ideals as deeply as The Red Strings Club. Thanks to its intelligent and relevant cyberpunk narrative, I feel like I've learned more about myself and come away better for it. If you have any interest in the ethical obstacles facing humanity in the near future, you owe it to yourself to sit down for a drink at The Red Strings Club.

The best on the box: Our top 10 Xbox One games of all time Iconoclasts review: From development hell to heavenly results