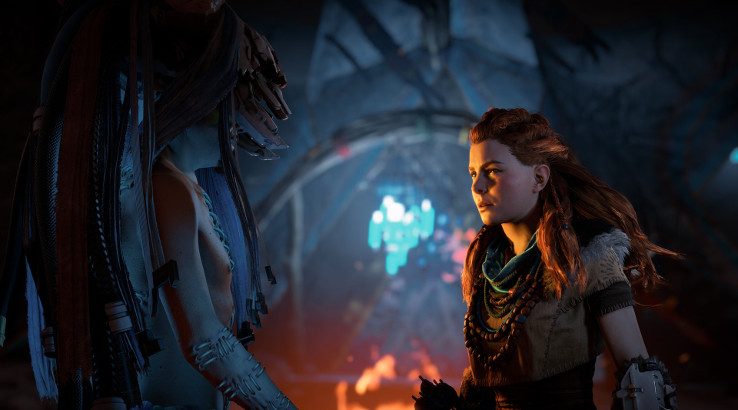 PAX Australia opened its doors today, and developers from around the world have flooded to the humble city of Melbourne, Victoria to show off their latest creations. While the pace of Australia's biggest gaming event has kept us on our feet, we found a few minutes to sit down with Sydney's own Tim Stobo, lead quest designer on Horizon: Zero Dawn's upcoming expansion The Frozen Wilds. While Tim couldn't speak too openly about the specifics of The Frozen Wilds for fear of spoiling the story, he did share with us some interesting tidbits about the development of both The Frozen Wilds and the original Horizon: Zero Dawn.

The first thing we asked Tim was what lessons he had learned over the course of developing Horizon: Zero Dawn, and how those were being applied to The Frozen Wilds.

"We knew this going in, but what we learned from the release of Horizon: Zero Dawn is that there are characters that fans absolutely love," Tim told us. "There are always characters that we love as well, but it's always interesting to see which ones stand out. We basically redoubled our efforts to find ways to have more meaningful interactions between Aloy and characters. There are just more people in the world that you can have deep relationships. That's really important for us in the questing.

"I don’t think our quest design process has necessarily changed that much, but what we have seen is there are a lot of quest types that resonate with players. I can't go into the specifics of them right now, but basically we're always interested in telling really interesting stories and having really memorable characters that players can interact with and have a relationship with. That is a really big part of our process, is working to develop stories and characters that will be memorable for players, across Horizon and The Frozen Wilds."

One of the more curious revelations during Horizon: Zero Dawn's development was that it would use the Decima engine, the engine developed by Kojima Productions to develop its upcoming game Death Stranding. We wanted to know what it was like working with Decima, and how it compared to other engines Tim had worked with.

"The Decima engine and the toolset we have is glorious," Tim told us. "I absolutely love working with it. Obviously it's been in development for a long time, but over the course of Horizon more and more features came online, and it's just such a powerful toolset that everyone loves working with it. Obviously it's a continual process of improvement, and we'll keep working on the engine, but some of the things that the engine has enabled us to do is we've gotten a lot more water interaction in The Frozen Wilds. The machines and Aloy leave wakes behind them and splash.

"We've also been able to add more technological depth to interaction with snow. If you've seen trailers, there's a lot of really deep snow around, and it's not just for show. As machines and Aloy and NPCs move around the world, you'll leave tracks and you can follow people's tracks. It's something that we feel adds to the immersion of The Frozen Wilds.

"For me, Decima is really nimble and really lightweight. It's incredibly powerful. And the best thing is that we have the tools guys down the road, literally down the office. Being able to work with amazing tools developers and an amazing engine team is the greatest strength."

As a studio renowned for its ability to push the technology of Sony hardware to its limits, we were curious whether Guerrilla Games had any plans to take advantage of the extra grunt of the PS4 Pro with The Frozen Wilds. Sadly, it seems those hoping to see what Guerrilla can do with all that extra horsepower will have to keep waiting.

"What we want to do is deliver an amazing experience," Tim told us. "If we can deliver that on the main PS4, then that is fantastic. If we can add a couple of bells and whistles and highlight the power of the PS4 Pro, then that's fantastic."

Back at the launch of Horizon: Zero Dawn, we spoke to senior producer Joel Eschler regarding knowledge-sharing within Sony's first-party studios. Joel gave an example where Naughty Dog was struggling with one of the Uncharted games, and Guerrilla Games came in and shared its knowledge of how to fix it. We were curious if Tim had experienced any similar sort of knowledge-sharing in his role.

"You've been talking about it yourself," Tim said. "The way Guerrilla and Kojima Productions is a great example of that. I can't give any specifics, but I do love the fact that we can look at another team and learn that they're doing something in a way that we're like "Why didn't we think of that?" and we can work with them to incorporate that into our development. I think that's a great thing about being a Sony studio."