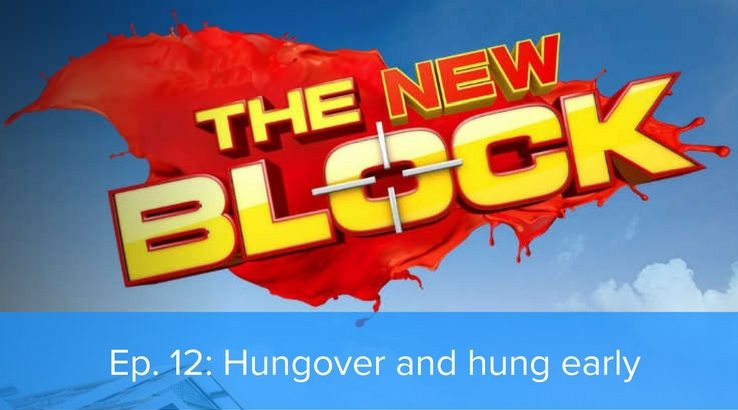 Some of our Blockheads party too hard, while others bend the rules.

We begin tonight’s episode with the revelation that the Blockheads are likely to have sore heads this morning, as they partied into the wee hours with Ben, Andy and Scott Cam following last night’s challenge.

It turns out Ben and Andy held an impromptu spelling bee at dinner, with $2,000 up for grabs. Sarah took out the prize, though it’s highly doubtful that the winning word was “superfluous”.

The next morning, Clint is considerably worse for the wear. A little peek at last night’s shenanigans shows us that not only is Clint an incredibly likeable guy, he’s an absolutely loveable drunk. Drunk Clint steals into Ronnie and Georgia’s room just to tell the confused, sleeping pair how much he loves them. He’s definitely that guy at the pub who throws an arm around you and declares that, he’s not just saying this because he’s five beers in, but you’re his best friend, man. In other words, me.

"Let's not lose touch after graduation!"

After a quick dip in the pool with Wombat to shake off the vapours, Clint is back in action and the teams hop in their cars for the drive back to Melbourne. Everyone, that is, except for Jason and Sarah. Apparently the two decided to make the commute back to Melbourne via continental drift, because the 90-minute trip ends up taking them five hours.

Their tardiness gets the pair in trouble with Foreman Keith, who has had the other teams hard at work weatherproofing their sites against an incoming storm. In a piece to camera, the couple explain that they’re struggling a bit with the competition as Sarah has a tendency to procrastinate and be disorganised, and Jason doesn’t care for manual labour. It’s easy to see how this exact combination of character traits convinced them they’d be perfect contestants for a renovation reality show.

There’s another storm moving in, this time in the form of Scott Cam, Shelley Craft and Alice Stolz. They’re here for their weekly session of throwing the contestants’ hopes and dreams to the floor and dancing a lascivious jig upon them.

As they go from house to house, there’s a brief break to pile more scorn upon poor Jason and Sarah. It turns out their plasterers got a bit ahead of themselves and plastered part of the hallway, a big Block no-no as it represents working ahead. Not only is this firmly against Block rules, it also violates Jason and Sarah’s entire ethos. Foreman Keith knocks holes in the plaster and rips it off the wall, which sends Jason into a bit of a funk. He’s frustrated that the pair are now moving backwards. At least it’s movement.

In the end, Josh and Elyse take out the weekly $5,000 Domain prize for their ambitious kids' room with its study mezzanine. While explaining their plan to Scott, Shelley and Alice, Elyse says the pair wanted to make the room “tech free”, because kids these days need to spend more time studying. Scott quickly takes the opportunity to mercilessly taunt the pair for their own abysmal performance in yesterday’s geography challenge, thus saving me the effort. Scottie does my job for me

The points tallied, Josh and Elyse score a 9/10, Sticks and Wombat’s kid adventure course gets an 8.5/10, tying with Ronnie and Georgia. Clint and Hannah receive a 7.5, and Jason and Sarah bring up the rear with 7/10.

As the episode draws to a close, Sticks proves his character by spending hours helping other contestants put down base coats of paint in their kids’ rooms. All the contestants, it turns out, except Ronnie and Georgia. Georgia tells us this is because the other contestants are jealous because she and Ronnie win so much.

This might be the time to remind Georgia that we’ve had all of two room reveals, and you’ve won exactly one of them.