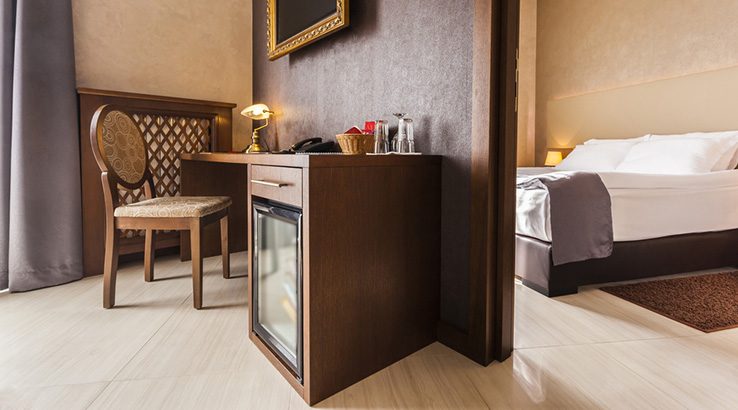 The price of convenience revealed.

It's no grand secret that opening the hotel minibar is like opening up a can of very expensive worms. Looking at the price list, you'll immediately notice mark ups on everyday groceries, such as a can of coke and a bottle of water, that no supermarket would dare charge.

But the minibar does bring with it the convenience of a snack in the wee hours of the morning when all the shops have closed and the benefit of not having to leave your room is all tto appealing. So if you do have to open that can of worms, what do you reach for?

We compared the price of the minibar at Sebel and Sofitel hotels with the supermarket cost to see which item boasts the smallest mark up and which you should steer clear of for fear of being ripped off.

What we found was, similar to duty free, the best value items with the smallest mark ups were alcohol.

The least marked up item in our mini bar was a 375ml bottle of Moet French champagne, which cost $64 from the mini bar, making it only 1.6 times more expensive than the supermarket's $39.99 price tag.

Snack-wise, it's a better option to reach for than that tube of Pringles, priced at $6, making it over four times more expensive than the supermarket's $1.42 price tag.

When it came to non-alcoholic drinks, the one to beat was a 600ml bottle of Mount Franklin water at $4.20 from the mini bar. Compared to the supermarket price of $2.17, it's just shy of double the everyday price and is a much better hydration option than a bottle of Evian, which sported a whopping $9 price tag at the mini bar as opposed to $3 in pocket change at the supermarket.

The most marked-up item of the lot? A packet of Herron paracetamol at $5.25 from the mini bar. It may not sound like a lot but compared to the $1.16 supermarket price, it bears a head-achy mark-up.

While the minibar can be expensive, finder.com.au's Angus Kidman notes that even if you avoid the temptation to crack it open, hotels can still sneak minibar charges onto your bill, so be sure to check before you check out so you don't pay for something you haven't used.